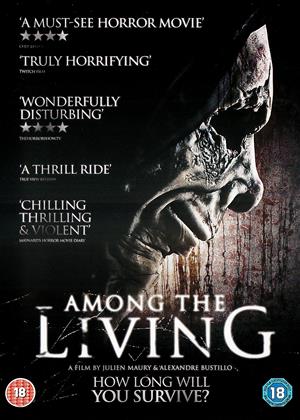 Reviews (2) of Among the Living

Brotherhood of blades - Among the Living review by ps

The only complaint I have against this film is the subtitles you do not get enough time to read them and this spoilt the film because I had to concentrate to much on the subtitles so I turned it off before I ended up with an headache!!

Weird, compelling and violent - Among the Living review by NP

You know how, in slasher movies, people get knifed/cut down/etc and then get up and carry on fighting? Well, to get it out of the way, it’s not really a spoiler to say there’s a fair bit of that during the second half of ‘Among the Living.’

That is the nearest I can come to any kind of criticism concerning a film that, from the pre-credits sequence until the final line, is terrific. Compelling. Weird. And violent! Three of the main players are 14 years of age, and their tender years gave me the feeling that things wouldn’t get too grim. Happily I was wrong.

No-one gets through this film without receiving some sort of bloody graphic punishment, and the audience is given no clue as to who will survive and who won’t. I had a great time with this subtitled French film and recommend it fully. My score is 8 out of 10.