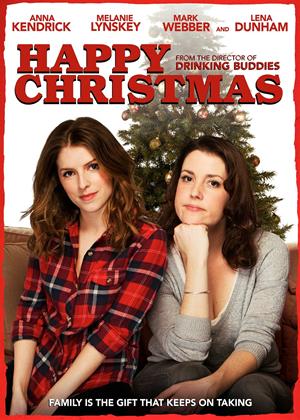 Happy Christmas is a movie that has all the components of a solid indie comedy. It has relatable characters in their late-20’s/early-30’s still trying to find themselves or coming to terms with parenthood. It takes place on Christmas where a bitter taste of loneliness is in the air even when three people end up crammed in a house with a baby. And it still has some heart in how the characters can display some amount of reason and compassion during their rocky journeys in life. You put them all together and you have one spiffy film concept. There’s only one problem: the script goes nowhere.

There is at least an interesting setup for something that could have been. The hipster party girl Jenny (Anna Kendrick) finds herself spending Christmas at her brother’s (Joe Swanberg). Kevin is now a stable enough director to settle down in his small house with his wife Kelly (Melanie Lynskey) and his one-year-old Jude. There’s clearly a bit of a disconnect as Jenny is more accustomed to staying up late, going to parties, drinking, doing drugs, passing out and sleeping with guys. Naturally, her lifestyle doesn’t mesh well with her brother and his wife. It’s hardly a surprise when they ask her to babysit for a day only to have her show up passed out the next morning.

After she finally gets her act together with the help of her gal pal, Jenny ends up doing a decent job babysitting. After the kid is down for a nap, Jenny helps loosen up Kelly from her seemingly quiet and sad life as a stay-at-home mom. She encourages Kelly to get back into writing books after having already written one. Her high spirits inspire Kelly to get back into her writing. For her Christmas present, Kelly seeks to use her husband’s office for a few days to get back into the swing of things. While it seems like Kelly’s life is getting back on track, Jenny still has rocky roads ahead as she falls for a boy and starts looking for her own apartment. And it isn’t too long before her directionless and complicated life takes its toll on the new parents.

This movie must have the same confrontational issues as Jenny because it never arrives at a true point of drama. Everyone is just way too nice in this film. When Jenny passes out at a party in the middle of the night, her brother is more than willing to pick her up and doesn’t speak much of it. When Jenny starts to grate on Kelly’s nerves with her constant chatter, Kelly approaches her with plenty of calm to explain her views. Kelly’s request to her husband to use his office for her writing is met with no concern, but clear understanding and compromise. Jenny’s brother stumbles onto her sister smoking weed and is entirely too understanding for doing it in the house.

Even when Jenny nearly burns down the house after she passes out while cooking is met with far too much empathy than any normal human being would be capable of for such an act. As a parent myself, I would not allow someone to stay in the same house with my little one when it ends up nearly burning to the ground. And, yet, the couple merely send her to her room as if she only broke a few dishes. She never really learns much of any lesson in the end either. Yeah, it sucks if you’re a confused 20-something who is entirely unsure of your future, but nearly killing a baby should probably be a major awakening. Instead, Jenny hides herself in Kevin’s office indulging on take-out until Kelly can coax her out.

Happy Christmas doesn’t really feel like a joyous holiday (or even a sad holiday) because it doesn’t make an attempt to provide anything interesting or noticeable. It’s packed with improv lines that don’t really build to anything. We never see the movie that Kevin is working on, we never see the culmination of Kelly’s book and even Jenny feels like she still has a lesson or two to learn. All the characters are there with a decent enough setup to drive this production, but writer/director Joe Swanberg leaves it idling in the driveway. Even the whole Christmas aspect plays so minimally into the plot that it almost feels like an afterthought. Forget being a Christmas movie, I’m just not sure what this movie wants to be period. The presence of Lena Dunham co-starring leads me to believe that this was almost a script for the TV show Girls that was never finished. When the film ends, it just ends. It’s not a happy ending or a sad ending, but just an ending with no major character growth or the conclusion of an arc. Even if this were intended as some long-running trilogy, I would still feel let down for such a neutral and innocuous excuse for drama and comedy.