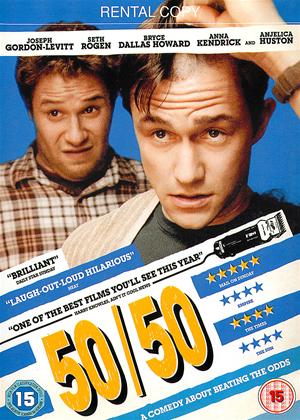 The critic's review is wrong: this movie is more than adequate (and it is WAY more intelligent and memorable than the tedious Knocked Up).

It is original, funny, well-written, and moving at times though overblown and emotionally sentimental at others (I suppose some like the other reviewer would cry at these yawn-inducing moments - where the director gives his American audience the hugs and tears they love so much). However, this gurning sentimentality is countered by the arch and cynical dialogue elsewhere, rescuing the movie from its otherwise girly-girly movie emo-hell fate.

The weakest part of the movie is probably Seth Rogan, whose character doesn't need to be so crude either (the teen market is aimed for though) - the acting kudos goes to the key character actor and the women.

There are some killer lines which made me laugh out loud (the one about Frodo being one), and some well-drawn supporting characters, notably the chaotic tyro therapist and Angelica Huston as the mum.

And some refreshing male focus - where, for once, a man can't be sweet talked by a woman and instead does what he wants (the film is perhaps a typical female movie with male characters?)

A memorable and unusual comedy which rings true and has a nice resolution. Four stars and a bit.

Sounds a bit dubious, making a light hearted type of film with a young guy with cancer, but have to give it a 4 as is more than have given 3's to some pretty average stuff.

Not many films manage to do some acting, some comedy, and some moral aspect, all at the same time.

Not box offices set alight i suspect, as no big names present, but all do their jobs very proficiently. Some serious relationship issues dealt with quite credibly.............

I'm not going to bang on, I just felt I had to write that I went through every emotion watching this film. I rarely cry at films, but truthfully I literally cried my eyes out through some parts of it. Fantastic acting.

50/50 is theHollywood bro-mance movie about radio presenter Adam (Joseph Gordon-Levitt) who complains of back pains and shortness of breath only to suddenly be diagnosed with cancer whose treatment, he discovers, only offers a fifty percent chance of survival.

Adam seeks emotional support from his girlfriend Rachel (Bryce Dallas Howard) and his best friend Kyle (Seth Rogan), yet Rachel can not handle the strain of her boyfriend’s illness and cheats on him, leading him to unceremoniously break up with her. Adam’s emotional support now falls entirely on Kyle’s shoulders, hilarity ensues.

An interesting twist on a theme that is stereotypically female based, 50/50 is a perfectly adequate comedy movie whose only aspect of originality comes in the close relationship between Kyle and Adam. The treatment of women is rather misogynistic and sub-standard, but one can’t help but compare it to the depiction of men in similar such female based romantic comedies.

The jokes are predictable, yet funny enough to keep the audience amused throughout, whilst the acting skills and characterization is all of a fairly low standard, but one can’t help but feel that Seth Rogan essentially plays himself in all his movies, so it would be difficult for even him to screw this character up. Don’t get me wrong, I like Seth Rogan, I just find myself wondering why after the impressive originality of Knocked Up he would make something so unimaginative.

Far from one of Rogan’s more impressive endeavours 50/50 is exactly that, completely middle ground and average in every way; perfectly entertaining but equally forgettable.