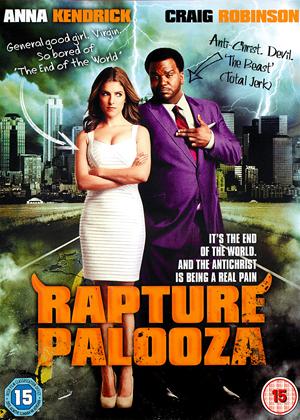 Twilight not-quite-star Anna Kendrick takes centre stage is this so-called comedy-horror about the coming of the religious rapture, but just as Twilight had all the romantic appeal of a dead trout Rapture-Palooza is about as funny as eating said spoiled fish.

Lindsay (Kendrick) and her boyfriend Ben (Bone’s John Francis Daley) are minding their own business on a perfectly harmless and mundane date at a bowling alley when all of a sudden half of the patrons simply vanish leaving nothing but the clothes they were wearing. The couple quickly discover that the prophesied Rapture, as foretold in the Bible, has occurred and that they, and all others left behind on Earth, are sinners, not worthy of a place in Heaven and doomed to suffer an eternity of Hell on Earth under the rule of the Anti-Christ – who for the purpose of this film is played by Hot Tub Time Machine’s Craig Robinson.

That’s the least of the couples problems however as, upon catching sight of Lindsay, the devil himself decides he wants to make her his bride.

For those in the audience who already saw Craig Robinson’s performance in this year’s other big doomsday movie This is the End you may be tempted to compare the two movies, yet honestly they could not be more dissimilar. Where Seth Rogan, Jonah Hill and a host of other well known popular comedy faces pulled off a sparky and fun apocalypse Rapture-Palooza struggles to be called either a comedy or a horror.

The sheer lack of creepiness inherent in the two big bad’s of Rapture: the zombie like Wraiths and Robinson’s dapper Anti-Christ prevent the film’s story from ever really taking off, whilst the unbearably poor script makes causes every moment of on screen drama to last a pain-stakingly long lifetime. The effort put in by the cast does nothing to aid such a hideous script and the desperate attempts at jokes are as un-apostatizing and flaccid as the aforementioned trout.

Ultimately I would avoid Rapture-Palooza like it was a Biblical plague; otherwise it is likely only to be you who suffer like a cursed atheist sinner.