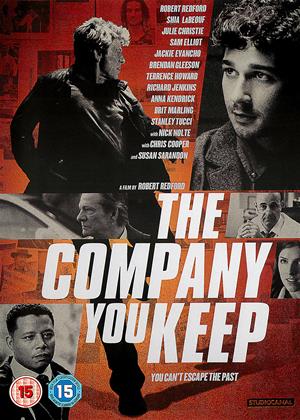 Reviews (1) of The Company You Keep

Way back in the late 1960s through to the mid 1970s The Weather Underground was a student-led militant anti-war protest movement, aimed at stopping the Vietnam War by violent direct action after years of ineffective peaceful protest.

'The Company You Keep' is set some 40 years after these events, and is a fictionalised account of how a group of young activists have disguised their past, growing old and respectable, hiding in full view in mainstream society - while still wanted for murder after the death of a guard in a bank robbery. All has gone well with their lives, until one of their number turns herself in to the FBI.

I've never liked the work of Shia LaBeouf, but here he is quite well cast as the reporter, who doggedly unearths not only Jim Grant's dodgy past, but tracks down other Weathermen involved in the bank robbery. Robert Redford goes on the run, meets up with Julie Christie, LaBeouf follows him, it all ends happily...

What seemingly starts out as a political thriller with a few nods to the problems of print journalism in an on-line age, degenerates into a run-of-the-mill chase thriller. Complicated by a cast of grey-haired actors who all seem to look alike so that it's difficult to tell who's who, the film begins with an interesting premise then descends into something only just above average.

I had recently seen Julie Christie in her break-through role in 'Billy Liar' and wanted to see what her recent work looked like. Now I know - and it's not as interesting as the part she played in the last film of hers I saw, 'Away From Her'.

Robert Redford not only has the lead role but also directed and co-produced. It's a competent film and I'll give it 3/5 stars - not bad, but not quite good enough for 4 stars.

The Company You Keep review by George Hooper - Cinema Paradiso

While most would point to All is Lost as the Robert Redford film to watch from 2013 and they would be right considering the naval drama is everything a good survival story should be but The Company You Keep also has Redford on top form, both behind and in front of the camera.

The Company You Keep follows investigative reporter Ben Shepherd (Shia LaBeouf) as he starts digging into a story about a group of activists who went into hiding because of something they did in their past. However when Ben’s investigation brings him to Jim Grant, one of the former members he forces Jim to go on the run from the life he has been living for years.

Not only does Redford direct but he also portrays an interestingly flawed man forced into things out of nobility more than anything. Redford has also found a worthy lead in Labeouf as he brings Ben to life while avoiding the cliche of a reporter, something Redford has a little experience in. The film is also peppered with plenty of fantastic actors with Susan Sarandon diving straight into her limited role, ultimately giving the film its richest scene early into the picture.

While there is a certain element of spot the A lister the film doesn’t feel like a cash grab, in fact each performer is giving their all to this nuanced conspiracy thriller. The feature is smartly written and more than a little relevant to today even if the crux of the films story happened years prior. The Company You Keep isn’t perfect, it’s ending feels incomplete with many a question unanswered but the film is so rich and full of many beautiful elements you can’t help but appreciate the return to the paranoia thrillers of the 1970s and everything they had to offer.