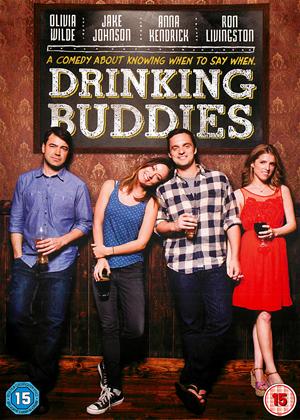 Well, that was a deeply unsatisfying experience. One of those 'beautiful wild chick' films that has left me feeling nothing.

Total waste of 87 minutes of my life.

Your time would be better spend watching Anna Kendrick do her 'Cups' routine 20 times over.

oe Swanberg is known for a unique style of filmmaking and Drinking Buddies while his most expensive and star studded film yet proves no different as it concentrates on the moments between the action, the conversations that really matter in a friendship or a relationship, the stuff that means more than the fantastical. As such, Drinking Buddies is a terrific emotional drama about regret and unrequited love featuring Olivia Wilde’s best performance to date.

Following the story of two brewery workers, Kate (Olivia Wilde) and Luke (Jake Johnson), Drinking Buddies tells the story of their complicated friendship as they both seem to find themselves dating people when unexpected feelings develop between the two. Luke is happy with Jill (Anna Kendrick) while Kate is comfortable with older Chris (Ron Livingston). The two find themselves contemplating their lives and where they go from now.

While never exciting in the way conventional films are, Drinking Buddies is a light hearted and superbly written character study into the lives of these broken individuals. Much like this years Breathe In the film deals with feelings of inadequacy and regret as the two try to realise the lives they could have led together. The two struggle and Wilde makes Kate, a borderline repugnant character shine as an empowered woman, despite the shameless things she often finds herself doing. Luke on the other hand is dependable, a considerate yet cowardly man intent on staying in his current relationship partly because it provides him a safe bubble with which to live in.

Livingston and Kendrick give stellar performances also with Kendrick proving a rising star whose film selection goes from good to excellent. Jill to some extent proves a perfect match for Luke, the two of them prove to be as damaged as each other while they still rely upon one another for support. Swanberg always walks the line with his characters as to whether you should like them. He enjoys bringing the worst out in people only to make an audience like it.

Drinking Buddies is a masterful relationship drama that may lag in its second act, which becomes one extended sequence of worst case scenarios, but it shows a side of people you rarely see in films, a part of peoples lives you never really thought was worth watching but it really is.