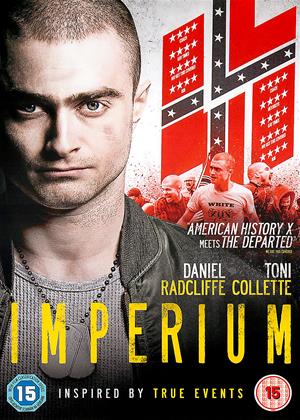 In his worthy attempts to divest himself of the boy wizard, Daniel Radcliffe for once makes a poor career choice as an FBI agent who infiltrates a neo-Nazi group. Alongside the big and brutish gang members his earnest Boy Scout character never convinces, nor does Toni Collette as his curiously light-headed boss. The film is well-intentioned and there are a few good scenes, but it never generates much excitement and trundles on to a damp squib of a climax.

no peril = no interest - Imperium review by MA

Not good,no peril for the position of the fbi agent,except once for a short period.Radcliffe miscast,needed somebody that could project a bit of menace when dealing with the very violent thugs he had to,it just became unrealistic that these horrible people would accept him so quickly when he only projected weakness,more likely he would of been eaten alive by them.

Unrealistic, implausible and totally predictable – Imperium waists quite a talent (mostly Daniel Radcliffe) in thin air whilst trying to develop both thrilling and dramatic portions that, ultimately, constitute nothing more than a clichéd and uptight plot going nowhere in particular. The film is also plagued by many blunders, granted you’ve already taken your suspense of disbelief to a whole new level. These don’t break the movie per se, but sure as hell don’t make it either. If not for Radcliffe’s on-spot performance, Imperium would crumble under its own hiccups in a matter of instantaneousness.

Needless to say, the film is not very good.

Imperium follows Nate Foster, an FBI rookie who wants to rise up to the occasion by proving himself to his superiors in a mission that requires both physical endurance and an incredible amount of wits. During which, he stumbles upon various obstacles (due to a weak screenplay) that magically transport him from one important place to another to forward the plot. Nate’s boss is one Angela Zamparo (played by Toni Collette) and unfortunately, comes off as nothing more than a cardboard cutout eager to deus-ex-machina Nate out of danger always when said Nate fails to fulfill expectations and ends up messing things up even more.

Furthermore, when you see Radcliffe trying to impose his presence among white supremacists whose muscles exceed their brains by a significant margin, you cannot help but feel as if the former boy wizard was (probably) miscast in this particular role.

From here thereon, the story devolves into a ridiculous thread of people running around and doing good things (the FBI), while another group of people runs around trying to do very bad things (the Neo Nazis). Good guys need to prevent bad guys from ding bad things, because, as undercover agent Nate puts it: “For evil to triumph, it only takes good men to do nothing.” Thanks for the grand revelation Daniel.

Undoubtedly, the film has a strong premise: a conflicted undercover agent in wake of his morality infiltrates a group of radical white supremacists and ponders if what he does is acceptable to his moral standards and ethical threshold. If only the film got past it and elaborated further on how exactly these people think – leave aside their portrayal as crazy bad guys whose intention is glued to wreaking havoc among those who differ in their radical thinking.

For a first timer, director Daniel Ragussis can really use a helping hand to show him how things are done the professional way. Not to say he doesn’t follow protocols: it would be rather more effective if he broke some rules instead of following them blindly toward a mediocre pedestal that does good to no one in particular.

Surely Imperium will be compared to American History X, and will end up as the lesser of the two any time of a given day. Still, one can learn something from Imperium – if only to know how great movies are NOT being made.