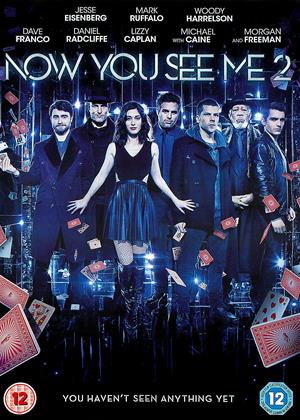 Synopsis:
The Four Horsemen return for a second mind-bending adventure, elevating the limits of stage illusion to new heights in an adventure that takes them around the globe. One year after outwitting the FBI and winning the public's adulation with their Robin Hood-style magic, the illusionists resurface for a comeback performance in the hope of exposing the unethical practices of a tech magnate. The man behind their vanishing act is none other than Walter Mabry, a tech prodigy who threatens the Horsemen into pulling off their most impossible heist yet. Their only hope is to perform one last unprecedented stunt to clear their names and reveal the mastermind behind it all.
Actors:
Jesse Eisenberg, Mark Ruffalo, Woody Harrelson, Dave Franco, Daniel Radcliffe, Lizzy Caplan, Jay Chou, Sanaa Lathan, Michael Caine, Morgan Freeman, David Warshofsky, Tsai Chin, William Henderson, Richard Laing, Henry Lloyd-Hughes, Brick Patrick, Zach Gerard, Ben Lamb, Fenfen Huang, Aaron Ly
Directors:
Jon M. Chu
Producers:
Bobby Cohen, Alex Kurtzman, Roberto Orci
Writers:
Ed Solomon, Peter Chiarelli, Boaz Yakin, Edward Ricourt
Aka:
Now You See Me: The Second Act
Studio:
E1 Entertainment
Genres:
Thrillers

I loved the first film, a great and original idea that made for a terrifically entertaining movie, so I groaned the minute I saw they were doing this sequel because the original was truly a one-off.

Full marks to the scriptwriters for the way they managed to create a second movie by twisting virtually everything from the first, but really this was just unbelievable hokum, played at a frenetic pace to hide the numerous cracks in every aspect of it. I found myself not caring about either the characters or the story any longer, and I commend Isla Fisher on her impeccable taste in deciding to give this one a miss!

Defiantly missable - Now You See Me 2 review by TS

Dreadful sequel. Appalling sound. We lasted 15 minutes before hitting the eject button. I would commend it to all those aged 7 and below.

If liked the first one OK will watch this one OK. At least not excessive or continual F word, like most offerings from US. Maybe Trump has some input?

Is bit of light fun. Not the same characters as in Red films, and Michael and Morgan just going through the motions, but passes the time. Loads worse about, and i mean loads.

I had to start watching this film twice as it was so fast moving & I had forgotten the original as it was so long ago. Ended up enjoying it.

I really liked the First 'Now You See Me' and was sad t o see a slight change to the cast in this the second movie ,But was very entertained by the slick and clever trickery and choreography on offer in Part 2. and nice to have a few more revelations along the way .

Like the First Movie the Horsemen are on the side of Right ,even though they are International Criminals ,and pull of yet more audacious trickery to get ther job done . a few new faces and a few old ones showing up on the journey that takes us around the world From the US to the UK via the Orient .Great Entertainment , and unlike a lot of Action/Crime movies ,suitable for ALL the family .

I have watched the first movie on DVD but have very little memory of it - how movies work these days, like the awful Marvel superhero sludge. All about data and stimulating the attention-deficient young audience, like modern EDM pop music.

Anyway, this was all fast-paced and had enough 'magic' in it to satisfy. Decent special effects. And acting incl old masters Morgan Freeman and Michael Caine who gets to keep the house he buys with the massive cheque again as he did for Jaws 2.

Loved the locations too - much of this was shot in Greenwich, the colonnade at the old royal naval college used in so many movies - from the Music Lovers early 70s to the King's Speech, to Master and Commander and literally hundreds more.

Clearly aimed at the Chinese market with big set pieces and in that just like modern Bond movies which are just Bourne templates really.

Likes the music too so 2.5 stars rounded up.

Watching the sequel to Now You See Me is very much like watching the 2nd presentation of a magic show you've already seen prior. I’ve seen these tricks before and notice minor differences between the two performances. Some of the cleverness still makes me smile, but the repetition drains some of the amazement. It’s just not the same the second time around.

The Horsemen, the magician group that specializes in heists with the public as their audience, have returned from the shadows for another caper. With the new addition of Lizzy Caplan to the ensemble that includes Jesse Eisenberg, Woody Harrelson, Dave Franco and Mark Ruffalo, their latest target is a mobile phone mogul they intend to humiliate at a press event. With their fast talking, quick disguises and slight of hand, the group successfully infiltrates the events and wows a crowd. But they are soon captured by the evil tech mogul Walter Mabry (Daniel Mabry) - labeled as an antagonist for his distaste of magic. He desires a computer chip in a Chinese data facility and forcefully employs the Horsemen to retrieve it for him.

It’s up to the Horsemen to work together as a team to find a way out of this scenario and the movie never wastes a moment to state how the Horsemen are a team. But they’re only a team in the way everybody talks about them as such. There isn’t a whole lot of chemistry between these magicians that mostly trade insults. It almost appears as though each actor has their own scene, refusing to let the other actors step over them. Lizzy Caplan in particular is trying far too hard to stick out as the strong female of the group that her scenes become excruciating to watch.

A good magician never reveals his secrets, but these magicians can’t wait to divulge all their tricks. They do so during their heists to show off how clever they are in their schemes. The only problem with that is when they spend so much time revealing their secrets that it reached a point where I just didn’t care how any of this was done. They don’t even bother to explain some of their more elaborate outs and tricks as when Jesse Eisenberg falls back into a puddle of water and evaporates. The answer is CGI and I doubt it’d be that impressive if The Horsemen explained how render passes work. And the rest of their tricks involve them disappearing without a trace from certain areas, making them appear less as magicians and more as ninjas.

Despite my distaste for most of the movie, I can’t fault it for being a fun caper. It moves fast enough, the cast is A-list, the locations are beautiful and the magic tricks are showy and clever (the ones explained at least). If you can suspend enough belief, the movie is actually enjoyable. But if you found it difficult to do so with the previous movie, it’s even more of a chore with this movie that has all the same problems. The big plot twist revealed at the end of the picture creates a real stopping point where you’re either forgiving of the picture running out of ideas or infuriated that all of this was leading up to such a ridiculous excuse of a finale. Having seen this twist before from this series, I was more disappointed than anything. The magic just isn’t there when you can see all the strings being pulled.