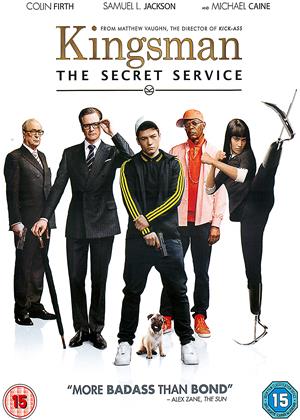 Reviews (6) of Kingsman: The Secret Service

Excessive Swearing & Violence - Give it a Miss! - Kingsman: The Secret Service review by CS

Awful, an absolutely awful film, not at all what I was expecting! This promotes itself as a cool, modern, swanky take on the James Bond franchise, and in many respects it is very much an amalgamation of The New Avengers vs Bond. This film tries way too hard and is trying to be a bit of a comedy at the same time as being an action movie. However with an excessively high amount of violence, bloody gore and unnecessary swearing, this is much less a family film and more one for the teenagers. In fact everyone I know over 30 who has seen this film has commented about the unecessary amount of bad language and violence in it, which detracts too much from the story line, which in itself I thought was very weak! One could easily be forgiven for thinking this was a Quentin Tarantino movie, especially when they see the excessively gory bloodbath which takes place three thirds of the way through in a church. I thought we were entering Tarantino Vampire territory for a moment via Kill Bill! I found the script and plot had massive holes in them, the acting was average, as were the special effects. This was really like an amalgamation of so many films and the style of filming reminded me very much of films like 'Divergent' and 'The Maze Runner', so a real mash of styles going on. I didn't find it a very smooth or well edited film and to be honest found it a real bore to watch. If you like your film plots paper thin, laden with special effects, excessive swearing and violence, then you'll probably love this. But Bond it most certainly is not!!

Kingsman is the best Bond film since Goldfinger… and Bond isn’t even in it. With current Bond movies mired in gritty realism and the Bourne franchise ruined by Greengrass wobble-cam, Michael Vaughn gives us an uproarious genre-savvy secret service movie that thrills as much as it amuses. From the opening set-piece with Jack Davenport as an urbane action hero, you know you’re in good hands here. As for Colin Firth… who knew that behind that stiff Darcy exterior lurked such effortless action-man potential? The set-piece where he slaughters a whole church full of rednecks to a soundtrack of wailing guitar from Free Bird is one of the most astonishing pieces of pure cinema in recent years.

An odd film - Kingsman: The Secret Service review by RD

This is a secret agent type thriller of the "kids-save-world-from-evil-maniac" type. The story line is weak and predictable, the screenplay is quite childish and does not give the impressive array of talent (Michael Caine, Samuel L Jackson, Colin Firth) anything to work on leaving the main characters with paper thin personalities and looking fairly daft in each scene. It comes across as a reasonable thriller aimed at around the 12 year old age range, written poorly and padded out with loads of special effects and continuous second rate Bourne trilogy music to try and keep it alive.

However, and this is where the film takes on a macabre aspect, we have a film for kids but packed with horrific scenes of violence with a character sliced in half, limbs and heads sliced off in amazing gory detail, and showing people with spears and knives going right through them in slow motion and with impressive special effects to make it so realistic. These scenes are extended and often go on for ages. In a kids film I find this disturbing, especially with the scene of a mother trying to attack her terrified two year old child.

I love Tarantino but his violence is shorter, more relevant and contained in well crafted films for grown ups. This is in a much lower genre.

The same for the swearing, this film is full of gratuitous F-words, occasionally useful to the situation but very over-used here and sounding quite awkward and strained as they are so overdone. And in a kids film!

Proper top quality movie, full of thrills, quality actors and story line! I thoroughly loved it to be honest!! 2nd best British movie after Trainspotting in my opinion!! A MUST WATCH MOVIE!! 5 stars all the waaaay!

Bit of a slant on James Bond.

Not sure why Sam Jackson and Michael Caine there, but am sure their bank manager was pleased. They will be doing more voice-overs for cartoons now i expect.

Colin Firth did his usual role with panache.

Looks like will be a sequel.....and all 3 main men with names killed off already, but Mark Strong will hold the fort.......

A well made film with some fantastic chase and fight scenes. It doesn't take itself too seriously and is therefore a great piece of all round entertainment. The cast are excellent and include a number of well known actors. I missed this at the cinema, which in hindsight was ashame. It is the type of film I would watch again and again.

From the very first second, I loved this film. It had everything you could want: interesting characters, action, cool gadgets, witty dialogue, a mix of experienced and novice actors, and so much more. I give this film four out of five stars, but even I don’t know what I would want added.

Forget the CIA and forget MI6; we have a new breed of knights. Kingsman: The Secret Service introduces us to Gary ‘Eggsy’ Unwin (Taron Egerton). Eggsy is far from sophisticated and far from responsible, and yet he is the perfect fit for this secret spy organisation. With a training program that is stressful at best, it is up to Eggsy to prove himself, and help thwart a new global enemy.

After only seeing the trailer, I could tell that the world of the film was more evolved than what we saw; and it didn’t surprise me to learn it began as a comic book. For the last few years especially, feature film adaptations of comic books has skyrocketed in popularity. Not only will that help this film to be successful, but it can also be an entertaining watch for those that love the Bond films. It is odd to find such a competent mix of these genres and styles, but Kingsman definitely did it and they chose an excellent time to release it.

When you are in a film with Colin Firth, Michael Caine and Samuel L. Jackson, you have to be something special to attract any attention. Of course these experienced actors played their roles well, but my favourite was undoubtedly Taron Egerton. Taron does not have an extensive film history, but he is quickly becoming a favourite of mine (see: Testament of Youth). It is unfortunate that his name is quite low on the cast list as they are wanting to flaunt their more accomplished cast, and I would be surprised if Taron doesn’t become a next ‘big thing’.

Kingsman: The Secret Service was directed by Michael Vaughn. This is far from the first film of the type by Vaughn, and he obviously knows what he is doing. The way he made the camera move was flawlessly in-sync with the post-production effects.

The effects were absolutely amazing. Of course some of the action and story is farfetched, but you won’t even care. I won’t deny that there weren’t some effects that missed the mark (such as the face-replace with Firth during a certain action scene), but nothing is perfect.

Critic and audience reviews have been widely positive. The majority really seemed to find the film entertaining, and a mostly-consistent adaptation.

I would recommend this film to anyone. The film does run for just over two hours, and contains language and content inappropriate for young audiences, but the majority will like it.