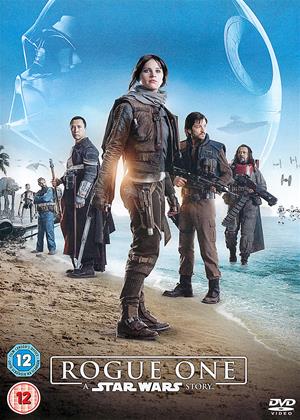 Rent other films like Rogue One: A Star Wars Story

Reviews (5) of Rogue One: A Star Wars Story

Guess what – it’s the same old childish Star Wars drivel. Who’d have thought? The once-promising George Lucas writes the clichés and the never-promising Gareth Edwards provides the disjointed direction. The same old message is that rebels are good and imperialists are bad. There’s little more plot and none of the characters matter. Felicity Jones is anonymous as the heroine. Donnie Yen appears for Far East marketing. All dialogue is expository.

There are intermittent cgi explosions and the climax is the usual cgi space battle. Ho hum. The overbearing martial orchestral score, underscoring every beat like a cartoon, is horrendous. One wishes its mockery was intentional. A subtitle says ‘Thrilling music playing’. Er, no.

Well done if you make it through to the end.

3 out of 12 members found this review helpful.

Great whoosh-bangs but nothing else. - Rogue One: A Star Wars Story review by RD

Let's start with the positive bits.

Great effects, wonderful cinematography with some beautiful shots and as ever the attention to detail everywhere is superb. The sound track is well done with clear and impressive surround detail and good explosions. Like many modern films some of the dialogue is muttered under the breath and undecipherable, however as none of the dialogue is very meaningful or interesting this is not a drawback for this film!

Now for the bad bits.

It's the same old film done with different explosions and slightly different scenery. The plot is to steal the plans for the Deathstar. That's the complete film described in one sentence, and there is no intricacy or storyline as such to pad it out or involve the viewer, just great whoosh-bang shoot 'em up scenes to keep you awake and take the place of anything interesting.

The conclusion must be that with so many cgi animators and digital artists (just look at the credits!) working flat out on the film they forgot to add the old fashioned bits like meaningful dialogue or character interaction, or even a working story, and stitched together the sequence of battles, attacks and effects into the style of a Star Wars film.

Play it loud to keep you awake and it will be great fun for most of the time.

I doubt anyone who has ever seen previous Star Wars films will enjoy one moment of this film…. zero storyline and amateur special effects. Plus a computer generated Peter Cushing.... why?? Where does it fit in the Star Wars storyline? lmpossible to tell other than the presence of the Death Star. It relies heavily on snatches of the old Star Wars theme music and musical score to make it feel like a Star Wars film....but when Darth Vader appears he has no “presence” despite the music.

Not a film to watch.... I couldn't finish it and would rather do some ironing...or even better read a good book. Don't bother.... life is precious and you'll never get that time back!!

A bit boring - Rogue One: A Star Wars Story review by RC

First off, I am not a massive star wars fan but have watched the other films and thought they were enjoyable. This appears to be a standalone film and the whole plot is to steal the plans to destroy the death star. I found this film lacking depth & it just seemed to go on and on. At one point I starting looking at stuff on my phone instead. It just wasn't great really.

The 'Force' is not even in the same gaalaxy as this garbage - Rogue One: A Star Wars Story review by PLUTO

i know george Lucas is weird, but revamping an entire episode with a nonexistent plot shows only his inordinate greed. a CG Prter Cushing looking as if he'd jus arisen from his grave to do a curtain call and being far creepier than he ever achioeved in life plus a villain dressed in white!!

15 minutes in I couldn't bear any more of it and stopped it. Face it Lucas . Some thing are better left dead... this is top of the list. oh and the Last Jedi was more dire by an astronomical factor. Stick to making original movies instead of preaching your insane religion Who knos yu may even have enough ledt for one more goodie.

Rogue One: A Star Wars Story (aka Rogue One) review by Mark McPherson - Cinema Paradiso

When one mentions Star Wars, they usually think of sci-fi adventure in which dashing heroes fight against classic villains with classic story themes. Rogue One is not that Star Wars. This is that special one-shot comic book spin-off that nobody asked for, but is oh-so-fun to read for being so radically different in the Star Wars universe. And here it is adapted for the big screen, showcasing a Star Wars movie that fans could only dream of existing. Those expecting the usual Star Wars charm and pluckiness will be disappointed with a film that plays as less of a sci-fi serial and more of a gritty war picture. Those that are willing to go with its more adult story will find a wickedly divergent Star Wars tale that is incredibly entertaining for being just that.

The movie makes itself clear from the beginning that this is not a normal Star Wars story. No booming John Williams score, no zooming out Star Wars logo and no expository text crawl. The filmmakers assume that you’ll be aware enough of this picture taking place before the events of Star Wars: A New Hope. The Death Star is nearing its completion and the Rebel Alliance has no clue what it is or what it will do. Their only lead is with the criminal Jyn (Felicity Jones) whose father has been working on developing weapons for the Empire. She hasn’t seen him since she was a child, but it’s a better lead than nothing. The Rebels offer her the usual deal when dealing with criminals: Complete the mission of finding plans for a Death Star and all charges are dropped.

Jyn isn’t alone, however, as she gains several allies during her operation. A scoundrel spy Cassian (Diego Luna) and his smart-mouthed droid companion K-2SO (voiced by Alan Tudyk) give her passage from planet to planet. But if you think these are the familiar archetypes of Hal Solo and C3PO, you’re mistaken. Cassian is not only the type of outlaw that will shoot first, he’ll shoot even when it’s not necessary. And while K-2SO might be all about numbers and percentages of survival, he’s more than capable of handling a blaster and dispatching Stormtroopers. I write this not as some challenge of who would win, as some hardcores fans will most likely debate, but to establish what makes this picture’s crop of characters a different breed. Additional allies include a martial-arts spiritualist of the Force (Donnie Yen), his gun-toting partner (Jiang Wen) and a defecting Imperial pilot (Riz Ahmed) fill out the dirty half-dozen.

For first two acts, Rogue One is strictly about the mission with much planet hopping and sneaking around Imperial areas. Jyn comes in contact with old allies (Forest Whitaker) and eventually confronts her father (Mads Mikkelsen). From the many planets we visit, the plot reveals a little more of the Star Wars universe, but never haps too long on its atmosphere. There’s no time to stop and smell the intergalactic mead of the catinas when there’s a grave threat literally looming overhead. The Death Star project is being helmed by Director Krennic (Ben Mendelsohn), a military leader resorting to smarmy tactics to hold the little amount of power he has left in his role. Dealing with an impatient Darth Vader and the vulturous Grand Moff Tarkin (who would eventually helm the Death Star in A New Hope) has made Krennic a desperate villain willing to do whatever it takes to stamp out the Rebel spies. He’s no Darth Vader, but, man, is he a great villain to watch.

But then the third act occurs and, wow, does it not disappoint. Being a prequel, of course, we know that those Death Star plans will eventually make it to the Rebels. Thankfully, Rogue One ratchets the tension and the stakes so high that the prospect of retrieving the plans is less important than if anyone will survive. The battle on land is massive with AT-AT walkers and hordes of Stormtroopers firing lasers and throwing grenades at the advancing Rebel troops. The battle in space is one of the most pulse-pounding in all of Star Wars as fleets of ships combat one another, slamming into one another and exploding into giant balls of fire. Multi-strand battles are usually expected within Star Wars pictures, but never with such grit and intensity.

Rogue One may be the most dower of any Star Wars picture for its darker tone and probably one of the most somber endings in the series, but it’s also immensely thrilling and engaging for just that reason. It opens up the possibility that maybe Star Wars doesn’t just have to be a space opera. As a war movie, Rogue One presents a more sophisticated side of Star Wars that feels fresh, inspiring and fearless of trying something new. The follow up title of A New Hope couldn’t be a more fitting. A little hope is necessary after such an experience that left me questioning if I actually saw a Star Wars movie this good.