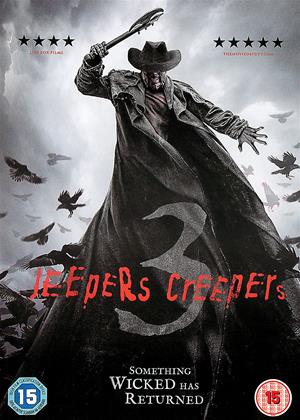 Jeepers Creepers 3 is actually Jeepers Creepers 1.5 , the story follows straight on from the end of part 1 and ends entering the realm of Part 2, but with NO real Continuity.

Mostly about the Discovery of the Creepers Truck that was used in Part 1 but never seen in Part 2 . The Truck itself Kills and is Dangerous,and possibly Cursed .

Everyone is as Stupid as they usually are in Horror Movies ,Doing all the things they Should Know NOT to do but DO Anyway .Yawwwn.

Most Frightening thing in the Whole Movie is the Sheriffs Terrible Hair Transplant, and that's not even in the Script,that is just the Actors Own Hair !

like it but missing something - Jeepers Creepers 3 review by gazmb

I liked it but still not a patch on the first film. They just don't seem to get how too make a good creepy horror film anymore . Not sure why everyone has to be so thick in a horror film either.

Like another reviewer mention it feels like this is inbetween the first film and second film. I found the ending disappointing as well. Waited so long for this film and they didn't make it good enough .

Back in 2001, the original ‘Jeepers Creepers’ presented us with a kind of slasher film, but with enough eccentric twists that ensured it provided something different. Two years later, the sequel undid all the good that was done and gave us a generic runaround peopled with stock characters. It has taken 14 years for this third instalment to appear (set between 1 and 2), and sadly the results are unremarkable.

A selection of characters are introduced, the less tolerable of which thankfully emerge simply as ciphers. Other than that group of brattish teen motorcyclists, we have two grizzled old cops: the bejewelled Sheriff Dan Tashtego (Stan Shaw) and Sgt. Davis Tubbs (Brandon Smith); farmer granny Gaylen Brandon (Meg Foster) and her casually stunning grand-daughter Addison (Gabrielle Haugh). Addison’s suitor is naturally called Buddy (Chester Rushing), and he is last seen departing for a basketball game in the van that was attacked in Jeepers Creepers 2.

The first time we see the Creeper here, he is as we remember him. This time, he is posturing on top of the roof of his van as it slowly drives away into woodlands. You dearly want a low-hung branch to nobble him. His powers have reached a new level, leading to some improbable/ridiculous over-the-top deaths (the double impaling of two of the motor-cycle gang springs to mind). The Creeper somehow lacks the spectacle he did in the first film. Perhaps it is unfair of me to hope for more, but when he spends so much time despatching the motor-cyclists to prove how nasty he is, it’s hard to be particularly impressed.

His truck is the star of the show here. It’s equipped with a CGI-enhanced box of death-dealing tricks Batman himself would be envious of. Instead of making the audience wince, however, the plethora of spikes and lasso mechanisms produce groans.

We don’t really have time to get to know anyone, each character is fairly generic. This is a real shame as again, the bickering, likeable brother and sister from the original helped make it so enjoyable, because they were real and their dialogue didn’t consist solely of ‘goddam’ and ‘son of a bitch’ (these are the words that even usher out the film). Events don’t flow particularly well, instead they seem cobbled together as if from separate productions. As the running time rolls on, this becomes particularly evident as tone skips from one thing to another with sinking, increasingly dull rapidity. Goodwill on behalf of the audience soon gives way to bafflement and the dawning realisation that this really isn’t very good. Director, writer and co-producer Victor Salva must take the blame for much of this – TV movie production standards and most of it occurring during bright sunshine. No real sense of atmosphere, no convincing jeopardy, nothing.

Gina Phillips, Trish from the first film, is mentioned at the beginning of this, but doesn’t turn up until the very end here.

It's already been mentioned in previous reviews of where this film stands as a sequel i.e 1.5.

I must have terrible taste, as I actually enjoyed this film and not as a stand alone film, but a worthy sequel. I would rate this one as better than the 2nd installment.

Yes, there maybe some characters that we don't really get to know, but let's not forget The Creeper is coming towards the end of his 23rd day. It was also good to note that Jonathan Breck had reprised his role and you can tell he is used to this character, in a good way.

I liked the way that they had incorporated some new things that we have not seen before, obviously I can't mention.

I wouldn't say it was absolutely brilliant, but certainly worth a watch.

If he is that ancient and deadly, why did he learn to drive, when he has wings? - Jeepers Creepers 3 review by Colbart

Loved the detail of the truck mentioned but never shown. In film 1 the whine of a supercharger could clearly be heard. (Shades of Mad Max??).

The storyline of the hand gripping anyone who touches it, showing who the 'Creeper' really is. All they said he is ancient and deadly. Who he really is. Why didn't we get to see??.

CGI, bullet proof van...even against the biggest of ammo...and really loved the roller bombs Left puzzled where did those long sharp 'spears' over the rear door come from. (especially the roof/floor ;-) .

Slightly drawn away from the original film concept, seems to be based out of the back of the van, not in creepy basements, some originality lost. Hints of a 4th film at the end...