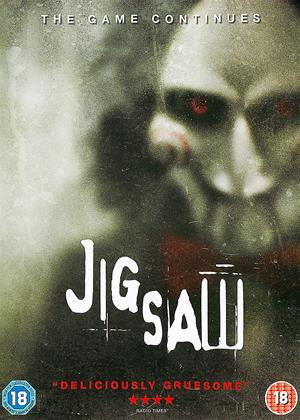 One for the Saw fans - Jigsaw review by TB

If you’re a fan of the Saw franchise then this hits the mark with all the usual twists, sub plots and renowned gruesome games. As per the previous films, you’re left trying to guess who in instigator is and as in the previous films it always unfolds in a clever and consice fashion. It’s sits nicely alongside the rest, without being spectacular. Reason being, that the story and the games have been played too many times now. Let’s hope this is the final part of the jigsaw now!

Pretty Average entry in the Jigsaw story. Thankfully a lot less Frantic than the last 2 which got on my nerves a bit,The main character of the previous few being deeply uninteresting or believable, but this one is enjoyable. if not all a bit obvious, as the same story twist has been used soo many times through the Jigsaw series. so often it isnt really a Twist anymore ,its just what you come to expect.

Loved it.......didn't see that ending coming!! Worthy of the excellent Saw series, strong performances and plot, couldn't fault it.......hope they make some more on the back of this as it's a series that deserves to run on further

The idea behind Jigsaw is as ludicrous as ever: how is there a Jigsaw killer operating when Jigsaw is long dead? Is it a copycat? Or has Jigsaw somehow survived?

For those who sat through all of the previous movies, I have good news: the quality dip of the final few Saw movies has been jettisoned in favour of a well directed, slightly more expensive looking (if utterly barmy) effort. The acting is largely above average, the effects are suitably gruesome and nasty, and the traps are inventive.

There is also a decently paced sense that's there's an urgent puzzle to be solved; something parts 4 and 5 were sorely missing with their bored ennui and feeling of 'get to the next death'.

The cast are enjoyable to watch as well. The cops get some good dialogue and fun interrogations, and the mortuary staff enliven events with snappy interplay (although one of them seems to be pretty makeup heavy for a morgue - a hazard of this kind of movie).

The plot is rarely sensible, and often absurd, but manages to suspend disbelief just long enough to sweep you along. It's only in the brief pauses that your brain kicks in to start saying "Hang on a minute, that makes no se-" before another chain starts clanking or a buzz-saw starts up.

The final twist was particularly enjoyable, and although it didn't help make the plot any more believable it did add the sense that they'd made more effort than usual. However, much as this might have temporarily revived the franchise, I think it's time to put the saw back in the garage and move on.

I really enjoyed this latest Saw film. I wasn't expecting the ending like it was. If you enjoyed the others you will like this one as well

Buckets of gore, and a decent ending - Jigsaw review by TR

Worth putting up with the dodgy acting and the faux toughness of so-called cops and caricatures of forensic scientists, because the surprise ending is a belter.

All been done before ... - Jigsaw review by NP

I lost interest in the Saw franchise – for that is what it had become, rather than a story – a few sequels ago, after Jigsaw’s elaborate traps and contrived plans became ever more ludicrous, especially after the character had seemingly died. This is ‘Saw 8’; let’s make no mistake about that. Renaming the series after the title character gives a suggestion of starting again, or rebooting, but it doesn’t.

To be fair, we don’t have to wait long before the grimy police procedurals and the screaming victims begin once again to get to the bottom of the slick-talking antagonist’s latest CGI gore-anticipating gameplay. Then towards the end, vast swathes of plot exposition are dished out with moustache-twirling bravado. If you love it, here’s more of the same. If you’re looking for something new amid the hollering and perfect-teeth hysteria, you won’t find it here.

A different name it may be, but the contents are still designer-sweaty and loud. It’s all been done before, too often. My score is 3 out of 10.

Despite the change in title, Jigsaw is no reboot, remake, or reimagining of the Saw horror franchise. It’s certainly not a welcome return of a sequel either, in the same way that Rocky Balboa or Rocky returned after many years with a fresh take. No, Jigsaw merely spins its sharp and grinding gears once more to be little more than Saw 8. And with such a confounding plotting of this messy revenge saga of elaborate traps, the blade has gone dull.

It’s back to basics for the Saw series in a story that manages to be routine, twisty, and forgettable. A new group of people finds themselves trapped inside an old mill, awaking to discover they’re placed in more of the Jigsaw Killer’s deadly traps. These traps include being drug by a chain into spinning buzzsaws and having one’s leg twisted in wire to eventually slice off the limb. Of course, all traps can only be escaped if the prisoners admit to their sins and sacrifice something to survive. Through the warped mechanics of the buzzsaw game, you have to let the saw cut you once in order to be set free. You may have to cut off a limb to save someone else. But the traps lose their allure in their conception. How can the film feature such an elaborate twister of a motorcycle-themed trap where the trapped must reach through whirling blades but also a lazier one where two people are trapped in a corn silo with random sharp objects tossed down a vent at them? Jigsaw is getting sloppy in his old age.

Oh, but Jigsaw has been dead for four movies. Surprise, he’s not. But is it really a surprise? Even after his character’s demise, Tobin Bell has always been present in recordings he left behind and flashbacks that keep bringing him into the fold. Of course, he’d have to come back from the dead and the script, of course, chooses a dopey twist to explain away his death being faked. Should we expect anything less from the Saw saga at this point?

And then there’s the dreary detective angle, staged far too much like a procedural cop drama than it should be. Police amble about the office trying to piece together the Jigsaw Killer’s patterns. And, oh, surprise again, some of the officials are either corruptly working for or trying to duplicate the Jigsaw Killer. Again. What’s so attractive about this killer that everyone wants to steal his thunder? Are they jealous of his pathos? Do they want to figure out how an old man with cancer has the strength, knowledge, and resources to create such ridiculously genius traps?

Jigsaw tries far too hard to be surprising and twisty and yet still comes up short. The traps are not as creative, lacking the cleverness of punishing specific people for their sins. But the sins we’re talking about here are those of baby killing, sending people to their deaths, and falsely imprisoning people. How do you build tortures around that without turning the film far too dark? It’s not like Jigsaw is going to stoop to having the murdering mother fish a key out of her womb with a rusty coat hanger. But maybe it should if only to make me hate the film more for being deplorable than boring.

As I said, don’t be fooled by the title. This is Saw 8 and the most tiresome of the lot, still doing its usual farfetched plotting of juggling characters and plot twists to an absurd degree, with less bite than ever.