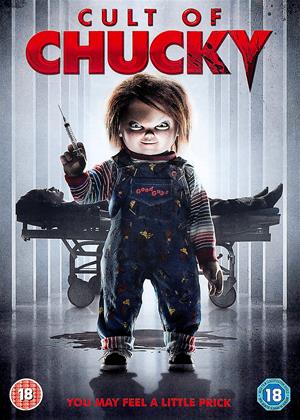 Reviews (3) of Cult of Chucky

Disappointing - Cult of Chucky review by IT

After the previous instalment, which was mostly a return to a more thrilling horror movie (although, for me, let down by a dumb ending that felt tagged-on), I had high hopes for Cult of Chucky.

I imaged the excitement that multiple Chuckies stalking their victims could bring. Surely, there would be some excellent, well-designed chase and action sequences. And how will the heroine/hero manage to stop the "cult"?

Instead, the movie is boring and very predictable. There are no chase sequences that I can recall - instead victims are usually helpless and can't fight back. And as to how the heroes overcome the threat? They don't. As in far, far too many horror movies of the last 10 years, the evil force triumphs. Haven't moviemakers yet come to realize that the idea of the killer winning isn't a surprise anymore? Or is it simply that so few people have the talent to write a really good script nowadays - it's easier to copy everyone else?

On the horror/kills angle (for the gore-fans out there), you won't see anything original in this movie. A falling glass sequence is probably the highlight as it's technically very well done. There is no real tension or threat ever, mainly because everything is so predictable. Stupidity is also king in this film... such as why is there a big, lethal drill available for use in a mental ward?

On the plus side, the lead actress is excellent as she was in the previous movie. And the interaction between the multiple Chuckies is a little funny (though it should have been hilarious).

Worst film of the series... despite a potentially awesome concept!

Entertaining entry into the Chucky universe . Nothing very New except here we have more than the one Chucky !

Some Old characters, from earlier episodes, reappear ,As usual no one believes a Doll is killing, so its much the same as every other Child's Play/Chucky movie . Odd choice of Ending though.

Oh dear, didn't like this at all, it's the same old stuff but not as good. I looked forward to this but it's very poor.