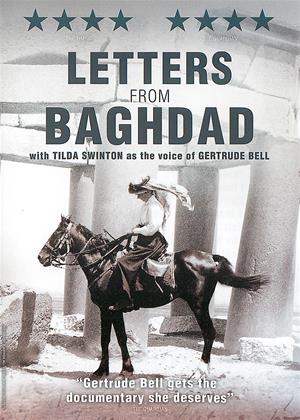 Reviews (3) of Letters from Baghdad

I hadn’t heard of Gertrude Bell. It seems as though her story is not often remembered today. She traveled alone to Mesopotamia, Saudi Arabia and what is now Iraq. She worked alongside Percy, Lawrence and many government officials. She explored much of the country on camels but also later traveled by car. She founded the Museum of Iraq. The documentary was painstakingly made using archival photos and film. All of the dialogue and interviews (with actors) are based on letters to and from her as well as her own journals. Seeing the lands and people in the early 1900’s is truly amazing. You travel along with her, wander through cities, float on small canal boats, see gatherings of tribes. Glimpses of rude behaviour by British towards the Iraqi people is very disheartening. I recommend this documentary as a history lesson as well as to see the past in the Middle East.

This short film makes skilled and exceptional use of archive footage to bring us as close as it is possible to get to the world explored by Gertrude Bell in the early years of the 20th Century. It is very much focussed upon her time in the Middle East - her pioneering exploits in European mountaineering are only mentioned but not otherwise covered - and upon the pivotal role that she played in the aftermath of the First World War. Her sad personal story is woven into the narrative with some sensitivity.

I highly recommend this film which made a splendid complement to reading her published diaries - do get hold of these if you can - and showed many of the places that she wrote about so ebulliently. For more about her visit the website of the Gertrude Bell Archive at Newcastle University.

Though I had heard the name of Gertrude Bell mentioned in relation to Britain’s infamous involvement in Middle Eastern affairs at the start of the last century & in the wake of the collapse of the dissolute Ottoman Empire it was often as a footnote to the accomplishments of one TE Lawrence in that arena. Lawrence of Arabia does of course feature in this but it is not to praise himself but to acknowledge the achievements of Miss Bell whose became so embroiled in the Iraqi, Persian & Arabic theatres that she was equally respected and feared across the political & religious divide & was instrumental in shaping this part of the world after 1918. The combination of Tilda Swinton’s voice with its ethereal dreamlike qualities reading letters that mingle frustration & triumph, love & life, along with amazing rate archive footage showing life in the likes of Tehran, Baghdad & elsewhere make for engrossing viewing.

Letters from Baghdad is directed by Sabine Krayenbühl and Zeva Oelbaum and tackles an incredible amount of information about the so-called “exotic” lands – or the Middle East to be precise – including today’s territories of Iraq, Iran, Turkey, and Syria as well. The period of interest depicted in the film is right from the end of the twentieth century until the end of World War I and beyond. Additionally, the story is beautifully, colorfully narrated by the very talented Tilda Swinton who gets the job of reading Gertrude Bell's letters addressed to her family back in England. It’s a love letter to anyone even slightly interested in history, the East, and the exotic nature of it all.

The film is an amalgamation of several important factors that define and justify what the Middle East was all about in the mind of the romantic soul: a beautiful desert pay-sage, slow-moving, disinterested camels, unusual and colorful bazaars, and Eastern people dressed in voluminous robes that protrude both their senses of style and re-define what fashion means. And if that wasn’t all, Letters from Baghdad is also obsessed with exotic dwellings, Islamic decorations, and magnificent ruins of old – all told through the grainy lens of old film footage which adds extra magnificence to the already deeply sun-drenched offering.

But, despite all of that, what’s Letters from Baghdad actually about? Granted, individuals without a deep understanding of the underlying history of Gertrude Bell's doings would probably find themselves lost and confused at times, and this is understandably so, since the film doesn’t slow down for the sake of pacing and gargantuan events unravel on the screen in a matter of seconds. Stripping all added drama, aesthetics, and improvisations, and we can safely deduce that Letters from Baghdad is a film about the imperialistic tendencies of certain states, the meddling of foreign powers in the identities of the first, and the supremacist powers that be in the overall Eastern culture.

Even taking the entirety of that aside, we can safely assert (again) that Letters from Baghdad is also a deeply personal story, one about the educated, charismatic, and highly influential British aristocrat Gertrude Bell, whose passion for the East drove her to accomplish some incredible things, and yet fail in others. She has worked with a dozen historical figures (Churchill, Percy Cox, T. E. Lawrence "of Arabia"), in order to establish King Feisal as the frontrunner of Iraqi rule. During the war, Britain vowed to only serve as an advisor to this government all in good will to overthrow the Ottoman rule at that time. During which, Gertrude experienced a deeply personal loss (as we find through the letters and snippets from the diaries) which seemed as if didn’t affected her at all, whereas in fact it left a long-lasting scar on her personal demeanor.

All things considered, Letters from Baghdad is a competently made film and a love letter to all things exotic in nature.