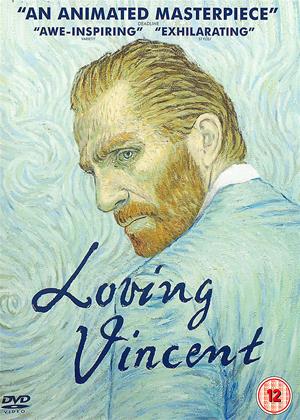 What a brilliant concept, to show an interpretation of the ending to Van Goughs life, in animated form, useing 1000’s of oil paintings ( by hand) based on Vincent’s actual paintings.

It is a fascinating story and I recommend it to anyone who is interested in art and the wonders of animation.

What a fantastic work of art this is. To be honest I could sit here and marvel at the way the makers of this film managed to create such a beautiful piece (and it does indeed deserve marvelling), but instead I will just say how much this film moved me in ways I never imagined it would.

Telling the story of the last few days of Vincent Van Gogh's life and what led him to his apparent suicide, this film has important messages on subjects such as mental health and the perils of posthumous notoriety. That the makers of this film managed to do this whilst also presenting every scene in a breath taking oil painting like fashion is what really stands this away from the competition.

I can't really recommend this film highly enough. A true artistic testament to a true genius of a man.

The film is an artistic and technical tour de force. Magically, it immerses the viewer into the swirly world of Van Gogh's paintings. The narrative is episodic and impressionistic, but humane and compassionate.

This is a brilliant, wonderful film that should have won the Oscar for best animation - Loving Vincent review by PV

This film is just wonderful. Not only for its astonishing artistry (all hand-painted) but also for its story - it revealed things about Van Gogh death that I didn't know.

It really was robbed of best animation Oscar - for the reason that from this year those voting in that category are not just from the animation world but from the whole film industry - and of course Coco won because it's Americans and about a Hispanic boy. C'est la vie, as Vincent probably didn't say...

It took a while to get used to the different accents in this film - no-one does a Dutch accent, they're all British English but from all parts of the British Aisles, so Van Gogh's postman speaks with an Irish accent! But after a while, when I'd got used to it, this worked fine.

Personally I would have preferred the Don McClain version of Vincent (Starry, starry night) as the soundtrack song at the end, not Maria Carey's version, but that criticism is tiny!

This is a brilliant and classic film. Just superb. So who cares it didn't get the Oscar eh?

What a beautiful tribute to one of the greatest artists to have ever lived. This brought alive the characters he painted and the countryside where he lived and travelled in the most skilful, visually striking way. It was a homage to the great man's genius and told the story of his final year in an original and sensitive way. It gets across the melancholy effortlessly using Vincent's own art style - it is so effective I found myself completely drawn in and absorbing the sadness and at times joy like they were being painted around me. I'm no stranger to the story of Vincent Van Gogh and the struggles he faced - how he put his soul on the canvas like no other before or since - and this piece of work did justice to all in the most captive of ways. I can't recommend this enough.

Took a little while for the film to work it's magic on me, but became totally immersed in the world it depicted. A unique experience, and so well accomplished and performed, particularly by Eleanor Tomlinson as the barmaid.

fabulous from start to finish - Loving Vincent review by OP

An absolutely wonderful film. Beautifully depicted and such an incredible and innovative way to tell the story. I also found myself being drawn into the film, which is absolutely mesmerising.

This is a very successful project and wonderful testament to the life of the genius Van Gogh. The narrative is the mystery concerning the death of this great artist and aptly told through the visual medium of his artistic style. The portraits come to life and become acting characters inhabiting the other paintings in continuous animation. A very special experience indeed.

I never thought the artist's style, which could be garish to my eye, could be so attractive and 'real'. I was totally absorbed by its beauty. The story is retrospective, we meet the characters that knew him and have a different perspective on his demise. A mystery develops (not a new theme) which I found to be completely fascinating.

A wonderful way to spend 90 minutes! Much recommended for those that like a gentle emotional movie. No crash bang wallop stuff, just intelligence and an emotional nudge.

We found this a very interesting concept of combining animation with real actors. We also loved the story and the way it was told.

Undoubtedly an amazing film to watch in terms of style. It looks stunning, being based on van Goghs painting styles and his works. It's such a shame that there wasn't more time spent on the story or script as nothing much happens at all and the script is extremely light. Ultimately once you are over the shock of the animation style and settle into the film, it becomes rather boring, with no big set pieces, reveals, cliff-hangers or thought provoking moments. As a study of art and an animation style, it is a triumph however as a piece of entertainment, it was actually a little disappointing.

There’s huge ambition within the very concept of Loving Vincent. Perhaps more ambition than any other animated film of the 21st century. For telling the story of Vincent van Gogh’s death, directors Dorota Kobiela and Hugh Welchman wanted to tell it with oil paintings, where every single frame of the film would be painted on a canvas with the medium. It’s an original and thoughtful approach, unlike anything I’ve ever seen before. But I regret to say I appreciate the film more for the experiment than the film itself.

In truth, I can see traces of other animated films with the use of conceiving the motion through rotoscoped footage. You’ve most likely seen this style of tracing over live-action footage for Richard Linklater’s animated films of Waking Life and A Scanner Darkly. To the films credit, there’s an astonishing amount of details in these thousands upon thousands of oil paintings, going so far as photorealism in both its depiction of van Gogh’s classic paintings and matching the actors recorded for their roles. It’s so detailed at times that I questioned the lack of the more painterly definements in several scenes.

The story is told Citizen Kane style. Vincent (Robert Gulaczyk) has passed away and Armand Roulin (Douglas Booth) wants to know why. He speaks with everyone who knew Vincent, from the asylum-housing Dr. Paul Gachet (Jerome Flynn) and the proprietress Adeline Ravoux (Eleanor Tomlinson). He investigates everything around Auvers-sur-Oise, hearing stories of those who knew him best. The scenes of Roulin’s questioning and journey through the beautiful countryside are all depicted in gorgeous colors that use the oil painting medium well. The flashbacks of Vincent’s life, however, are painted in stark black and white.

And here is where the use of oil paintings become questionable. When in color, the film is a wonder to watch as van Gogh’s famous paintings come to life in gorgeous staging. I can only imagine how tough it was to shoot these scenes on film, but seeing them painted and animated adds a whole new level of wonder. But when in black and white, that painterly quality is lost and the more realistic details take over, to the point where I questioned what the point was in such staging. Don’t get me wrong; these scenes have their moments of challenge and beauty as well, as in one scene where Vincent looks at his reflection in rippling water.

I found it hard to watch the film as more than the gimmick itself. Because, let’s face it, the biggest selling point is the animation itself. The ambition is so amazing that when the film settles into its style and turns a little too easy and cathartic in its tribute to Vincent, I felt bad for not feeling something more for a film that was fueled by a passion for painting. Maybe I’m just not as engrossed by the works of van Gogh to truly appreciate a tireless work to take his craft and speed it up for an entire film.

The film is by no means a bore, presenting decent acting and staging that could make the film a competent drama without the animation angle. But only a decent story for such ground-breaking animation feels like an ill-suited pairing. My thanks to the painters who worked tirelessly on this effort and turned out something astonishingly gorgeous, even if it didn’t come in service of the best film.