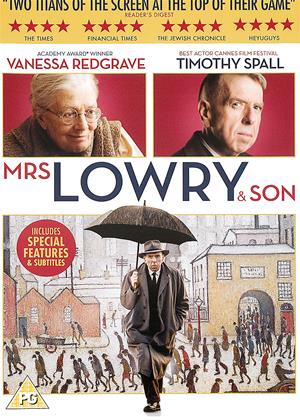 Synopsis:
The film paints the relationship between L.S. Lowry (Timothy Spall), one of Britain's most iconic artists, and his mother Elizabeth (Vanessa Redgrave), with whom he lived until her death. We see Lowry in the beginnings of his career, as he yearns for his work to be appreciated in London. However, his disdainful mother actively tries to dissuade her bachelor son from pursuing his artistic ambitions. At the same time, the film explores how Elizabeth is the very reason Lowry paints anything at all, as he desperately seeks to create something, anything, which will make her happy.
This powerful yet humorous story imagines the impact this obsessive mother and son relationship had on the great artist.
Actors:
Vanessa Redgrave, Timothy Spall, Stephen Lord, David Schaal, Wendy Morgan, Myles Keogh, Joanne Pearce, John Alan Roberts, Jon Furlong, Paul Bergquist, Laurence Mills, Kíla Lord Cassidy, Rose Noble, Jennifer Banks, Giselle Cullinane, Amanda Higson
Directors:
Adrian Noble
Producers:
Debbie Gray
Writers:
Martyn Hesford
Aka:
Mrs Lowry & Son
Studio:
Vertigo
Genres:
British Films, Drama, Special Interest
Countries:
UK

Narrow Window into the Life of LS Lowry - Mrs. Lowry and Son review by AA

Interesting film centring of the last years of Mrs Lowry's life and the hold she had over LS until her demise.  Hopefully how he blossomed after her death will be the subject of another film?

I love the paintings of LSLowery and this movie is very well acted. Timothy Spall is one of your favourite’s.

Sadly the movie only explores the close relationship of mother and son whereas I wold have loved to see how his career developed.

found this incredibly slow and monotonous. Though gathered that his Mother was a real bitch, how on other did he live with being under her thumb? It was much too slow for me to enjoy, wouldn't recommend it to anyone!

A bit slow but well acted - Mrs. Lowry and Son review by AL

Very well acted, but extremely slow. Would have been nice to have seen a little more of his art work, what gave him the inspiration and what happened when his career took off.

So glad to have seen this - Mrs. Lowry and Son review by CW

A couple of years ago I had the pleasure of visiting the Lowry Museum when I was in Manchester. Thrilling to see works spanning his career. Like the reviewer JD, I wish film would have continued to explore his life and painting after his difficult mother died. I would like to have scenes when his bedroom was opened revealing his passion for and purchase of Pre Raphaelite paintings, especially Rossetti. Still, what we saw was really interesting, poignant and well done. Timothy Spall and Vanessa Redgrave nailed their roles. He suppressed so much of his life to care for and amuse her. This is a thoughtful loving movie. The extras in the Lowry Museum were also v good, where Spall studies a few selected paintings with the curator. This is an important movie of course for those who are familiar with Lowry’s work, but also for those who have not seen the paintings. It inspires one to visit the excellent museum too.

Timothy Spall and Vanessa Redgrave give an acting masterclass - every expression, every gesture is an expression of Lowry's love for his mother but also his pain and pent up frustration at her dismissal of his paintings. Redgrave as the bed bound Mrs Lowry balances her social climbing and sometimes cruel domination of her sensitive son with a portrayal of an intelligent and cultured woman whose every aspiration in life has been denied her by her social class and a bad marriage. Most of the film takes place in Mrs Lowry's bedroom in their grim Victorian terrace. but there is humour and beauty in the film's depiction of the landscapes and scenes of ordinary folk that we know from Lowry's paintings. Noble's direction and the musical score are both spot on and it all adds up to a first rate film.

With two superb central performances from Vanessa Redgrave and Timothy Spall this is a low key theatrical chamber piece that follows the complex relationship between the artist L.S. Lowry and his bedridden, cantankerous and neurotic mother. A rather sombre film which lends itself better to a TV viewing it is set in Manchester in 1934 before Lowry has been 'discovered' and paints only to please his mother who is constantly critical and at times downright nasty about his talent. The film is not without its humour and it is of interest in charting the troubled life of Lowry but its the performances that make it worth checking out.

Heartbreaking yet heartwarming affirmation of intensity of humans feelings.Story of claustrofobic relationships between mother and sun.Story of devotion to art and to mother.Being true with himself whatever he did.Man of extraordinary perception of seeing beauty in ugliness Showed us that ugliness is also part of life,through it we appreciate beauty even more.

Charming drama revolving around Lowry's relationship with his crochety old disabled mother. His career hasn't lifted off yet and she hardly encourages him so the film is really about his determination to pursue art as a career come what may. The obstacles are close and personal. The atmosphere claustrophobic. We know the outcome of his career but the tale behind is engaging and worth a watch. Liked it. Amazingly Maggie Smith didn't get the old lady role!

The acting from both Timothy Spall and Vanessa Redgrave is, as usual, 1st class, yes the film is a bit ponderous, but the story is fascinatiing.

Lowry spent much of his life caring for, and being put down by his mother, who in the film set in 1934, is an invalid full of self pity for the life she was denied by a poor marriage.

Lowry dotes on her every whim, trying to make her happy, she in turn does'nt have a good word to say for him and despises his "hobby" of painting, when he's not out rent collecting. I know that it took the public a while to actually realise what a true genius Lowry was and his paintings now sell for heaps of money. I enjoyed the film and have now actually watched it a second time, I hope someone makes a film about his life after his Mother died in 1939.

By no means is this Timothy Spall's finest piece of work. - Mrs. Lowry and Son review by DW

Apparently this Category 12 film is based on a BBC radio play: the transfer to film has failed miserably.

I've got sympathy for the reviewers who hoped for more of Lowry the artist: all they got was often-repeated images of Lowry the devoted but frustrated son. I can do without an interpretive sound track intended to help us know how we should feel about certain scenes: British film makers seem unable to dig their way out of the rut of perpetual mediocrity. Tiresome flashbacks, no thank you. The scenes of playfulness with groups of local children jarred a bit with me but I've now found out that the old boy did in fact have a humorous side to his personality.

Made on the cheap I would think so the financial backers didn't have to dig too deep. Even unlucky 12 year old viewers would have noticed that in one external scene the distant railway viaduct & passing steam train were both hastily made from cardboard!

One star is half a star too generous. I suggest Timothy Spall might want to leave this one off his CV.