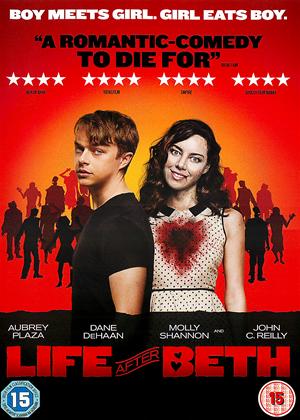 Reviews of Life After Beth

The romanticizing of horror figures continues with Life After Beth, a strange and overly quirky zombie romance with that indie hipster vibe. At its core, it is a movie about a teenager trying to break-up with his best girl in the midst of an impending zombie outbreak. Such a concept has plenty of potential to be a real zombie romcom that could easily upstage the previously established effort, Warm Bodies. It even takes some funny twists with the whole zombie mythology. Perhaps it takes too many twists as the comedy becomes so disconnected from the horror it gets rather irritating.

The title teen Beth (Aubrey Plaza) is given a funeral after her untimely death. Her boyfriend Kyle (Matthew Gray Gubler) mourns her loss and misses her deeply that he starts forming a relationship with her odd parents (John C. Reilly, Molly Shannon). But on one of his many visits, he spots Beth in the window of her parent’s house. Bursting in to find her, the parents inform Kyle that their little girl just ended up coming back resurrected for no reason. Kyle is quick to freak out and believe the parents are mad for keeping her living state a secret. But when they see how alive and happy Beth once was, none of them can bring themselves to tell anyone about it. They keep her mostly indoors and only allow outdoor trips at night. And, of course, the parents try to maintain Kyle’s relationship with their daughter to a very disturbing degree.

But their relationship may be the only thing tethering Beth to the human world as she slowly starts devolving into violent outbursts with deformed skin. The only thing that can quell the heart of the lady zombie from craving brains is getting into the mood with Kyle. What makes a zombie ready for love? In this universe, it’s smooth jazz. Who knew that the solution to a zombie epidemic lie in the soft sounds of saxophones and pianos. Sadly, there is no wonderfully absurd moment where all the zombies converge on a jazz club like moths to a flame. This would’ve been the perfect opportunity for turning Kenny G intto the hero of humanity.

More zombies start coming back from the dead, but not craving flesh right from the get-go. Many of them simply reappear as if they’d never left, ala The Returned. Kyle’s deceased grandpa has a chat with his folks like a normal old man while the rest of the family is freaking out, including Kyle’s gun-nut brother who can’t stop firing ineffective shots at the zombies. Things keep getting stranger as Kyle’s house is later visited by the previous tenants from another generation. But the most important thing on his mind is Beth. The thought of losing Kyle causes her to bust up the house and go out eating people in her angsty spite. The parents are still all for having their daughter, but treat her deadly rampage more as a teenage outburst.

While there are a few good laughs to be had, the entire film is mostly just one joke beating its head against the wall for 90 minutes. The whole obliviousness to the zombie invasion in favor of a romance grows old around the third act and the silly scenes slowly turn from laugh-worthy to smile-inducing at best. Perhaps if there was more build up of the romance to inspire more feelings in Kyle besides fear, the story with be much more relatable in its absurdity rather than just basking in the shock value. Why couldn't we see more of Kyle's relationship to a zombie? Why not try taking her to an outdoor festival where there are too many distractions that conflict with the zombie lifestyle? There is so much potential for this premise considering her slow generation into a flesh-eater that it feels almost wasted on a script that is mostly just quirky dialogue.

For as dragged out Life After Beth becomes, it still has its moments here and there of amusing quirks. The most memorable bit involves Beth, now fully a zombie, tied up to the oven. When Kyle decides to calm her down with a hike, she lifts the oven up like a burly backpack. The shot of them strolling around a mountain path with Beth hauling an oven and a stereo attached to her neck playing her smooth jazz did make me smile. I just wish the film had enough of a drive to explore more areas of this relationship rather than just going for a handful of comedic lines which grow rather tiresome. I can’t quite recommend Life After Beth for that reason, but it’s certainly a movie I admired for its concept and I wouldn’t mind seeing it on a rainy day for horror pictures and/or a date night.