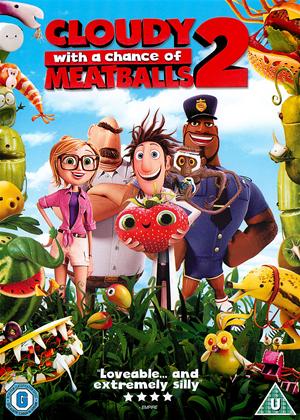 Rent other films like Cloudy with a Chance of Meatballs 2

Reviews (1) of Cloudy with a Chance of Meatballs 2

Cloudy with Meatballs was great fun and the sequel pretty much continues the high standard, although a third film probably would be stretching it. This has some great visual gags and feels like it went through the book of bad jokes before writing the script. Fun for kids but adults will also enjoy it.

Being unfamiliar with the first part of this series I can only speak to the quality of Cloudy with a Chance of Meatballs 2 as a solo effort and not a continuation of the series. That being said, Meatballs 2 is a delightful tale of self realization filled with the kind of humour designed to play to a young or old audience.

The film follows young inventor Flint Lockwood (Bill Hader) as he is forced to relocate following the events of the first film as the cleanup of his hometown begins. However, when something goes wrong he must return with his friends to try and fix the problem but an evil inventor (Will Forte) sets out to acquire Flint’s invention for himself, something that Flint must stop at all costs.

Written by a duo of writers (John Francis Daley and Jonathan M Goldstein), the film feels like the brainchild of someone equal parts child and old soul. Filled with plenty of puns and enough physical comedy to make even the most stoic of men laugh, Cloudy 2 proves a funny romp through food related jokes as the film serves up food visuals aplenty as Flint’s machine creates unique and exciting food creatures to populate this sequel.

Much more surreal than conventional animations, Cloudy finds comedy through odd character movements and strange worldly dynamics as the series explores the boundaries of animated filmmaking as characters wave their arms in unnatural ways. The films finale in fact, a showdown between Flint and rival inventor Chester V (Forte) is a master class in bizarre motion and comedic fighting as the two clumsy creators try to come out on top despite their obvious problems with motion and balance.

A little too long and overfilled with puns, Cloudy runs out of energy towards the end but still manages to prove itself a rollicking good time through every culinary creation you can imagine although the films overly sweet tale of trusting others may only play to a child audience as the adults may be too busy gagging.