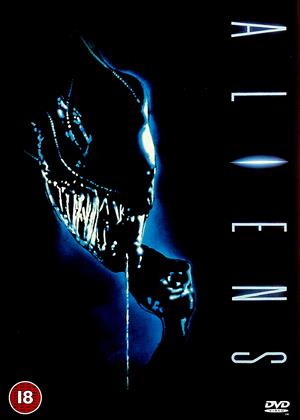 better than the first - Aliens review by CP Customer

When Alien made an unexpected impact in theatres a sequel was clearly predicted. Many critics thought Alien 2 would be a very bad idea but when the film was actually released they quickly changed their minds.

After destroying the alien that killed all of her crew Ellen Ripley, and her cat, begin making the journey back to earth. But the problem is that their craft has gone off course and Ripley has been floating around in space for 53 years! Luckily a team of astronauts find her and bring her to a huge centre where she receives many odd looks from people who do not believe her story about the alien she faced 53 years ago. But when the centre loses contact with a large group of colonists, living on the planet where Ripley's crew first discovered the alien life form, Ripley is forced to return to the planet along with a determind army of troops. Soon terror breaks loose as Ripley and the troops don't discover one alien but hundreds.

This film is completely action packed. James Cameron knows how to write an action movie and the storyline doesn't get stupid at all. There is no bad acting and although the special effects look a bit dodgy now they don't take away any of the experience. The relationship created between Ripley and Newt is also very clever and convincing!

One of the few 'sequels' that work - Aliens review by RP

The first film in the series 'Alien' is a superb 1970s sci-fi film, never bettered, and made the reputations of both Sigourney Weaver and director Ridley Scott. Seven years later along comes the sequel 'Aliens' and a different director, James Cameron. So, was it as good? Or – as most sequels, remakes etc seem doomed to be – a load of old tosh attempting to cash in on a lucrative franchise? Despite its reputation, the original 'Alien' is not a horror film – there is very little on-screen blood and gore with the sole exception of *that* scene. This second film is an action adventure sequel, plenty of running about, shooting, flamethrowers, and of course, nasty aliens. Great fun, highly recommended. 5/5 stars.

Alien was a very good film and not very often that the sequel is as good a film. Very good story and more action in this film.

The greatest of all Sci Fi films? - Aliens review by JD

Aliens is an epic win by Cameron. I could leave it at that.

Its a film that wreaks of his skill and attention to detail. God, that detail. Unlike 90% of Sci Fi's Cameron makes everything and everyone something real. The way the pulse rifle is explained, the auto turrets - even Paxmans excellent comic book style scene during the drop where he details the weapon systems.. It makes it all feel so real.

And talking comic book, the marines are comically over played and almost annoying but, but it brings them to life and you quickly want everyone of them to survive. And Check out there armour. Standerd Marine issue but custom decorated, another awesome detail.

And the Marines and the weapons are just 1 small part of this film, yet that alone puts Aliens amongst the very best action films of all time. Yes, this film can trade blows with the best of horror, sci fi and action independently its that good.

A lot is said about Aliens being relentless action. It isnt. It takes almost an hour to spin up and does have the odd break through the remaining 90 minutes.

I just put it down to how the film sucks you in, then once your in its pummels you senseless. One pro writer explained it well, saying he didnt know how to rate the film as he came out dazed. He was entertained, he was exhausted.

And has any film left behind so many quotes re-used in daily life or so instantly recognizable?

Its an utter masterpeice of sci fi which only has one flaw. It set a bar with a carrot dangling from it that the film industry cant help trying to reach. Needless to say, nobody has even got close.

A fantastic, exciting and gutsy sequel to the 1979 science fiction classic and it cleverly takes the story in a completely different direction and sets itself as a combat film over a basic horror narrative. It also focuses on the central character of Ripley (Sigourney Weaver) giving her more complexity and depth. After drifting in space for 57 years Ripley, the sole survivor from the first film, is rescued but finds the 'company' deny any culpability in the deaths of her crew mates. She is forced to return to the planet where the derelict alien craft was located because communications with the new colonists there has stopped. Ripley accompanies a team of tough marines who have no idea what dangers the plant holds. Plenty of action, tension, scares and a gripping plot make this a film that is the equal of the original and arguably it's one of director James Camerons best films. Considering the franchise that followed this introduces the theme of motherhood into the main character but ultimately this is science fiction action cinema at its very best. It's a visual treat with a dreary, industrial vision of the future including vehicles and advanced weaponry. There's a brilliantly haunting score and a first rate cast including Michael Biehn and the late, great Bill Paxton. A top film that never fails to entertain, and one to most definitely see if you enjoyed the 1979 original. The version to check out is the 1991 'Special Edition' which replaced scenes removed from the theatrical release but which enhance the story and action.