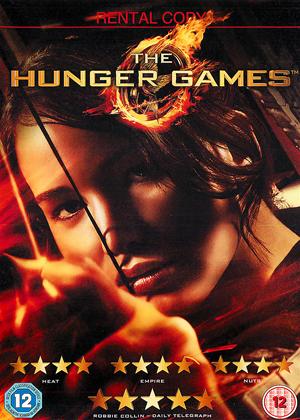 Reviews (2) of The Hunger Games

This is a pretty basic plot which draws much of its ideas from previous films. Think a teenage Rambo with a few extras.

The premise is shaky and the plot threatens to put you off in the first 5 minutes when the ridiculous hair comes into focus.

It's really the sort of "future" film that I thought they stopped making after Soylent Green.

If you're 12 you might enjoy it, anyone older than that will probably regard it as a bit of lightweight fun, although putting a bunch of teenagers into a jungle to kill each other doesn't sound like fun, it's done a very clinical and largely gore free way.

Took me half the film to remember I'd watched it before... - The Hunger Games review by BS

...it was that good. Considering Jennifer Lawrence is in it, and she was amazing in Winter's Bone, it had the emotional depth of one of Peppa Pig's muddy puddles. Really really don't bother. Watch World on a Wire instead.

Heralded by some as “the new Twilight” this movie adaptation of a hugely successful teen novel didn’t leave the audiences quite as enthralled as the makers hoped. Set in a future where Panem (once known as North America) is ruled by a sadistic government called the Capitol, a teenage girl and boy from each of the 12 districts to take part in a violent televised death match called “the Hunger Games”. Sixteen year old Katniss (Jennifer Lawrence) voltmeters to fight in the Games in the place of her younger sister, it is not until she arrives within the arena that she and her male counterpart Peeta (Josh Hutcherson) realise they are up against strong and keen Tributes from the other districts who have been training for this battle their entire lives.

With only her own resourcefulness, instincts and the training of a drunken ex-victor to rely on Kat must ensure that she makes it out of the arena alive.

A rather dark premise for a teenage sci-fi if you ask me, but fear not, the movie is absolutely dripping with all the required teen angst and melodrama that manage to bring it’s rather gruesome plot back from the edge of entertainment into wrist-cuttingly average territory.

Although on the surface The Hunger Games has rather a lot on offer, it’s action packed, the cast is really quite good and visually it’s absolutely stellar, but there is something about this movie that sticks in the throat that nagging feeling that not only do you know what’s going to happen but no matter how hard you try you just don’t care.

The survival story and rise of the underdog plot line are all narratives we are familiar with yet where some handle them well instead the Hunger Games presents a rather watered-down grittiness, though the night is dark and full of monsters it’s more of a dull grey than a sharp encroaching black and to tie it all together is a romanticised female heroine – ok so she’s no where near as bad as Kristen Stewart’s Bella but there are several occasions where you wouldn’t mind reaching through the screen and giving the girl a slap. In the end it’s actually a terrible shame because on plot alone this could be a truly remarkable dystopian sci-fi, but it’s spoilt not by it’s teenage characters but by the teenage audience it panders to. Had this been a movie for grown-ups, directed by a monarch of the genre, this movie could have been as ground breaking as Blade Runner was in 1982.