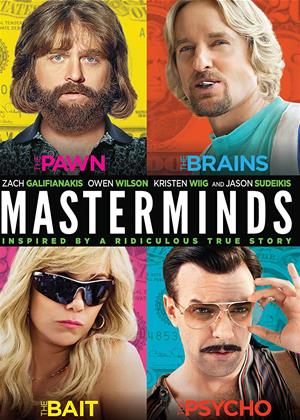 Synopsis:
In this action comedy based on true events, David Ghantt (Zach Galifianakis) discovers the true meaning of adventure. He is a simple man stuck in a monotonous life. Every day he drives an armored car, transporting millions with no escape in sight. The only bit of excitement is his crush Kelly Campbell (Kristen Wiig), who lures him into the scheme of a lifetime. Along with a group of half-brained criminals led by Steve Chambers (Owen Wilson) and a faulted heist plan, David manages the impossible and makes off with $17 million… only problem is he foolishly hands the money over to this group of double-crossers and is set up to take the fall.
With the bandits blowing millions on ridiculous luxuries, they leave behind a glaring trail of evidence. In over his head, David must dodge the authorities, evade a hit man, Mike McKinney (Jason Sudeikis), and turn the tables on the ones he trusted.
Actors:
Zach Galifianakis, Kristen Wiig, Owen Wilson, Ross Kimball, Jason Sudeikis, Devin Ratray, Mary Elizabeth Ellis, Kate McKinnon, Leslie Jones, Jonathan C. Daly, Ken Marino, Daniel Zacapa, Tom Werme, Njema Williams, Nils Cruz, Michael Fraguada, Christian Gonzalez, Candace Blanchard, Karsten Friske, Dallas Edwards
Directors:
Jared Hess
Writers:
Chris Bowman, Hubbel Palmer
Aka:
Loomis Fargo
Genres:
Action & Adventure, Comedy, Drama

A film such as Masterminds plays like a series of plugins to contort comedy out of a true crime story. Its story is based on a 1997 robbery in North Carolina that was one of the largest vault heists by dollar amount. The robbery was carried out by a number of individuals inside and with an amateur nature considering the final result. That sounds like a recipe for a bland and easy comedy and, what do you know, it turns out to be just that when all the elements are plugged in for the film.

Naturally, you hire funny actors to bring the laughs. Zach Galifianakis is a solid choice of portraying the southerner David Scott Ghantt as a goofy southerner with a thick accent and dopey behavior in his bearded innocence. I started having flashbacks of this role in the comedy pilot Horse Apples where he played an exaggerated redneck and how similar he sounds in a role meant to be a tad more earnest. He works for a security company as an armored car driver alongside his partner Kelly Campbell, played by a sweetly silly Kristen Wiig. A romance would bloom if not for David’s marriage Jandice, played by a weirdly manic-faced Kate McKinnon masking insanity behind a smile both hilarious and creepy.

Kelly is fed up with working and concocts a scheme to get rich quick with the help of David. After hearing the recent news of a security guard led heist in Jacksonville, the two figure they’re just as capable of such a stunt. And so they steal the cash they protect and more silly players become involved. Owen Wilson plays Steve, the true genius behind all of this, casually taking credit and making off with Kelly after giving a convincing explanation in classic Wilson words. Jason Sudeikis plays a hired hitman that seems to enjoy using knives more than guns but also functions by Batman v Superman logic where mere trigger words could halt his assault. And there’s an eager FBI agent after all of them, played by Leslie Jones with surprising restraint.

As if it needed to be stated from the cast list, the film takes a more comedic route for portraying the heist than loading it with any sense of gravity. Every scene is treated for a laugh, sometimes with going for the extra layer of improv as in a scene where David and Jandice pose for wedding photos. Not only does this goofy bit have all the hallmarks of McKinnon winging it with her trademark silliness, but the post-credits feel the need to include all her takes as well. This would make it seem like the humor had a natural flow to the story but it still all comes from design. We know that the likes of Galifianakis, Wiig, and McKinnon can do funny with little. And, boy, do they have to work overtime here for laughs.

As with a lot of lesser true crime stories, Masterminds draws from a heist that is interesting more for the result than the journey. The stealing of the money from an armored car service was impressive mostly for the money stolen. Not so much the robbers themselves who are all copycats of previous crimes. And so there’s a lot of blank space for the comedic actors to strut their humorous talents and make lemonade out of nothing. What they make is water; nothing all that quenching but consider the ingredients they had to work with.