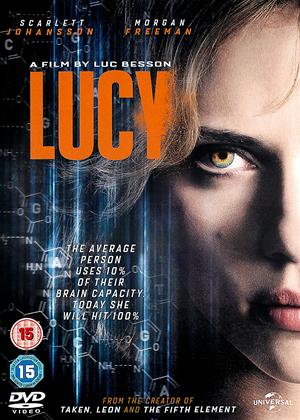 I really enjoyed this film. Sure, it's full of pseudo-philosophical Frenchie twaddle (you really can tell this film is part-French just from that!); sure, it's heavily influenced by The Matrix and other Hollywood nonsense; and sure, it's full of set-piece chases and martial arts and car chase stuff, to appeal to the Chinese market (that is what has ruined the James Bond movies, which used to be fun and funny).

But I enjoyed this way more than the last James Bond film.

The special effects are wonderful. The film is trim and efficient, coming it at less than 90 minutes, and moves along at a cracking right-rollicking rate.

The acting is great, esp Scarlet J, who played another sci-fi role in 'Under the Skin'. Her character arc here is so utterly massive, but you believe the transformation, due to the magic of sci-fi and a Bond-like drug-dealer plot line.

This really is a cracking thriller, spoilt by some silly wildlife shots at the start and by over-intellectualising Frenchie philosophical waffle at the end.

I suspected it might connect with Lucy, the skeleton of the oldest human found in Africa, and it does, esp in a weird, perhaps unintentionally comic, time travel sequence.

I found this a very enjoyable film, strong cast, well acted and well paced. The thought the plot became increasingly far fetched, but this didn't spoil my enjoyment. Scarlet J and Morgan freeman always worth a watch and don't disappoint.

I am usually not a fan of this type of movie, but Scarlett J was brilliant, good plot but maybe over violent. Good special effects and action sequences. At 87 mins it does not outstay its welcome

I thought this was brilliant, exciting, oh i'm no good at this, but I gave it 5 stars. Because it's been so underrated?? I think so.

Watch any film but Lucy - Lucy review by MT

Utter, utter garbage. Non-sensical mess from the off. Great actors destroying their careers by being associated with it. A ludicrous blend of Limitless and The Matrix, unbelievable that this got off of the starting blocks. Rarely do I want a film to end so much, I stayed the course hoping it would redeem itself...no such luck.

One of the stupidest movies I've ever seen. - Lucy review by AG

Words fail me. They also failed the writer of this nonsense. How anyone could have read the script and not used it for loo roll is beyond me.

No thrilling "Taxi" car chases this time but lots of triad gun fights. A pity that Luc Besson was infected with Tony Buzan's nonsense "We only use 10% of our brain". Since several decades after he said this, we still have little idea how the brain works, it has become obviously a ridiculous claim to make. Still if we forgive Luc for this as it was not his mistake and go with the hypothesis, the film is entertaining enough, especially with Scarlett Johansson, and Morgan Freeman to help it along. Luc Besson plays a cameo (uncredited) role as a doctor. The morale behind the film is vaild even if the argument is twadlle.

Only writing more words as has to be a least a 100 words hopefully this is enough to put what i wish to say about this film.

watchable if a bit unbelievable - Lucy review by jaysha

This was a passable film if a bit far fetched. The action scenes were good and morgan freeman always brilliant. Love that voice.

Scarlett Johansson is no longer an unknown name. She has risen to fame with her most notable role arguably as Black Widow in the Marvel series, and is the lead in the new science-fiction action film Lucy. It is clearly not the most scientifically accurate, but is an excellent choice for a purely entertaining film.

Lucy begins with the title character far short of what the trailer revealed her to be. She is not a genius and she does not have ‘special powers’. Instead, she is partying in a Taiwanese night-club, drinking and dancing with no abandon. Her life suddenly turns upside-down when she is kidnapped by an armed gang, and forced to work as a mule, transporting a package of drugs inside of her body. When the deal goes wrong, an attack causes the package to fracture, and the drugs flow into Lucy’s system. Lucy transforms into a warrior with an expanding mental capability (telekinesis, telepathy, superhuman strength, etc.) that rivals anything seen before.

The film is written and directed by Luc Beeson, who has a grand history with this genre. He is probably best known for his work on The Fifth Element (1997), the Transporter franchise (2002 to 2008), and the Taken series (2008 to 2014). He clearly has a firm grip on the genre, and he manages a tight balance between exposition, dialogue, and action.

There is always the annoying distinction between ‘actors’ and ‘sci-fi actors’. There is clearly nothing different about them, but, for some reason, actors are always lumped into one group or the other. Scarlett Johansson has been in many assorted films since she began in 1994, but it has only been in recent years that her popularity has skyrocketed. This is, in large part, due to her role as Black Widow in the Marvel series. She has proved to be more than a sci-fi actress. Morgan Freeman, too, is always an excellent actor who brings credibility to whatever role he plays, and is a wonderful compliment to Scarlett Johansson.

The fight scenes and car chases were believable, and it is cool to see how the film industry has accepted female leads. The rise of heroines instead of damsels in distress is refreshing, and Scarlett Johansson has been at the forefront of this movement.

The only negative thing about this film, would be the lack of scientific realism. It was in an interview that Luc Beeson described the beginning process of Lucy, and how it took ten years to become a reality once he heard about a scientific theory that humans only use ten percent of their brain. It is true that it is a good premise for a science-fiction film, but this theory has been widely debunked, now openly referred to as a myth.

Reviews from critics and audiences have been mixed, with both sides arguing the same above points.

Overall, this film is not very scientifically accurate (even in theory), but it is an entertaining sci-fi action film.