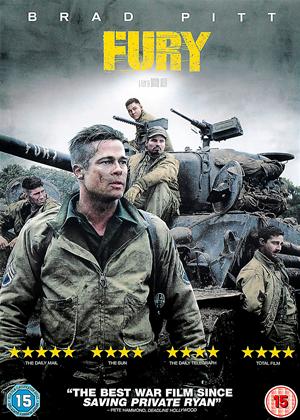 I find it deeply depressing that many Americans will watch this movie and consider it fact - that 5 US soldiers in a tank defeat 300 Germans. Even worse that the AWFUL Inglorious Bs. Dumb CGI effects and non-history. Really REALLY stupid film on ALL levels.

I cannot believe people mentioned Brad Pitt's name in connection with the Oscars for this utter drivel.

Fury Review - Fury review by AM

Fury is an interesting gritty film in a world where Hollywood ‘superhero’ violence has become glamourized into computer game fun. By contrast writer and director David Ayer reminds his audience of the horrors of war.

The violence here is like war, dirty, gruesome, surprising and claustrophobic. You don’t know where that final shoot will come from and if it’s going to be your last minute on this earth. If you still have doubts war is glamorous Ayer then shows how a group of men live in the confines of their Sherman tank and the nature of war as Fury’s new recruit first job is to wash blood soaked seat of the previous occupier.

It is not a film without passion as we follow out tank crew and our new recruit to see how war gradually turns these men into passionless killing machines.

The film is not without fault as at times it can chug along like a Sherman Tank however these small slowdowns are made up for in the wonderful battle sequences. The film is certainly a good reminder that war is inhuman in nature.

I enjoyed this film , based around a group of Americans in a tank fighting the germans across the country. Some good gritty tank battles and army fighting sequences.

Whether or not it is a reasonable reflection of what it is like to be in a tank in WW II I am unsure, it is certainly believable, the bonus section featured veterans who had advised the actors. As an insight into the hardship and psychological forces inside a tank it is a masterpiece. As a drama it is thrilling. As a US beats the rest of the world war film it is irritatingly patriotic and pointless.

A typical pumped up American take on the War! - Fury review by CS

I'm not really a fan of Brad Pits apparent versions of War and how the Yanks won the war for the world (sic), please! For me this film simply shows that both sides can be as bad as each other and I didn't see Brad's team as heroes at all, merely glorified killers on a murder spree! It seems hard for Americans to make a film about the Second War without their egos getting in the way, there is nothing glorious about War at all, yet somehow, the Yanks seem to glory in falsely showing the Germans as the bad guy, when in fact the average German soldier was just as afraid and reluctant to take part as we were!

Writer and director David Ayer wastes no time displaying the horrors of war in Fury. The movie opens with a fiery aftermath of a gruesome battle. Rubble, corpses and machinery from tanks litters the area. A lone Nazi soldier walks the grounds until he is eventually slain by the only remaining allied tank unit. The crew of the tank soon pull out to rejoin the nearest squadron and live to fight another battle. They have been through a terrifying experience of witnessing death and it will not be their last.

After several battles across Europe during 1945, the Sherman tank unit led by their sergeant nicknamed Wardaddy (Brad Pitt) restock before heading into another fight. With little resources and few men, the unit receives greenhorn Norman Ellison (Logan Lerman) as their latest addition. After having been bred by the horrors of wars, the unit wastes no time breaking him in. After an ambush where another allied tank suffers a loss, the crew makes Norman watch the burning soldier to remind him of the cost for not doing your job. A captured Nazi soldier is held down and Wardaddy forces Norman to shoot the enemy to cruelly instill the kill or be killed mentality of war. He is then forced to witness brutal slaughter after slaughter in between intense tank battles.

Ayer sets the tone of a dark and grisly WWII with all the elements you’d expect from an exceptional war film. The allied characters we follow throughout are brutally damaged from the war where they see slaughtering Nazis as more of a job with little humanity. In a retaken town, allied forces usher out a building of children, but hold back a captured Nazi officer to shoot after the children are clear. In another tense moment, two soldiers attempt to befriend two local German women in their household which turns awkwardly dangerous when the other soldiers discover them. These scenes do a decent job displaying the horrors and the true costs of war, but most of these situations have been done before and were far more memorable in other movies.

What the film does offer us that is fresh are the amazingly gritty tank fights. In most war films, we only see tanks from the outside as faceless machines rolling over the opposition. In Fury, we’re placed directly in the cramped quarters. We see everything the crew sees from their limited vision to the loading of the ammo. The battles that the Sherman tank squads are involved with are tough enough with enemy soldiers firing at all sides, but it’s even more nail-biting when they actually match actions with an enemy tank. It’s a very complex and thrilling dance as both tanks attempt to maneuver and fire at just the right angle when so close to each other. One wrong move, one misfire, and it’s all over for either side.

Helping the film out is stellar cast that breathes life into what could’ve been a ho-hum batch of characters. Shia LaBeouf plays a Bible quoting crew member simply nicknamed Bible who fits the role perfectly, not once reminding me of the nervous teen from the Transformers movies. Michael Pena and Jon Bernthal also fill out the cast nicely as the more jokey members of the crew, but also far more hardened and battered by combat. And, of course, Brad Pitt provides a commanding presence as a sergeant who has fully grasped his role in the war being able to fluently speak German from his experience in Nazi killing. Seems like a tough act to follow given he was tongue-in-cheek with demanding Nazi scalps in Inglorious Basterds, but he pulls off the role well enough without harking back to the accent.

Fury may not be one of the most memorable war films ever made, but it’s still a solid addition to the genre. The biggest contribution of the film is that it doesn’t portray war as deeply heroic or political, focusing on a personal perspective from the risk-taking tank squadrons. The film nails home the point that even though these are the final days of the war, it would still mean that many more would have to die before it truly ended. This is an honestly brutal look at the subject that doesn’t hold any punches about the inhuman nature of war and for that Fury hits its mark with exceptional accuracy.