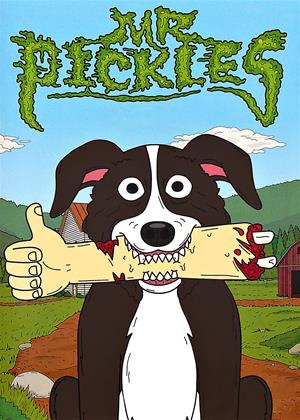 Not released
The 4th

Not released
The Bitter Buddha

Sign up
Two Guys, a Girl and a Pizza Place

Sign up
Tenacious D in the Pick of Destiny

The experimental nature of something as crude and vile as Mr. Pickles harkens to my college days of animation. We’d delight in the wild and untamed nature of the medium by doodling all kinds of ridiculous skits of the grotesque, inspired by the likes of the Spike & Mike animation festivals. Those festivals gave birth to such prolific animation directors as Don Hertfeldt and Aaron Springer. However, those directors soon migrated from the short-form gross-out humor and into something grander. Hertfeldt went onto create the most profound of animated features with little more than stick figures while Springer would become a writer on SpongeBob Squarepants, which is quite the leap for an animator whose festival short was a baby giving a blowjob to a cat.

But Mr. Pickles is what happens when the experimenting animator never shifts to something else. The bloody imaginative project of a dog getting into all sorts of unhinged violence and disgusting antics is not unexpected for a short that would be very much at home at a Spike & Mike festival. But here it is presented in the form of an entire series, where every episode features an evil dog doing evil things in an evil world. No greater satire on how a small town is ravaged by modernism nor a nightmarishly imaginative conception of such inhuman acts. It’s just an exercise in the grotesque.

In what I can only assume is a parody of Lassie, the show is about the Goodman family and the relationship between the six-year-old Tommy and his pet dog Mr. Pickles. To the family, Pickles is a sweet and loveable dog. When the family is not around, however, Pickles will scamper off to other places in town where he is more of an instigator of chaos. He dabbles in devilish displays of blood and gore, bringing death and destruction to all the residents in the cruelest and horrific ways. He then returns home and the family is none the wiser to their dog being a psychopath in town.

Mr. Pickles represents Adult Swim’s openness to anything and everything in animation. There is no way I could see any other network even considering a program such as this. This is pretty par for the course in terms of what they will take a chance on, considering their previous experiments of a talking butt detective and a mouse cop crudely scribbled on copy paper. Perhaps the path that led to Mr. Pickles was that of Superjail, a hyper-violent display of a surreal jail where prisoners and gored and savaged in all kinds of crazy ways. However, Superjail at least had the benefit of creatively conceiving is many mean-spirited means of showcasing brutality. Mr. Pickles is just gross for the sake of mere shock, the animation more ugly and bland than matching the vulgarity.

I’m sure that the likes of counter-culture teenagers may get a kick out of the mere existence of Mr. Pickles and it’s pointless displays of violence. It’s just violence for the sake of violence. Perhaps this is liberating. One can only hope that they may take this inspiration and develop something more meaningful than merely adding more rancid meat to the Adult Swim gore line-up.