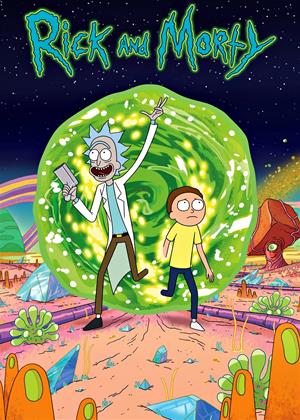 Reviews of Rick and Morty

Rick & Morty is a weird little animated show that fits perfectly into the Adult Swim family of surreal adult-animated comedy by adhering to the key element of apathy. What started as a mere parody of Back to the Future that was fueled with alcoholism and sexuality turned into a wickedly intelligent sci-fi comedy with a scathing philosophy on life. There’s a dark embrace of the absurdity and pointlessness of life while also amazed by its infinite terrors. Think of it as a sobering Futurama with less heart, more brains and too many depressants that taste so good.

Keeping with the tone of Futurama, the premise is simple enough with complicated construction. Rick is a drunken inventor who has mastered traveling throughout time, space and dimensions when he’s not constantly drinking beer, stumbling over his words, and belching. He brings along his hapless grandson Morty on different errands and adventures. Sometimes they need to save a planet and other times they just need to fix a fracturing of multiple timelines.

The comedy of Rick and Morty comes to a very absurd and depressing place. Perhaps the one scene that sums up this logic simply is the infamous breakfast conversation. Rick has invented a robot that was designed to serve butter. When the robot asks about his purpose in life, Rick dashes the bigger conceptions by ruling everything down to one function: “You serve butter.” The robot is dejected and sad but you can’t help but laugh at such honest cruelty. A more twisted admittance of this series’ function comes from Morty delivering a harsh rant about how pointless life all seems, what with their being no god and our lives being easily replaceable and minuscule in the grand scheme of things.

That being said, the film still features a lot of hilarity on much simpler layers. One episode features an army of dogs that acquire robot suits and voices to take over the planet. Another delves into Rick’s sordid history but merely ends up being a ploy for Rick’s insincere desires to require a McDonald’s promotional sauce from the 1990s. And though the designs of the series are basic, though somewhat simplified from the cruder pilot, there’s an abundance of detail in the backgrounds with all sorts of weird alien life and sci-fi tech.

The darker edge to all this may create a cynical vibe to the very series but there’s also an earnest nature to its bleakness amid its absurdity. Consider one episode that ends with Rick shaking off another adventure that sent him into questioning his future and the possibility of a family. He retreats to his garage laboratory as he always does but, in a drunken fit, quietly creates a new life and then kills it bitterly, contemplating ending his own life at that moment. So while the series does dance around dark topics with glee, there’s clearly a humanizing aspect buried underneath all its weirdness.

It’s easy to see why Rick & Morty has become such a hit over its many seasons. It resonates exceptionally well as a sci-fi comedy willing to be blunt and cynical, while at the same time treading on sophisticated themes amid such characters with names like Mr. Poopybutthole. For an animated series with characters that seem like dollar-store Family Guy mock designs, it has a lot to say and showcase beyond being a mock Futurama.