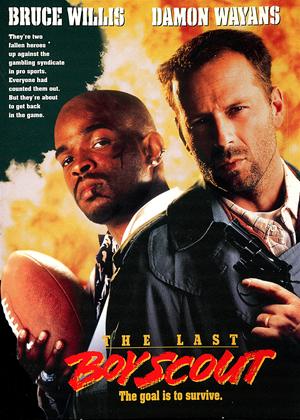 Reviews (2) of The Last Boy Scout

I rented this because I've been catching up on films directed by the late Tony Scott, the less successful brother of Ridley Scott. Having said he's 'less successful' he has directed some fairly well known films - including, in no particular order, 'Man on Fire' and 'Deja Vu' with Denzel Washington, 'Top Gun' with Tom Cruise, 'Enemy of the State' with Will Smith, 'Beverley Hills Cop II' with Eddie Murphy etc etc.

This film stars Bruce Willis (still with hair back in 1991), so you know immediately that it's going to have lots of crash-bang-wallop and gunfire - and so it proves. Plenty of violence and bloodshed, too much f-ing and blinding (even his on-screen 15-year-old daughter is foul mouthed), and the usual car chases, crashes and explosions.

The plot - I think there's a plot in there somewhere - is based around sports gambling, a dodgy American football team owner, a crooked politician, an ex-footballer as sidekick to private eye Bruce Willis who (of course) takes a few beatings but (of course) saves the day. Halle Berry gets an early small part as an exotic dancer and Taylor Negron makes an excellent baddy.

Above all, it's a mish-mash of action film clichés. Of its genre it's OK - I've seen a lot worse, but I've also seen a lot better so I'll give it 3/5 stars.

This film was rated highly in a best action top 50. So I thought it would be worth a blast. It was not disappointing but probably not in my top 50. Willis has done more exiting thrillers and funnier actions since. In this he is, as usual, a super hero detective. Super cool, but super good at detective work and funny too. There is no romantic angle. The cliched relationship development of starting as hateful enemies and ending as close profound friends is 3 fold. The ones involved would be a plot spoiler but I cannot remember seeing a triple before. The best moment of the film for me was a touchdown under pressure in which the player uses a very unusual tactic. Again I won't spoil but I think it deserved a little more reflected gloriousness as it could/should have been a split your sides moment.