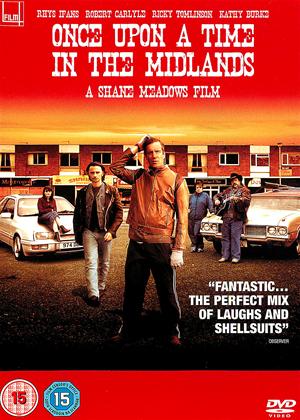 Synopsis:
Dek and Shirley live together with 12 year-old Marlene, her daughter by the sexy, delinquent Jimmy who disappeared years ago and hasn't been heard from since. Decent-but-dull Dek loves Shirley, so much so that he humiliates her by proposing without warning on national television. Like every other person Shirley has ever met, Jimmy witnesses Dek's TV proposal and he returns to town, convinced that his nerdy rival doesn't stand a chance against a renewed romantic assault from the great love of her life.
While Shirley seems destined to succumb to Jimmy's charms, he hasn't reckoned on the formidable resistance from their daughter Marlene, his sister Carol, her estranged husband Charlie, their sons Emerson and Lake, Carol's daughter Donna, her boyfriend Donut...Nor could he anticipate a heroic, last-minute challenge from the mild-mannered, lovesick Dek...
Actors:
Robert Carlyle, Rhys Ifans, Kathy Burke, Vanessa Feltz, Ricky Tomlinson, Vicki Patterson, Shirley Henderson, Finn Atkins, Kelly Thresher, Andrew Shim, Ryan Bruce, Eliot Otis Brown Walters, Antony Strachan, David McKay, James Cosmo
Directors:
Shane Meadows
Writers:
Paul Fraser, Shane Meadows
Studio:
Channel 4
Genres:
British Films, Comedy, Romance
Countries:
UK

Rent other films like Once Upon a Time in the Midlands

Reviews (3) of Once Upon a Time in the Midlands

I have to admit to having a healthy dislike of independent British cinema. Considering the enormous wealth of talent we have in this country, we consistently seem to make really poor quality films. But there is one British indie filmmaker whose films are quite simply unmissable, that filmmaker is Shane Meadows. If you've not familiar with any of Shane Meadows work, it's a bit like that of Ken Loach or Mike Leigh, except far less pretentious and far more watchable. The final part of Shane Meadows 'Nottingham Trilogy', 'Once upon a time in the Midlands' reworks the classic spaghetti western formula and relocates it in of all places, Nottingham. The story revolves around the love triangle of Shirley, Dek and Jimmy. Shirley and Dek are settled in their domestic life, with their little family that includes Shirley's daughter by her former partner Jimmy, and their extended family which includes Jimmy's foster sister Carol, her husband Charlie and their children. When Dek surprises Shirley by proposing on a national daytime talk show, she turns him down. And after seeing his ex on TV, Jimmy comes back to Nottingham to claim back Shirley. My only criticism of the film is that Meadows, (who usually casts local amateur actors, with great effect), has this time opted for a cast of high profile actors, which detract from both the story and characters themselves. The cast, which comprises of Kathy Burke (with her usual Cockney accent), Ricky Tomlinson (with his usual Scouse accent), Robert Carlisle (with a Glaswegian accent) and Rhys Ifans (with a Welsh accent), is a real mish-mash of regional accents and the characters seem somewhat out of place considering the film is supposed to be set in working class Nottingham. While 'Once Upon A Time In The Midlands' isn't Shane Meadows best work, it's by far head and shoulders above most other British films, and if you like slice of life comedy dramas, or TV shows like 'Shameless' then this is something you should definitely give a try.

I've been catching up on films directed by Shane Meadows, as I've come to appreciate his work after first seeing 'Dead Man's Shoes'. I have now watched 'Once Upon A Time In The Midlands' and while it is a much more mature and reflective work, I regard it as a good but weak effort.

Given the strong cast of well-known British actors (Robert Carlyle, Rhys Ifans, Ricky Tomlinson, Kathy Burke) I expected it to be better – but it comes across as a sort of ensemble piece, with each actor playing the same role that they've played before in other films: Kathy Burke (loud mouthed council house dweller), Ricky Tomlinson (slob from 'The Royle Family'), Robert Carlyle (edgy, close to violence). The only surprise was Rhys Ifans who gave a much more rounded and mature performance than in other films where he was cast either as a buffoon or a misguided obsessive (eg 'Notting Hill', 'Enduring Love').

I was also disappointed given the title that the film showed so little of Nottingham (where it is billed as being set) and nor did any of the characters have Midlands accents – strange.

As for the storyline, I quite liked it: stranger rides into town to reclaim his woman who has now found romance with another – or has she. The trouble is, the film could have been a great deal stronger. I rate it as 3/5 – see it if you like Shane Meadows' work.

This is an enjoyable, if small scale movie. It cleverly satirises in two directions: both the Western, and the British domestic tragi-comedy.  The sound track alone is great fun, and I find I’m talking myself upwards towards a four star review.   The film has genuinely scary bad guys, genuinely sympathetic working class characters who are blundering through their difficult lives. Robert Carlyle is terrific as the tightly-wound outsider, returning in the hope of redeeming himself and his life. I missed a lot of his dialogue, because I struggle with the Glasgow accent - but maybe that was the point? The film is intelligent enough to have been doing that on purpose. Rhys Ifans is appropriately gormless with dog-like devotion. (I’d guess a Labrador.)  Other parts also really well played, and the scenery of an ordinary Midlands town photographed with superb irony.