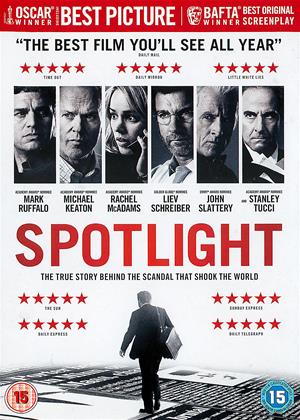 This is the kind of film that automatically gets rave reviews because nobody in their right mind disagrees with the point it's making, and it almost seems as if you're on the side of paedophile priests if you admit you don't like it. But unfortunately it isn't quite as good as many reviews claim. It's not bad, and there are some very committed performances, but it has to be said that Michael Keaton struggles to be anywhere near as interesting as he was in the superb "Birdman", probably because his character here gives him a lot less scope for characterization.

In fact, the whole movie is oddly flat. Priests commit crimes which we aren't shown, and the ghastly details of which, though we are told fairly graphically what they are, occupy as little screen-time as possible. Which is understandable; an explicit film about child abuse would be unwatchable, and possibly illegal. However, combined with the fact that we barely meet the guilty priests at all (since this is a film about real events and people who are still alive, they probably had to tread very carefully indeed around certain legal issues), this means that it's basically a movie in which some increasingly upset reporters hear second-hand about horrible misdeeds mostly done a long time ago and write a newspaper story about it, rather slowly.

Attempts at suspense are token, to put it mildly. Will Mark Ruffalo be able to photocopy the vital documents before the church gets another injunction put on them? Since we know in advance that the story did in fact run, yeah, I guess so. Will he be able to do this before a rival paper finds out about these documents and scoops the story? Frankly, who cares? With a movie like "Apollo 13", even though we know the astronauts will survive because it's a historical fact that they did, the situation they're in is so horrendously perilous that it's still a real nail-biter. But here, the guilt of the abusive priests is established from the outset, and the only real question is whether the exposé these journalists are eventually going to publish months later will be as damning as they want it to be, or not quite that bad because Vatican lawyers managed to legally restrict access to certain bits of paper.

Frankly, it's one-note, with none of the escalation of tension you need in any kind of dramatic story. And although the entire cast, especially Mark Ruffalo, are acting their socks off, the characters are so uninteresting that there are a couple of brief and very awkward scenes that obviously exist solely for the purpose of establishing that these people have some sort of life other than the very specific and limited thing they devote themselves to for 99% of the movie. The level of commitment the cast bring to the film makes it genuinely moving, but ultimately they needed a better script if they were going to make it truly great. The scriptwriters were obviously heavily influenced by "All The President's Men", perhaps a bit too much, but in the end this is one of those films which gets a couple of extra stars for really, really trying to do the right thing. I'm reviewing it purely as a movie, and I'm afraid it's not that great.

7 out of 13 members found this review helpful.

This is a highly enjoyable film and also disturbing - the massive abuse of children by the Catholic church and the way that institution covered it up for decades (centuries?) and just moved priests to other parishes to abuse again, is truly disgraceful and shocking.

It's an 'All the President's Men' for the 21st century.

Some may say it's a bit one-note but I can see no other way to tell this tale. There are enough subplots and extra characters (the devout grandmother Catholic; the abused now grown up after surviving drugs and drink; the deluded priests who thought the abuse was OK; the devious church leaders who resist the truth to protect the church; the dodgy lawyers; the population of very Catholic Boston who in effect knew what was happening but put loyalty to the church before protecting children. 'Good Germans' indeed.

A bit too long, however, and so can lose momentum and drag a little in the middle. Hence 4 stars and not 5.

I would say, however, that all institutions can behave like this - the instinct of institutions and their loyal defenders is self-preservation. So we have seen similar patterns of corruption and cover up in the police, schools, councils, universities etc.

I am also convinced that there are similar abuse scandals in other religious institutions which also demand total unquestioning loyalty - from mosques, temples etc and that there is a huge hidden problem of abuse in Muslim, Hindu and Sikh institutions. I doubt anyone would dare to investigate that, though.

Not quite All the Presidents Men, but along that direction. Alas, is an ongoing story in most countries, and still not fully addressed by the Vatican, but opened up, once again, by journalists as opposed to police authorities. As is shown, the police often helped hide the events in fact.

The spotlight team quite well depicted in the film, and Keaton does his intense thing, and maintains a thread throughout a complicated series of events.

Expect you have seen Dreamteam and Birdman, but check Paciffic Heights, if have missed it. Quite an old/slow film now, but Michael is well creepy in that............

A Story worth telling - and seeing - Spotlight review by MD

I am sure I will not be the first to mention "All the President's Men" in relation to this film, but the comparison is both understandable and appropriate, as this is very much in the same mold, if not quite the same league. Put simply, the film does nothing but tell the story of The Boston's Globe's expose of the abuse of children by Catholic priests, and that is both its strength and weakness.

Strength, because the story is so powerful and so in need of being told, weakness because it is a bit of a one trick pony that any intelligent person could outline without seeing a frame of the movie. Personally, although I found it a bit slow at times, and uneven in quality, I thought the story very compelling and the performances spot on. I am glad it got made, and I am glad I saw it. Though not without its faults, it is far, far better than most of the rubbish out there these days.

Faultless - Spotlight review by BE

I approached the movie with some trepidation as am usually wary of American Oscar winners but found it to be a top class movie. Excellently directed by Tom McCarthy and superb acting by all of the cast. I wasn't fully aware of the subject matter before I watched it but gosh, what an eye opener! Especially the information given at the end of the movie. Two hours well spent.

A difficult but must see film - Spotlight review by TB

When Spotlight won the Oscar for Best Picture and also Best Screenplay, it once again shed light on the horrendous and disgusting abuse of children by priests in the Catholic Church, and rightly so.

There have been documentaries about this, most notably Deliver Us From Evil, which interviewed one of the clergyman and saw him openly admitting to what he did and also his feelings about minors in general. Although a difficult watch, it was compelling to see his victims trying to get the justice they deserved.

Spotlight takes a very different tack. It never shies away from the events, but rather than presenting them in a documentary style, it instead goes at a slower pace, creating more tension and traction in its approach. It also has an incredible cast: Michael Keaton, who was red hot after his success with Birdman, here becomes the strong axis the film spins on; Mark Ruffalo as the lead journalist, at times exploding in anger but motivated by the horror of what he discovers; Rachael McAdams as an equally tenacious journalist who uses her disgust to keep pushing for the truth; and finally Stanley Tucci as the lawyer whose refusal to be cowed and intimidated by the Church despite repeatedly threats ensured that the victims had their stories heard.

The film is never boring and completely absorbed me for the entire runtime, never once outstaying it's welcome or straying from the events. Amazingly directed and acted, with a great soundtrack, this film is essential and difficult viewing. A worthy Oscar winner

This was an over-long 'Elephant-in-the-room' scenario where the elephant (for obvious reasons), wasn't shown just vaguely described. It felt as if it began in the middle, meandered around for a long time then ended still in the middle.

That said - the film highlighted an important social issue and given that several of the protagonists are apparently still alive there wasn't a lot of wriggle room in the legal/defamation sense.

The one stand out episode for me was the reporter doorstepping a priest who willingly admitted to child abuse as if it was the most natural thing to do. In a couple of sentences it explained the priest/child dynamic - A priest is God's representative on earth therefore must be obeyed message which this priest clearly saw nothing wrong with and adhered to.

Film-making at its best - Spotlight review by GJ

The acting was nuanced and yet striking to keep you engaged thougout the movie . The script and direction was pitch perfect . Kudos to the editing : no scene was too long or cut short . This is a film that deserves its success .

About time the truth was told about these atrocities which still happen today in same and other similar settings.

This film tells the story of the investigation by the Spotlight team of the Boston Globe into institutionalised child abuse by Catholic priests. It’s an important true story and this has caused many critics to overlook the film’s shortcomings. It certainly never reaches the heights of All the President’s Men and lacks the dynamism that Hoffman and Redford brought to that.

The drama is deliberately played down and this reduces its emotional impact. It’s filmed in a straightforward, restrained manner (‘style’ would be too strong a word). To further distance the viewer, the frame is mostly medium-shot with few close-ups. Despite plot revelations, dramatic high points are even fewer. Nevertheless the story itself is sensational and well-presented. It is this that carries the film and makes it continuously watchable.