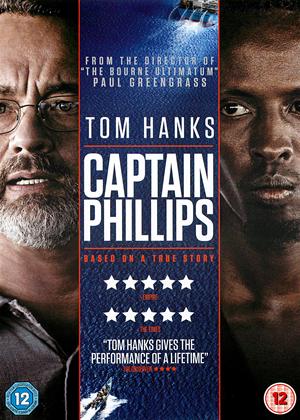 I am not usually a fan of action films, or of Tom Hanks, however, I was intrigued by this story, based on true events.

This was a thrilling, enthralling tale of modern day piracy and the strenght and will of the crew who were set upon whilst passing by (not through) Somali waters. Hanks is great and showed some of the acting gumption of his Chuck Noland role in Castaway!

Barkhad Abdi, who plays the role of Muse (main pirate) is amazing and for which he deservedly won a BAFTA and an Oscar nomination. His inexperience adds to the tension and creates a real sense that anything could happen.

What really stood out for me was the desperation in Somalia, a country with no leadership or government, where power is violence, guns and brutality. The pirates are not rich, those who abuse them and force them to 'work' are! One part of the film said it all, Muse tells Cpn Phillips that the previous year they took a Greek ship and made 6 million dollars. Phillips replies

"6 million dollars? So what are you doing here?"

Thoroughly enjoyable and I was gripped all the way through, which surprised me (and my Husband)!

I have always found Tom Hanks to be a 'wooden' actor, but here he plays his role excellently as Captain Richard Phillips of the container ship Maersk Alabama as it is hijacked by Somali pirates. The film is long - overlong - and tense; but then it descends into Hollywood farce as seemingly the entire might of the US Navy is deployed to rescue them.

I couldn't help but contrast this with the Danish film 'A Hijacking' which tells a similar tale of a merchant ship attacked by Somali pirates - far more restrained, more tense, and far more gritty and down to earth. And there's no last minute rescue by the US Navy either...

Perhaps the best thing about 'Captain Phillips' is that it attempts to give some insight into the lives and motives of the pirates and does this fairly well.

I enjoyed it, but it's seriously overlong and while it may be based on a true story it gives off more than a whiff of Hollywood drama.

I have never really been a fan of Paul Greengrass films, feeling they lack emotion and the whole handheld camera thing gives me a bit of a headache. However, Captain Phillips grips from the start and does not let go until the emotional punhc at the end. Some people appear to be criticising aspects of the story, despite them being true. Surely they are only showing what happened, including the intervention of the US Navy. Really gripping and one that will linger after the film has ended.

We really enjoyed this film. Tom Hanks was brilliant as always and the story was different so it wasn't boring and predictable. If you like drama then this is the film for you. All the characters were very real which is a credit to all the actors in this film!

I like Tom Hanks films and he doesn't disappoint in Capt Phillips. The film is excellent. The story is tense & compelling viewing.

Whatever you do watch this, you'll be truly entertained.

Can't say anymore other than ramble away as cinema paradise make you write over 100 words for a review. Guess they won't publish as it is criticism of them and their website.

Excellent thriller. The supporting cast were all superb, especially the Somalians who added to the sense of chaos and tension.

Pirates are not historical figures - Captain Phillips review by KG

Tense film showing the battle of capitalist greed against piracy.

The pirates see what they do as a way to earn a living and keep away from the wrath of the warlords, the shipping companies see the routes through pirate waters as a way to reduce shipping costs. Once in a while something is going to give.

Well filmed, believable story of what can and does happen out there.

Once is Enough - Captain Phillips review by BE

A well crafted serious movie but too long. Excellent acting by all the cast with Tom Hanks excelling in the final scene. Pleased to have seen it but would not watch it again

If you like derring-do and all that then this movie is for you. I have watched many worse movies but this one despite the flag waving rescue (a bit reminiscent of John Wayne winning WWII) at the end is a good watch - if a book can be a good read why can't a film be a good watch. Passes a couple of hours enjoyably. Not a great or even memorable movie but not bad.

Although Captain Phillips is based on a true story there is a lot that feels fabricated and considering the reaction the crew of the ship had to the film, I’d wager an awful lot of it is. However as a fiction the film is gripping with it leaving you on the edge of your seat for almost the entire second half. This unrelenting torment for the crew and the viewers doesn’t make the film as enjoyable as you might think though.

Following the story of Rich Phillips (Tom Hanks), the captain of a shipping vessel that finds itself under attack by Somali pirates, the film tells the harrowing story of survival for Rich and his crew. As they try to keep themselves safe they also must protect their ship and impede the pirates as they try to take the ship back to Somali shores. a place that could spell the end for some of the people onboard.

Filmed in a very similar style to director Paul Greengrass’ Bourne films, the story of this impressive man is full of rich detail as the documentary style adds to the experience. The film, edited by Greengrass’ go to editor Christopher Rouse, is frenetic, filled with information you can only take in on a second watch. Deeply political but never outright opinionated, the film tells a personal story with an eye for the shocking parts of this story.

Hanks is the perfect Phillips, a stern workman respected but rarely liked as he leads his crew through arguably the worst experience of their lives. Clever and cautious, Phillips is an intelligent mans action hero, an everyman full of fear and dread but capable of great acts of courage. Hanks is rarely this good these days, bogged down with bad Dan Brown adaptations, but between this years Cloud Atlas and his performance as the titular captain it feels as though Hanks is having a resurgence.

However the film drags on for much longer than it should, its over 45 minutes too long as this tense hostage situation shifts and changes until the action ceases to a halt as most of the film's major characters get locked in the same confined space together for the remainder. That being said I advise staying all the way to the end for an absolutely gut wrenching moment played to perfection as the film reminds us that at his core Captain Phillips is above all else. human.