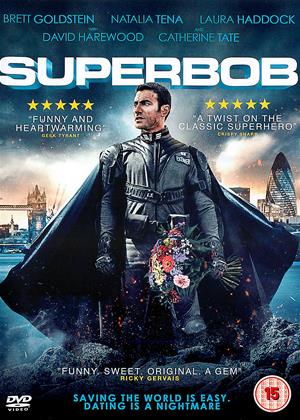 A super film about a less than super superhero. SuperBob. How many supers did I fit in there? - SuperBob review by DS

For a viewer like me, just a little tired of the Marvel and DC-verses, Superbob popped onto my TV screen like a breath of fresh air. It asks the questions that I have always like to see asked, particularly in the opening acts. After all in most more ‘serious’ superhero films, the main character is usually an ordinary man thrust into an extraordinary situation. Yet these characters are not really that, for instance, Robert Downey Juniors’ Tony Stark is virtually an unassailable superman before he even dons his tin clothes. Other more humble heroes are quick-witted, able to balance their normal life with their alter-ego’s life with ease and so it goes on.

This is the beauty of SuperBob – he is impervious, he does save lives and fly around the world, but as we find out not always – but he does have days off, he is regulated by the government and in all other aspects of his life he is fallible if not at times darn right useless. He also yeans to have a normal life and meet a normal girl and fall in normal love.

Therein lies the strength of the story. The superhero, superpower, side of the story is an important part but it’s not the story. That is a sweet love story about a vulnerable man controlled by most everything in his life despite being in reality totally uncontrollable by even the greatest governments. He is given great powers and yet does not have the strength the break free from the powers that seek to hold him in place. It’s everything the bigger budget and star-ladened similar themed Hancock wasn’t.

As a small independent film, the most important part for the makers is the cast and it is in the small ensemble of main players where they hit pay-dirt. Brett Goldstein, also co-writer, is the glue the holds the story together by playing to his strength coming across as a very ordinary Bob who has superpowers but is anything but super. He is ably supported in this role by the powerful and vivacious form of Natalia Tena who plays off Bob’s gormlessness with an engaging portrayal of the focused and firm Dorris. In the hands of different actors both Bob and Dorris could easily have been pat and cookie-cutter characters and tipped over into ‘here we go again’ territory but Goldstein and Tena traverse this fine line with skill. Drop into the fray Catherine Tate, who brings everything she is to the pivotal role as Theresa. Seemingly able to play serious boss to utter pillock from role to role without breaking stride the film-makers must have known they were entirely safe when she said yes to the film. Then finally add in the Laura Haddock as a red-herring and a bevy of recognisable British film and TV talent popping up here and there what’s not to love?

If you are going to be churlish you could say the film hits so many targets with skill with regard to super-hero film cliches and then misses the love-story one which means regular filmgoers will immediately suss-out Dorris’ part in the film within minutes of meeting her but it does not ruin the film or enjoyment and it is nit-picking. Perhaps the pace sags every so slightly in the middle but that is setting up the punchline and after the sharp and smart start the film certainly gave itself a high bar to achieve throughout it’s tight running time.

As I’ve said that is all churlish and SuperBob can certainly be filed with other successful and quirky British comedies that are coming out of the UK all too infrequently. It’s fun, warm and lovely, doesn’t take itself too seriously, makes you laugh and feel sad and rather neatly pops the pompous bubble of superhero films.

I know many will not like it for the reasons I’ve outlined, but I and others will definitely like it for the very same reasons and let’s be honest, if there was a real British superhero it would be more like this than any Marvel film. Imagine those forms….