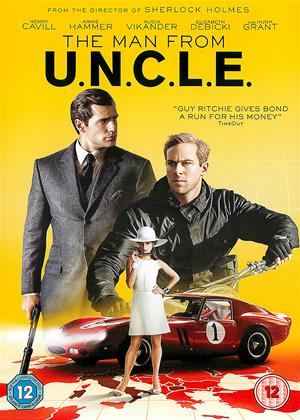 Under-powered misfire - The Man from U.N.C.L.E. review by Alphaville

A po-faced prequel to the TV series that thinks it's cool when it's merely dull. Any fun is squeezed out of it by a talky script and staid direction that constantly brings any narrative drive to a halt. The two leads can do little with their wooden characters, while giving Kuryakin a rage issue is a serious miscalculation. On the extras Guy Ritchie even says he 'didn't want them looking too cool'! And whoever thought it a good idea to include scenes of concentration camp torture?! In keeping with these errors of judgement, the film is burdened with an intensely irritating score by (BAFTA-winning) Daniel Pemberton. Even the Mission Impossible films, good or bad, manage to make exciting use of the old TV theme.

Forget then, enjoy now - The Man from U.N.C.L.E. review by MD

I am neither a great fan of Guy Ritchie films nor very well versed in the original TV series on which this is nominally based, but people who seek to run the film down either because it IS directed by Ritchie or does not conform to their nostalgic memory of the TV series are missing out on what is essentially a neat little film. It is the kind of movie they used to make in the 60s, but done from a modern angle, neither too serious nor too reverent, and essentially just a bit of good fun. Of course, one could be critical about any number of things, but why bother? The story is clear, the performances absolutely fine (Alicia Vikander does a great job of breaking up the macho vibes of the two leads) and the direction mostly very understated, a huge plus compared to other Richie outings. I watched this at home with three generations of my family ranging in age from early twenties to an 89 year old; we ALL enjoyed it. Hey, that has got to say something is right with this movie, and i certainly think it is worth a viewing.

Didnt watch the end, first time since ghostbusters 2 I gave up on a film.as I have to right a longer review it was a bad film,

Guy Ritchie is better known for producing slick crime capers, usually based in London or the underground of gangland! Turning his attention to the old TV Series, this is trying very hard to be like the Mission Impossible films, with even an ending which desperately seeks a sequel! Created as a prequel to the TV series, and introducing the main characters, this is a little too James Bond, but done badly! Set in the 60's there is some very slick styling and the scenery and settings are very smart. However given that this is an action thriller, every time there is any action, it is so badly chopped up and edited, that the action scenes become slow, dull and boring! I found this quite irritating to watch, if the editing wasn't so bad and the action scenes were allowed to speak for themselves, then it could have been quite a fun film to watch! American films also seem to have a very irritating habit of spelling out the plot for the audience, just in case they're too dim to get it and this literally spells out the plot several times, constantly re-showing what happened, just in case you didn't get it the first time around, a bit like the Sherlock Holmes series, yawn! Ok for killing time but concentrates too much on the styling and editing rather than script, acting or storyline!!

Big Fan as a kid.

BIG disappointment of a film.

A misrepresentation of the the title with tenuous links to the original (... the characters names only).

This film is not very good

Better than I was expecting - The Man from U.N.C.L.E. review by Jamielou

Whilst this film wasn't totally mind-blowing it was much better than I was expecting, which is why I didn't see it at the cinema. I didn't even know Guy Ritchie directed it, but you can tell it's one of his (better) films pretty much instantly. The 2 leads work well together, the plot's a bit all over the place but the action is pretty good, reminds me of the Mission: Impossible films, which isn't a bad thing. Shame if there weren't any more films in the (new) UNCLE series, this stands up pretty well against the originals and they made quite a few in that series!

Any similarities between this film and the 1960s TV series are purely coincidental. Napoleon Solo acquires a past as a war hero and art thief. Kuryakin has a bit of a temper. Plot is wafer thin and music is overpowering. Neither actor in the principal roles is a patch on Robert Vaughn and David McCallum.

Napoleon is a bit more muscular and smoother, and Ilya has gone steroids compared to the old TV series. Little bit of Bond, little bit Mission Impossible, so very much like the old series, which is no bad thing.

Also a bit Sherlock Holmes, which is no surprise as Guy Ritchie at the helm.

Does he know how to make films or what? From layer cake to uncle in great hops via all good films...........should have masses of funds raised in UK for us to make the profits, but bet proceeds mainly going to US. Folks too windy to support films in UK, more is the pity..............

Slow starter - The Man from U.N.C.L.E. review by SP

This film was slow to start but I soon got into it and it was good.

Partner thought it was better than the original.

The Man from U.N.C.L.E. review by Adrijan Arsovski - Cinema Paradiso

The Man From U.N.C.L.E. manages to be the most average action movie out there without being mediocre in the slightest, a feat rarely (if ever) accomplished by movie makers nowadays. The undeniable chemistry between leads Cavill and Hammer propels the experience forward without allowing it to ever become boring, but all events play almost too safe for it to become the clever, witty, amusing spy movie it desperately wants to be.

The Man From U.N.C.L.E. has all constituents of a spy/action flick which unfortunately are realized almost too formulaic following a spy/action flick pattern. One can say the movie’s never boring, and it wouldn’t be wrong to say it’s also entertaining at times. But, what’s missing at its core is a soul (I’m looking at you – generic movie Hollywood machinery) onto which a decent story should be latched, and events with causality and dependence upon one another should unravel – instead of the infamous “this happened, and then this happened, and then…” – you get the overall idea.

In continuation, and one cannot avoid but ask the question: what happened with Guy Ritchie’s signature shots, motifs and camera angles? Has the final thread of creativity and innovation fallen under the corporate umbrella of the always-thirsty movie-making machine? If so, where are the convention-defying artists that make whole movements sprout out of the melancholy of the ordinary? Well, for starters, you’ll not find them here. To avoid extensive rhetoric, what I’m trying to say is aside from few scenes - The Man From U.N.C.L.E. is unimaginative and too formulaic for its own good.

Talking about positives, and we’re getting an-always vibrant Armie Hammer playing a Russian assassin who goes by the name Illya, and whose backstory checks all marks of your stereotypical “agent-turned-rogue” convention. If only somehow the script was better, but oh well – freelance writers have to make a living one way or the other.

Not all is that average however - one scene in particular stuck within my brain: without revealing anything, it plays like a ballet of images and sounds, an idiosyncratic, juxtaposed dance with high stakes and uninvolved characters that show little to no interest to said stakes, and choose to include themselves in alcoholic beverages while others fight for their life. Its seriousness makes it a rather amusing piece that differs from the rest of the movie, in tone, humor and otherwise. Who knew that Guy Ritchie still had it in himself after all this time?

Finally, whether or not it’s worth the time, it’s left for you to decide. Remember however, if you’ve seen Bond’s suave demeanor, Bourne’s martial arts skills and Johnny English’s over-the-top misadventures – then you’ve probably seen 95% of The Man From U.N.C.L.E.

P.S. Whether or not it’s an adaptation from a 70’s popular TV series doesn’t add anything to this review in the slightest bit.