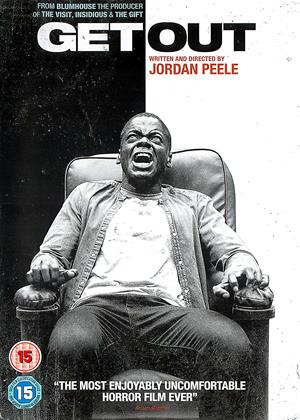 Much has been made of the race issue in this movie - but honestly, this film could have been made with an entire white cast and still be effective. In fact, the whole race thing seems tagged on. Because as one character in the film says: 'black is fashionable'. The movie has nothing to do with gender (plenty of male victims in horror films throughout the 20th century!)

Well-written, filmed and acted, though utter hokum from start to finish - and an unnecessary subplot re a deer. Sometimes just TOO much sub-Twilight-Zone hokum for my tastes because I became unwilling to suspend disbelief - it's so OTT it would read like a story written by a 14 year old boy if written down.

Couldn't believe in these people or characters really at the end of the day - and THAT would have made it all so much more scary.

Ultimately, it's quite funny - like so many horror movies.

The ending surprised me - I think the one I was expecting would have been better.

8 out of 13 members found this review helpful.

Great horror movie - Get Out review by EO

This is an ingenious horror story,which looks at racial stereotype s .The tension is ratched up.At times,it is funny.It subverts gender stereotype s,the male character as the victim.. Original

Ive read a lot of BAD reviews about this movie but Don't listen to them, Its actually a Really Good Movie. Its almost the 'Stepford Wives' of the New generation..... I wont go any further than that as it may ruin the movie for you. but its Twisted , Clever ,Claustraphobic and really rather revealing of the innate Racism that is sadly in everyone, weather they admit it or not ,

I think its a Must See Movie of 2017 . If this movie didn't effect you in even the slightest way then you are probably part of the problem .

Overhyped! - Get Out review by BW

Not anything like as good as I’d heard from other sources. Neither suspenseful, horrific or particularly well acted.

Rubbish - Get Out review by KB

Load of rubbish .Described as a comedy horror but is neither funny or scary .What it is however is silly & boring.

rubbish film - Get Out review by OP

This film is completely vacuous, not horrific, not full of suspense and certainly not what its been hyped up as.

Total disappointment - Get Out review by TE

Ludicrous narrative with no explanation for the behaviour of any of the characters.

If there is some commentary going on about race relations its buried under a rubble of student level writing and directing.

Good first half, but turns into nonsense - Get Out review by LC

It's tough to rate this film, as it's very much a film of two halves. The first half, where a black guy visits his white girlfriend's parents, is a nicely paced slow-burn horror, where everyone he meets is strangely off-kilter, and some mysterious secret lurks below the surface. Unfortunately, once we finally get the big reveal of why everyone's acting so strange, the film shifts into pure hokem, with an outrageously over-the-top finale straight out of a 50's sci-fi B movie. Any sense of realistic character drama goes out the window, and the tone as a whole drifts towards comedy thanks to the increased presence of the hero's sidekick friend. Still - nice photography, and some may be able to ignore the ridiculous plot of the second-half, and just read it as an allegory on race relations. It's audacious enough that it's probably worth watching once, but tonally it's a bit of a mess and impossible to take seriously.

Intriguing - Get Out review by HM

Well a good suspenseful watch with thought provoking hints at race tension without really going there. Kept me wondering what it was all about until the end when it spins off as a thriller keeping its hints a secret. A sort of horror movie from the 50s but enjoyable right now.

Over hyped. - Get Out review by AA

It's an interesting premise. Good horror moments, and you'd be probably thinking twice about going to visit folks. The film probably could have stood on it's own without the race element, but hey it's a good way to fill the time.

Horribly Entertaining - Get Out review by IG

I found this film very amusing, unsure if that was the emotion the producers of this film intended. The story is far-fetched, but, that is true for most fantasy horror movies. I was not a big fan of Daniel Kaluuya but his performance in this has changed my view on him for the better. Some of the subject matter might offend the easily offended, but, most people will I am sure find this an entertaining watch that does not stretch the grey matter much.

Get Out review by Mark McPherson - Cinema Paradiso

Jordan Peele’s Get Out is such a strange and sensational thriller that challenges as much with its social satire as it does with its truly terrifying story. With its initial premise of a black man coming to visit the family of his white girlfriend, there’s a racial tension in the air, but not an obvious one. Her parents are not racist in the traditional sense of hating black people. They’re on the other end of the spectrum where they’re inviting of black people and adore them with an ignorant fascination. They love them so much that they have a sinister plan for them.

While this uneasy tension leads the movie into a Twilight Zone style story of sorts, it begins with a relatable situation. Photographer Chris (Daniel Kaluuya) is a little uneasy to be visiting with this family, but seems to take it in stride much easier than his girlfriend Rose (Allison Williams). She assures him that her family is more embarrassing than racist, stating that her father will try to show off by confessing he voted for Obama twice. A family reunion that takes place at her house the same weekend and it’s just as uncomfortable as expected. Her family fawns over his uniqueness as a black man at a very white gathering, viewing him more as a unique specimen than a human being. It’s even more uncomfortable that her family has endured black servants that don’t appear to be themselves. Something weird is going on here, but it’s something Chris doesn’t see coming for how strange and frightening it turns out to be.

Without giving too much away in this thriller with a twist (and what a twist it is), Get Out is a movie that takes a satirically aware eye to the new breed of racism, but also focuses on a loss of individuality. None of the character in this story feel comfortable with which they are, mostly from a perspective of race. Chris tries to shrug off Allison’s ignorantly progressive family, but still feels very out of place at a home filled with white people. There is a black person in Allison’s extended family, but he seems so distant from what Chris perceives to be black. Allison’s family shares an admiration of black people so strongly they feel ashamed of not only the racism associated with their race, but for being white in general. The only person Chris seems to connect with at the reunion is a blind photographer (Stephen Root) that shares Chris’ passion, but hates that he can no longer see photos. Everyone seems to be somebody that hates who they are in some capacity, believing that either society or life has cheated them in some way. The villains of this picture are the ones that want to find the easy answer, despite a not so easy or even believable procedure.

The film echoes the likes of Hitchcock, but still feels genuinely fresh in its approach that never settle on a simplistic tone. One can’t help but think of Rear Window when Chris uses his camera to spy on members of the family to figure out what they’re up to. However, it’s a technique that’s used brilliantly as the use of the camera acts as more than just a framing device for unique shots. There are a few jump scares, but none of them are fakeouts. There’s genuine terror on screen as Chris slowly peels back the layers of Allison’s strange family.

What’s most surprising about the picture is how funny it is for evoking comedy directly out of the situation. Chris keeps in contact with his TSA friend who continuously warns him that the family is planning on turning black people into sex slaves. It’s hilarious that he’d suggest such a possibility, but even more amusing for how he believes it to be true and how he’s not too far off from the truth. The awkwardness of Chris’ conversation with the seemingly well-meaning parents breeds laughs of unease for situations that are both believable and cringe-worthy. It creates an atmosphere that is very believable that by the time the weirdness of the sinister plot is revealed, it’s both shocking and fitting.

This is a film that’s destined to go down as a cult hit for being both a telling snapshot of the era and a freaky thriller in the vain of They Live. It works on so many levels: a warning sign for the swinging pendulum towards progressive racists, the heated relations between races, a campy situation thriller premise and a truly scary scenario of rejecting individuality. The film walks a fine line between comedy and terror, evoking the right amount of satire and unease from a frightening scenario. In this current age, a progressive trying to be more hip with black people is more terrifying than a masked maniac wielding a knife. You can laugh at that sentence, but it’s hard to deny there’s truth in such a premise.