Rent The Adventures of Tintin: The Secret of the Unicorn (2011) 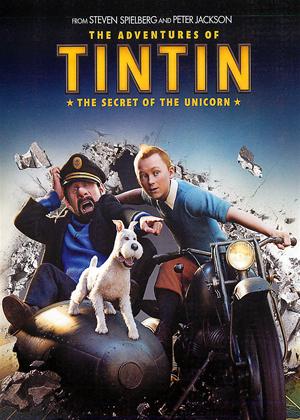 Rent other films like The Adventures of Tintin: The Secret of the Unicorn

Reviews (3) of The Adventures of Tintin: The Secret of the Unicorn

Entertaining animated film, despite messy second half - The Adventures of Tintin: The Secret of the Unicorn review by PV

First off - Tintin is BELGIAN and NOT French: the writer was Herge (Georges Remi). Secondly, some have complained that there is a problem with accents; I disagree. The film is set in a non-descript and non-specified place - not meant to be France or London, but a city of imagination. I thought this worked really well actually. It chances its arm with location and pulls it off - because y'know there are people with various accents who work at street markets in any city!

The first half of this movie is excellent; the animation is a tad creepy at first, but the script (written by Stephen Moffat, Edgar Wright, and Joe Cornish) has enough wit to keep up the pace and characterisation. Some lovely attention to detail (watch the background always!) lifts this above usual flat animated movies, and some double entendres are there (probably only laughed at by British audiences). Some good jokes too, lovely animated dog and cat, and a basic polt set-up, and it's all going spiffingly. And then...the director (Spielburg) needs his chase - which is VERY confusing, with no idea who is who, and ultimately boring. This film sags in the second half but no matter - characterisation, animation, plot and script still merit 4 stars - and it's fun trying to recognise the voice-overs of so many British actors too (from Jamie Bell to Daniel Craig to Simon Pegg/Nick Frost etc). I doubt there'll be a sequel though - which is what the ending sets up.

Never again - The Adventures of Tintin: The Secret of the Unicorn review by Alain

I never write reviews on this site, but I feel it is my duty to warn potential viewers about this film. This is one of the worst films we had ever seen.

My wife and I saw this from two different perspective. She loves Tintin and I don't. However she was just as appalled as I was but for different reasons. We were aware that they had mixed up several stories to come up with the feature length movie, and were open to the idea. Nevertheless, it seems they have only done so as an excuse to add action (mainly chase) scenes wherever possible. That wouldn't be too bad if the action wasn't outrageously over the top. There are some decent parts (mostly at the beginning) but the movie soon spirals out of control. The only thing we were able to decide was which scene was most ridiculous:

- was it the scene on the boat? (retrieving the keys from the mariners?)

- was it on the plane (when Haddock burps into the tank to keep the engine going)?

- was it the Pirate attack scene (where two wooden ships collide, get stuck at the top of their masts and the smaller dangles on a rope, swinging to and fro in the roughest seas you've ever seen) (oh, and there is a guy who wears a cape on fire for a good few minutes before taking it off)

- was it the grand finale with the battle of dockers' cranes.

We like to be entertained like anybody else, but this was atrocious and cringe worthy most of the way. Also, it is a typical textbook example of Hollywood ruining something which would have been good if done modestly, but they just had to go too far. They had to turn this into a big action movie, made for American attention spam.

Indiana Jones goes to Cartoon Land - The Adventures of Tintin: The Secret of the Unicorn review by CS

When this film first started I really liked it. The style of animation is superb, but soon gaping holes started to appear in the fabric of the film. Tin Tin is in a Parisian Street market, speaking to a painter with a very french accent, then he speaks to a smallholder with a very strong london accent, then the police are british, the captain has a very strong scottish accent and to cap it all, Tin Tin, who is French, has a very middle class English accent! Accents aside this started off as an enjoyable romp of an adventure and the first two thirds of the film were coherent and flowed very nicely. Then along came the chase and action sequences which turned literally into an animated version of Indiana Jones, no surprise as this is a Spielberg production. However the chase sequences were so fast and choppy as to be incoherent, like Indiana on speed, they were very badly edited and it was hard to see what was actually going on. So in effect this is a French hero given an English/American styling and then two thirds of the way in it turns into Indiana Jones. And I hate films that end without an ending so that they can make a sequel, which sadly has happened here also!! So nice idea but nothing new here from Spielberg, given his last few films he seems to be stuck in Indiana Jones vs E.T. Mode!! A good family film for a Sunday afternoon, but not one to keep.

The Adventures of Tintin: The Secret of the Unicorn review by Melissa Orcine - Cinema Paradiso

Based on the beloved comic books by Belgian artist Herge, ‘The Adventures of Tintin: The Secret of the Unicorn’ is an adventurous romp in 3-D motion capture animation. It’s an unusual fusion of traditional storytelling with digital presentation, and if Tintin fan boys would have it, this is just blasphemy at best. However, who says you can’t try? With that in mind, director Steven Spielberg and producer Peter Jackson pushed through with the project.

‘The Adventures of Tintin’ film lifts from three comic book titles: The Crab with the Golden Claws (1941), The Secret of the Unicorn (1943), and Red Rackham’s Treasure (1944), but with this 3-D CGI update, Tintin, his loyal pet dog/sidekick Snowy, and the rest of the characters look nothing like their counterparts in the comics. A bold and risky move for Spielberg and company, but with the re-imagining of the popular characters, come inspired casting with its voice actors. Jamie Bell is Tintin, Andy Serkis is the surly Captain Haddock, real-life bromantic actors Simon Pegg and Nick Frost are the bumbling detectives Thomson and Thompson, respectively; and Daniel Craig is evil Sakharine. Such a stellar group of actors to bring the Tintin characters alive, yet somehow the film doesn’t exactly result in warm feelings.

Motion capture animated features have the curse of dead eyes amongst its characters. With ‘The Adventures of Tintin’, there’s a hint of a sparkle but still, no fireworks here. The action-packed sequences are adventure movie fare; this is where you can definitely see Steven Spielberg’s hand expertly at work. Frenetic, fast-paced, and amazingly detailed, Tintin’s run-ins with crooks and running to and from adventure make for intense thrills. Yet it could get a little Michael Bay senseless; the story at times put aside.

‘The Adventures of Tintin’ is a brave and interesting attempt at putting a new spin at an old classic. You must admit that it’s quite disconcerting to see Tintin and company in their CGI forms. Sometimes, it might be better if Tintin was filmed as a live action feature.