Rent Transformers: Revenge of the Fallen (2009) 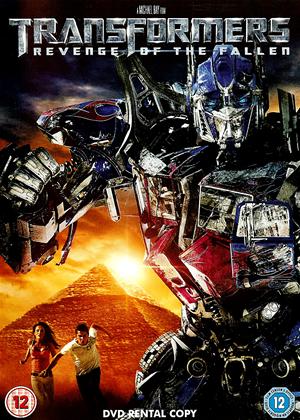 Release Date:
30/11/2009
Run Time:
150 minutes
Languages:
English, French, German, Italian, Spanish
Subtitles:
Danish, Dutch, English, English Hard of Hearing, Finnish, French, German, Italian, Norwegian, Spanish, Swedish
DVD Regions:
Region 2
Formats:
Pal
Aspect Ratio:
Widescreen 2.40:1
Colour:
Colour
Bonus:
Disc 1:
This disc includes the following:
- Main Feature
- Commentary by Director Michael Bay and Writers Roberto Orci and Alex Kurtzman
Disc 2:
This disc includes the following special features:
- The Human Factor: Exacting Revenge Of The Fallen This exciting "making of documentary takes you to the shoot on the Great Pyramids for a behind-the-scenes look. Discover the secrets of the film's visual special effects with its unprecedented military access
- Deconstructing Visual Bayhem: Multi-angle sequences allow you to explore key scenes and discover how some of the movie's most spectacular stunts were created
- NEST: Transformer Data Hub (SO) Get to know twelve of the film's Transformers inside and out. You have access to their confidential files, each loaded with an innovative 3D-spin gallery, as well as a timeline charting each Transformer's origin, back-story and design evolution
- Blu-Ray exclusive - The AllSpark Experiment: Unleash the power of the recently recovered AllSpark shard. Begin by choosing a vehicle and customising it with a selection of parts and accessories. Then apply the AllSpark to your creation. You might unlock a secret about the future of Transformers

Rent other films like Transformers: Revenge of the Fallen

Reviews (1) of Transformers: Revenge of the Fallen

For anyone who enjoyed the first Transformers film, then this sequel is for you, and you are to blame for its existence. Now epic in size and budget, few blockbusters can come close to the spectacle of Revenge of the Fallen. However its just one extremely long fight sequence with little substance, plot or character interest. Michael Bay should stop applying his terrible formula and retire. This is so bad that it makes other disappointing blockbusters such as the Knowing look like Citizen Kane.

After the success of 2007’s Transformers, Michael Bay wasted no time jumping into the sequel but he probably should have waited. To understand why you need to understand the climate of 2007. Around late 2007, a writer’s strike was underway to demand better payments for screenwriters. With the screenwriters of Transformers 2 absent, Bay decided to move forward with the synopsis that had been written. Taking the story into his own hands, he churned out one of his most embarrassing films to date and highlights just how much damage he can do when left to write a script.

Revenge of the Fallen somehow manages to be far worse than Transformers in a number of ways. Shia LeBeouf now plays the plucky teenager headed for college and finds himself thrust back into the world of Autobots and Decepticons. He experiences visions of the past as the writing further tries to reason that Transformers have just been hiding out for millions of years and just now are starting to rise from the shadows. He’ll do so by mindlessly scribbling runes all over the college campus, including the awkwardly placed Bad Boys 2 poster on his wall.

All the Autobots and Decepticons return in the oddest of ways but the additional bots are some of the most baffling and inappropriate. Things start off small, literally, with a mini Johnny-5 style Decepticon who speaks like an exaggerated Joe Pesci. Then we get perhaps the most racist robots ever seen in these movies: two robots meant to represent exaggerated gangsters and stereotypes of black people. This is highlighted by the characters having gold teeth, speaking about how they can’t read, and going into battle with such cries as “put a cap in his ass.” The apologists would probably argue it can’t be racist because robots don’t have races. Sure thing, racist. Then there’s the Transformer made of other Transformers by the title Devastator, a Decepticon so massive that it literally killed slews of computers just to finish the final renders.

Michael Bay got really involved with the shooting process and tried to frame his fight scenes to be as chaotic as possible. The result is a mess of a movie where nearly every fight is loaded with shaking angles and blurry bots battle about the screen, so smeared in their visual effects that it’s often hard to tell one Transformer from another. The characters are already a heaping pile of endlessly moving parts that one would hope Bay would fair more stable shots to take in all the details.

The plot is about as messy as the action. I’m honestly not sure what the film is even about and I’ve watched it twice. Something about the AllSpark being some representation of all life or something? There’s a battle for Energon and protecting humans is kinda more of a side mission that the Autobots don’t seem as interested in. The film also starts up a lot of bad habits of the series where Optimus Prime will constantly make heroic speeches about fighting with honor and then proceed to win with the dirtiest of tactics.

There’s a lot of other questionable choices in how Bay frames his film but I’m probably preaching to the choir at this point. Dunking on Michael Bay is an easy sell considering how loud and excessive commercial thrills his films tend to be. I’m sure that even proclaiming this to be one of Bay’s worst films would probably be recognized as an oxymoron. But as someone who has found worth in Bay’s brashness for projects like Bad Boys and The Rock, I can’t say I’ve seen any other film of his that misfires so greatly as Revenge of the Fallen.