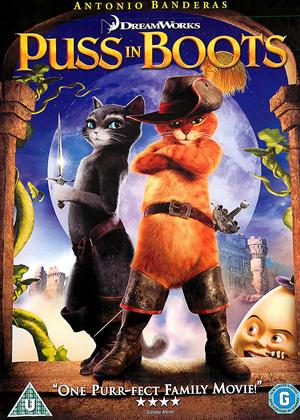 Reviews of Puss in Boots

Puss In Boots was only a tag-along sidekick in the ‘Shrek’ films – a charismatic, melt-you-with-my-eyes feline injected with a heavy dose of delusions of swashbuckling grandeur. Voiced by Spaniard Antonio Banderas, Puss In Boots is as suave as can be – but can he be the star of his own movie? Luckily, ‘Puss In Boots’ has enough of his own cat swag to carry an animated ‘Shrek’ spinoff and it looks like this cat will have nine lives.

In Dreamworks ‘Puss In Boots’, our hero is on a quest to find the magic beans so he can grow a towering beanstalk that would lead him to The Goose That Lays The Golden Eggs. Simple enough, right? Not quite. See, there are others after said magic beans, the declawed yet sexy cat thief Kitty Softpaws (Salma Hayek), and Puss’ arch-enemy Humpty Dumpty (Zach Galifiniakis). They all know where the magic beans are – at the care of villainous Jack and Jill (voiced by Billy Bob Thornton and Amy Sedaris). Puss, Kitty, and Humpty Dumpty will have to figure out how to outwit each other. Because nothing says adventure than stealing magic beans.

Wonderfully rendered in 3-D, ‘Puss In Boots’ utilizes this magic to the eyes – not only are you treated to a rich depiction of cat fur, the action sequences between Puss and Humpty Dumpty are stellar. And have you seen Humpty Dumpty? He’s an egg but he’s so beautifully showcased! With ‘Puss In Boots’ we also get the origin story of why Puss and Humpty Dumpty become arch-enemies Then there are more nursery rhyme and fairy tale characters brought to life and they are magnificently introduced filled to the brim with outrageous personalities.

Animation is directed by Chris Miller who was responsible for ‘Shrek the Third’ but with the cat front and center in his latest project, it is way funnier than his recent effort. Actually, this is just like the first ‘Shrek’ where the jokes are funny and both the young and old can appreciate. Gone are the snarky quality and snippy dialogue, but lighthearted humor abound.