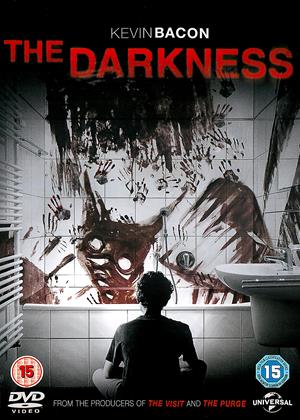 Reviews (1) of The Darkness

Dark..mess. - The Darkness review by porky

I cant even remember what this was all abut... i remember Dirty hand Prints all over the place ........not much else stayed with me to be honest.

5x Mystical stones....that was it...Native American Tribal Demons. trapped by the stones ,a child takes the stones and lets the Demons free.

Not a Good Movie by any means, but watchable, if you can find something else on the list to watch that interests you ,then choose that instead.

Straight from the pits of rehashed and recycled scripts comes The Darkness – a movie which is progressively worsening Kevin Bacon’s acting career in a trend that continues from 2010 onward. It’s lazy, cheap and everything we’ve seen over and over again in installments that’re nurturing similar generic horror tropes. When you come to think about it, The Darkness is not even a horror movie, since you can only be successively terrified by the same scare/s for limited amounts of time. What a shame.

The Darkness abounds with familiar acting names like Kevin Bacon, Radha Mitchell and Paul Reiser whose recent works include Whiplash and an appearance in the comedy series that is Red Oaks. Carrying such weight behind his name, it’s really strange why Reiser would waste his talents starring in a film that’s recycling all-too-familiar materials to produce nothing we haven’t seen before, apart from the obvious (see: paycheck). It also makes me wonder if actors could somehow know if a given feature is worth investing their times into – after all, they can’t possibly predict if a film will become a financial and critical success, or instead will go down in history as failure of epic proportions, if any.

Further down, we see how characters inhabit archetypes, or more accurately: all-too-familiar stereotypes in the form of an alcoholic mother, promiscuous father, the rebellious daughter and the sick son whose actions inevitably lead to a doomsday scenario for the dysfunctional family. There’s also some ‘mysterious’ rocks thrown in there for good measure, which are as scary as potato in an elevator.

Speaking of archetypal characterizations, it could’ve been made that the son, who is an autistic kid btw, to carry the mystery further by developing his motives, wills and desires. Instead, he ends up being pretty one-dimensional with your occasional footprints and handprints in mirrors and similar ‘passageways to the nether-realm. Pretty boring if you ask me.

The Darkness doesn’t even work as a family drama. Instead of working with locations that’re actually believable, we get visual insinuations of what would’ve happened if such-and-such went to ‘location no.7’. Budget constraints cannot and shouldn’t be an excuse for poor writing and direction, since we know many who’ve made more with less.

The story is brimming with potential. Native American legends and folktales are always welcome an experience if realized right. But whenever Bacon exchanges looks with a certain ‘ghost’, things go corny and you cannot take it serious anymore. An excellent premise ruined by its uninventive execution.

All things considered, The Darkness is to be skipped at your leisure, or if you decide to go into the experience, please now what awaits on the other side.