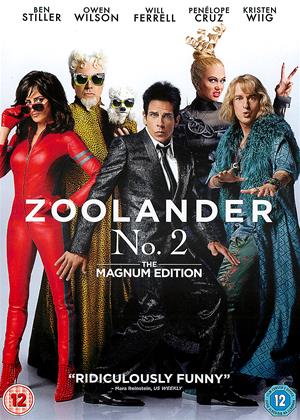 Sign up
Tenacious D in the Pick of Destiny

More of similar - Zoolander No. 2 review by NC

If liked Zoo 1 then will like Zoo 2, and the reverse applies. Is a bit better to be fair, as you can spend time spotting all the cameo folk percolating throughout the extravaganza. Bit of light fun.

Much better than 2 Stars! - Zoolander No. 2 review by jw

Well, I loved the first film and when i saw the rating of 2 stars i was waiting to be really (really) bored, grossed out and impatient. Not so, as a fan, I was given lots of opportunities to relish previous jokes and new ones. Great gross characters like 'All' (Cumberbatch). There was a bit of a plot, but don't let that put you off because it did get forgotten to some extent in the entertaining silliness of it all. A great follow on to Zoolander.

a mess of a film - Zoolander No. 2 review by vd

I had medium level expectations for this one but didn't expect it to be this bad. It descended into silliness around the 60 minute mark, not recommended

Silly and Fun - ignore the critics - Zoolander No. 2 review by HG

This is adult gross out - you need a fair amount of knowledge and pop culture awareness to get some of the jokes but there is body part humour in there too - the plot is deliberately ridiculous and in poor taste but that's part of the charm. It's not pushing many boundaries and I'm sure it's partly a commercial exercise after the success of Z1 but like Wayne's world 2 it's probably worth it and you will be quoting it in the right company. If you've had a couple of drinks you'll probably laugh out loud a lot.

Zoolander No. 2 (aka Zoolander 2) review by Mark McPherson - Cinema Paradiso

There’s one aspect briefly harped on in Zoolander 2 that I almost want to commend the film. The movie doesn’t pretend that the returning characters are still relevant or ageless models in the fifteen years since the first movie. Derek Zoolander (Ben Stiller) and Hansel McDonald (Owen Wilson) come out of their solitude only to be labeled as old and lame by the modelling industry where they considered themselves masters. Unlike Dumb and Dumber To, nobody in this picture pretends this is a simple continuation where time stops. The picture almost makes this a focal point of the plot involving age.

Unfortunately, the script does little to improve its dated formula. Instead, it delights in unearthing all its beats and mannerisms to bank on the nostalgia of the first movie. If you seriously laughed hard at Derek performing his ridiculous pout face, misunderstanding technology and just plain looking like a fashion fool, chances are you’ll get a kick of seeing all of that regurgitated up on the screen once more. If you’re like me and was fairly indifferent to the comedic appeal of Zoolander, this sequel comes off as the tired retread I feared it would be.

Derek and Hansel are called upon by a spy agency to investigate the capture and murder of several models and celebrities across the globe. During their investigation, met with a modicum of interest by our ignorant protagonists, they discover that some evil is behind this scheme that desperately seeks the legendary fountain of youth. In between this hunt, Derek and Hansel must come to terms with themselves being dads. Being a stylish model, Derek grapples with his lost son being both obese and far more intelligent. Hansel, used to the swinging lifestyle, has commitment issues when several pregnancies are dropped upon him. These arcs are muddied up by the constant need to insert Stiller’s humor which mostly involves his characters saying stupid things and looking ridiculous.

There must be some big in-joke with Stiller’s Zoolander as his character never did much for me. It’s sad to think that this is Stiller attempting to go outside his typecasting perform as a character. All he has to offer here is funny faces that are more implied than actually funny. Owen Wilson is pretty much following with the same formula, but he doesn’t stray too far from his usual lukewarm Matthew McConaughey impersonation. Oh, if only McConaughey could swoop in and save this picture. Instead we’re treated to a cavalcade of cameos which spend far too much time being drug out and pointed at. The movie opens with the actual Justin Bieber being gunned down in a manner less amusing than when he was previously shot on a TV cop show. MC Hammer pops up because...I guess it’s amusing that Stiller convinced him to be in this? And probably the most off-putting of cameos is one by Neil DeGrasse Tyson who is trotted out to do little more than say “I’m Neil DeGrasse Tyson, bitch.”

While I found myself tired and annoyed by the constant use of cameos, there are a few bright spots to prevent it from being the worst movie of the year. Benedict Cumberbatch appears as a transgender model called All that confuses Derek and Hansel with his ambiguous gender. Sting brings a little bit of engagement in how he spins the ridiculous backstory of this plot. And Will Ferrell brings back his comedic force as the evil Mugato, appearing in the third act to state how stupid the entire supermodel lore is to these people. It’s almost a high point in the picture if it weren’t for the fact that I’d been watching this ludicrous plot for an hour with nobody questioning it up until this point. Was this movie supposed to be a prank? It sure felt like one in how nearly every joke from the first movie is repeated as though Zoolander was some sort of masterpiece. Remember the scene where Derek goes out for a snack with his buddies to the tune Jitterbug? That scene is present, but with his son instead of his friends and ending with his car flipping so many times they’d both be dead. And by this point in the picture, I really was hoping for such a dark turn if only for the movie to take a chance. Instead of creating something new, Zoolander 2 simply maintains the smug pout and prays you’ll laugh once more.