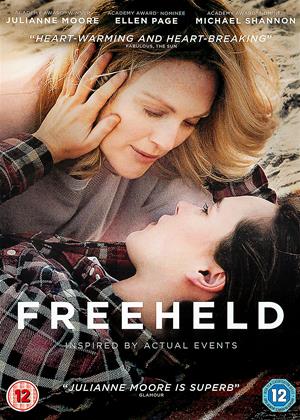 The DVD of Freeheld makes both the smart and stupid mistake of including the award-winning documentary short on the true story of Laurel Hester and her fight to ensure her young lesbian partner would receive her benefits after cancer takes her away. It’s a brilliant short and is a story worth telling. The docudrama assembled for it in Freeheld, however, is not quite that film. It’s astonishing that a film such as this would wrap all these top-tier actors into a script that essentially comes off more like a lukewarm TV movie than a poignant drama for the big screen.

Julianne Moore plays Laurel as a hard-working cop that realizes she has to try twice as hard in a department where she’s the only woman. She’s a hard enough cop and gains the appreciation of her partner Dane Wells (Michael Shannon) who is willing to defend her in the field. Realizing she can’t be very open in such a closed-minded world, she hides away her homosexuality which is not easy. While at the bar, she stumbles into a relationship with the understanding of Stacie Andree (Ellen Page). Thus begins a relationship that she tries to keep a low profile with, explaining away Stacie’s presence as that of a roommate or gardener. She doesn’t want to risk her job.

But when Laurel finds herself afflicted terminal cancer, she can no longer hide her secret, considering she wants her benefits to going towards Stacie. The city has refused to grant these benefits for what starts as government paperwork but eventually becomes more apparent as officials feel that supporting homosexuals is icky. Nobody on the board wants to fight for Laurel, even those that like her, as they fear they’ll be called out as queer and that it’ll damage their careers. However, as the political heads gain more ire for their denying of equal treatment, the political theater revs up its engines for a battle of the council.

This film treats its tale with an uncomfortable level of safeness, where intentions and personalities are pulled for these actors straight out of the hand-holding playbook for easily-digestible message movies. Moore and Page give the best performances by far and are careful never to give too many tears for risks of turning this into melodrama. Shannon is always good but his role as the first guy to stand up and fight for gay rights in his office comes only as a mild journey in deciding to do the right thing and telling his homophobic co-workers to go to hell. But then there’s Steve Carrel entering the picture as a gay activist who tries to sell his homosexuality in odd bits of dialogue. When Laurel asks if he’d marry her to gain benefits, he remarks dryly that he would but wouldn’t know what to do with her vagina.

Freeheld stages plenty of the expected scenes for such a tale built for a somber score to drive the drama. There’s an obligatory shot were to make her cause an ill Laurel will be wheeled to a city council meeting, surrounded by co-workers that finally come to her defense as they march into the meeting. We hear passionate speeches made at many meetings and watch Dane do the investigative hard work while Laurel slowly whithers closer towards death. With the best intentions, Freeheld only comes off as typical, playing things too safe with a story that feels like it should carry more emotional weight than a mere battle of standing up to homophobes and getting a council to vote for equal rights. Important, yes, but there’s nothing here you can’t get more from the documentary short.