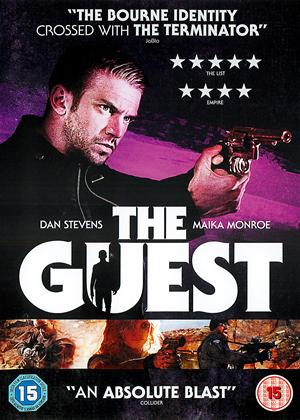 Reviews (6) of The Guest

This film has gotten some pretty good reviews, and I have to admit that, taken as a dumb and largely gore-free psycho killer thriller, it passes the time well enough. The trouble is, it's a little bit too dumb to really work. The tone switches more or less randomly between genuine tension and black comedy, especially in the latter stages, meaning that the comedy isn't all that funny, and the tense moments are compromised because you don't take them seriously. And of course, it's no spoiler to reveal that most of the characters who die are so obviously doomed from the first second they appear on screen and reveal themselves to be stupid, promiscuous, immoral, or just plain annoying that they might as well be wearing red Star Trek shirts.

It would be entirely forgettable were it not for the performance of Dan Stevens as the central character. His ability to portray the same person as both glibly charming and horribly threatening, and to switch between the two effortlessly with no warning at all, makes him very watchable indeed. He's definitely somebody to keep an eye on, and given his acting ability, combined with good looks and a ripped physique, I think we'll be seeing him in a mega-budget superhero movie at some point. Maybe he's even got his eye on Bond or Batman, though I don't think he's quite that good. Then again, he's a young actor who obviously needs more experience and better scripts to reveal what he's truly capable of, so who knows?

Unfortunately, good though Dan Stevens is, the plot is so bonkers that I kept finding myself jerked out of the story by thoughts such as: "Wouldn't elite special forces personnel know that if you're trying to shoot a man inside a flimsy wooden building with automatic weapons, keeping your gun level so that all the bullets perforate the building in a perfectly straight line at waist height won't kill anyone who has the sense not to stand up?" Or: "If this person is so pathologically determined to conceal his identity that he murders anyone who knows who he really is, how come he uses his real name throughout the movie, and goes out of his way to connect himself with the relatives of a dead man linked to all the stuff he's trying to hide, even though he has no apparent motive whatsoever to do this?"

So basically this is a low-budget B-list action thriller that requires you to switch off your brain, and has loads of complicated backstory that's glossed over in a sentence or two because they can't afford to show you any of it, made a little bit special by one very good performance. And if the ending doesn't make you facepalm, you're not sentient.

Films about the nice neighbour/babysitter/guest from hell are usually one-trick bores but The Guest takes the genre to a whole new place. Dan Evans is such a deceptively charismatic lead that the plot grips from the start. Even the teenage daughter character, often played as an airhead, is here given a new lease of intelligent life. But hold on a minute. Why is Dan being SO nice to the family that takes him in? You’ll have no idea unless you watch the trailer. DO NOT watch the trailer.

Just when you think you’ve got it all figured out the film breaks out of the formula and ramps up both the intrigue and the action. And the humour. The third act climax is a riot, a complete mish-mash of genres that is startling in its choices yet fully delivers. It left some unimaginative reviewers struggling to keep up with the tonal shifts, but praise to director Adam Watkins for his ambition. Praise also to Steve Moore for a terrific Goth-electronic score featuring bands such as Hocico and Front 242. Brilliantly original.

Horror? Action? Phsycho Drama? Revenge? All the above! - The Guest review by JD

What starts off looking like your typical unwanted guest type film, this starts swinging around pretty quickly as a mixture of all sorts and leaves the viewer unsure exactly whats happening for much of the film.

But while its doing that it is an engaging watch and is even funny at times.

Its not without it flaws, at times its a bit 'really?' but remains highly entertaining throughout. Not sticking to the one genre really does keep you on your toes.

4 stars is perhaps a smidge generous imo, but I enjoyed it enough to think its more of a well worth watching than a 'maybe'!

(No spoliers) The Guest is an easy-to-watch action-packed movie. A grieving family welcomes a friend of their lost son into their home. But not everything is what it seems.

What starts out as a brooding psychological thriller ends up as a homage to Dario Argento. A modern take on an 80s horror/thriller stable with soundtrack to match.

Clever, tense thriller, featuring the talents of the rising star Maika Monroe. The music is excellent and well juxtapositioned and the film is never dull and well paced.

Now, this is my kind of film. It has suspense, intrigue, action, and attractive actors. What more could you want? The first half of the film delivered brilliantly, and it only got better as the film became something entirely different. It doesn’t take itself too seriously, and you can just sit back, relax, and enjoy 90+ minutes of pure entertainment.

The Guest introduces us to David, who one day turns up at the home of the Peterson family. He does not know them, but claims he was a friend of their son who recently died in the war. They accept him into their home, thankful for the stories he tells of their beloved’s final days. But when people start dying, is it because of David, and can they really believe anything he has told them?

It’s an interesting idea to explore, and was done well. Of course not all of the action sequences were realistic, but that is not what you look for in a film like this. It is best described as a psychological thriller, that, towards the end, becomes more of a dark comedy, adding a twist to the generic action film genre. It references 80s/John Carpenter thriller films, even down to its soundtrack. The conclusion will not satisfy all, as it can feel open-ended, but it’s more about the fun of the story.

I have to commend the leading man Dan Stevens. His character ‘David’ changes so much, and from one scene to another you do not know whether to love him, or fear him. The other cast were good too, but it definitely would have all fallen apart and become silly if Stevens had failed.

Director Adam Wingard introduces you immediately to what the film is going to be about. The opening sequence and title is well done, and you can tell that Wingard enjoyed every moment of the pre- and post-production aspects of this film.

The soundtrack has also received a lot of attention. The 80s feel continued with the electronic score, and I wouldn’t be surprised if it becomes as popular as the soundtrack to the newly-released Guardians of the Galaxy.

Reviews for The Guest either proclaim their love, or criticise it mercilessly. The latter have mostly been done by vocal general audience members who missed that it was not intended to be taken seriously. The former are by online and in-print critics. For those that have studied 80s thriller films, they can see exactly what Wingard attempted to do, and how he succeeded.

The Guest will not be suitable for everyone due to its mature theme, sex scenes, gore, and violence, but it is all part of the story, and not added for the sake of impact. It is different to the current films out there, and that excites me. I believe it can become a new cult classic, and I give it four out of five stars because of its enjoyment factor, and because, even though it was predominately a black comedy, it still adhered to fundamental cinematic techniques.