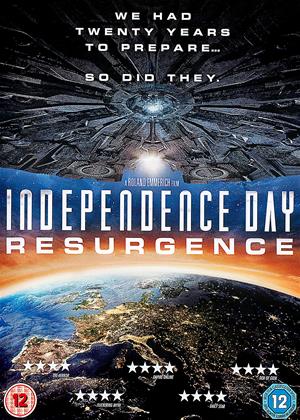 Such a bad movie. The story does not make sense. So much so that this movie should be reclassified from Science Fiction to just Fantasy. It's filled with young actors who can't act. The scenario is so linear that there is no suspense. And they intend to make a 3rd movie? LOL.

Rent it just to make your own opinion but do not expect to be entertained. It's that bad!

I don’t normally review children’s films but this masquerades as an adult film so it deserves all it gets. Think Starship Troopers with none of the creativity, imagination and intelligence. A moronic cgi-fest for brain-dead game-boys. So cynical it even features Chinese product placement for the international market.

For all the cartoonish alien destruction on show, the leading characters never seem to be in any danger. Drama and dialogue are at pre-teen level. Every predictable beat is emphasised by a bombastic score.

Will our heroes survive? Will it end with a lot of whooping? You have to ask? Even the gag reel is embarrassing. Watch and weep.

Taking the first film and moving on sometime in the future. This film uses generally the same cast (minus Will Smith) and actors as before, just a lot older and with less developed characters than before, then adds a few new characters, with even less presence, into the plot! This film is such a mish mash of ideas, the script is awful, badly written and full of cliches. The CGI is all over the place and there is nothing coherent about the cinematography or editing! The general story is that the Aliens Invaders return, bigger and badder than before, but whilst they are physically bigger, they're most certainly not badder and it's difficult to see why this even made it to a storyboard, let alone a full blown film? There is no character development at all, each actor is given a part, but the parts is so thin, too many characters with not enough character development and why on earth they needed to use the son of as a replacement for Will Smiths character is beyond me! Throw in a third Alien presence for good measure, but we never see who or what this third Alien is! In all the film does nothing and goes nowhere, just everything about it is bad! Given the high quality pedigree of the producers and director, it's hard to know why this turned out like to did, but I personally found it boorish, irritating and a drag to watch!

There are damp walls of emulsion more deserving of your time… - Independence Day: Resurgence review by Schrödinger's Cake

The first Independence Day was not a great film, but if you could get past the chest puffing, patriotic waffle, it did have a few redeeming qualities: such as a subtly dark sense of humour, and some likeable, quirky characters.

The follow-up has none of this: it’s simply two hours of patriotic waffle and a cast who are either out to pasture and coasting through their lines, or straight out of a boy/girl band, and much more interested in pouting and strutting than doing any kind of acting stuff.

There are damp walls of emulsion more deserving of your time…

Saw it at the cinema and wasn't impressed. Thought I'd give it another go - I was right first time, it really isn't good. That said, I will probably watch the third film.

Yes its a lesser sequel but still a very enjoyable one. The immense hate for this is puzzling - Independence Day: Resurgence review by Tej

The first film is a classic legendary blockbuster...and the most cheesiest sci fi film of all time! Boy did I love it back then.

Twenty years later and grumpier, I didnt expect much from this given the slating it's already had.

But what a surprise. I had a real blast with this. The cheese continues in what I felt is was a nicely constructed setup sequel that even brings back and respects most of the old cast (apart from Will Smith, which is a pity). The new generation along with old made for an entertaining collaboration to fight off a revenge attack by those pesky aliens. Yes the characters have much less development time with the newer generation lacking the spark that the older generation dudes had. But I love how the world evolved from the first movie and how it ends with a promising epic saga (all with cheese intact). I love how the story evolves.

Alas because of the hate and overall box office, no more sequels are planned which I feel very sad about. I made the mistake and listened to reviewers when this was in the cinema so I gave it a miss. I really regret that now as the film has big screen entertainment all over it.

Oh well, that's how it rolls with our diverse opinions.

If you enjoyed the first one, lower your expectations, you might actually really enjoy this as much as I did. ...Or you might not, given the alarming number of negative reviews. Sigh.

First one was good ....Should have left it alone at that........What a terrible movie.....I love movies and to be honest did not expect too much from this....After being a fairly big fan of the first one which was a few years I thought it cannot be that bad....Average reviews 6/10 so I will give it a shot.....Oh dear ...Never switched many movies of in my whole life but was going to with this.....1/10 should be more accurate......:-(

An enormous, voluptuous spectacle on the outside that feels as empty and shallow from the inside as an overpromised bag of chips mostly filled with air. Independence Day: Resurgence even manages to take the fun out of its predecessor by stupefying the Alien invaders’ intelligence and giving them bigger ships for no reason other than to give humans a chance of success against the usurping forces. In other words: lazy writing.

How is it then, 20 years after a fully rounded space invasion, that the same Aliens who previously attacked Earth grew even stupider upon their return? Hasn’t it supposed to be the other way around? I’m raising these issues because frankly, I don’t know their corresponding answers.

The heroic deeds translate from the first installment almost word for word: the jingoism, exaggerated American patriotism and xenophobia are all alive and kicking, actually kicking the audience in their teeth until either everyone gives up and leaves – or what remains of the jaws is an empty shell where once common sense dwelled.

That’s right: Independence Day: Resurgence is not afraid to show little to no subtlety, which unfortunately enough, it too cannot be spotted thanks to the gazillion CGI particles that convolute the whole ordeal into a mish-mash of random colors and consecutively disjointed events.

Furthermore, Roland Emmerich, together with its ‘top-billing Hollywood stars’ list comprised of Jeff Goldblum, Liam Hemsworth, Bill Pullman as the eponymous President Whitmore and for some reason Vivica A. Fox, embark to save the day yet again, only to fall prey to a small inconvenience known as lack of true essence of character. Whether or not this is the writers’ fault, the director’s hiccup or the producers’ ironclad impatience is neither relevant, nor anyone cares. If you’re thinking on cashing in on an established franchise – at least try to pretend that you care for your audience.

The film itself has some redeeming qualities, like Goldblum’s quirky mannerisms, or a somewhat exciting, neck-breaking space dogfights that give other space films a run for their money. Heck: even Brent Spinner tries hard not to screw up his lines, and almost succeeds in channeling his charismatic ‘Star Trek’ reputation to the aberrant Dr. Okun, for a while that is. Pullman feels like a wasted talent among the ruble, perhaps the studio’s fault – who would know at this point for certain?

One thing is clear however: Independence Day: Resurgence is bigger, louder and well-polished an experience, but lacks heart, character motivations, emotional catharsis and everything that made its predecessor work some 20 years ago.

If you’re so desperate to watch this movie, rent it with friends and take a sip every time a thing that was supposed to blow up in violet flames – didn’t.