4.5 of 5 from 2 ratings
2h 6min
Not released
Play trailer
Gallery 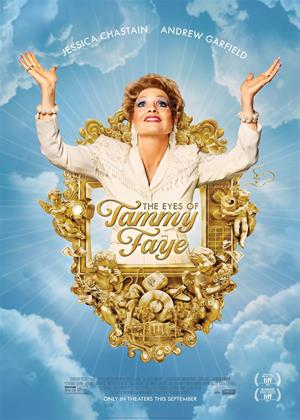 Rent other films like The Eyes of Tammy Faye

Not released
The 24th

Not released
The Tomorrow War

Not released
Take Me Home

Reviews of The Eyes of Tammy Faye

The story of Tammy Faye Baker is one that is filled with tragedy and manipulation. From a distance, it’s easy to laugh at her legacy. Obsessed with Christianity, she was pulled into the world of televangelism and coaxed into believing prosperity gospel. She would eventually break free but most of her media presence was spent in over-the-top makeup and dresses while trying to stress the will of God. Yet this film poses her life more as a cautionary tale where there’s an awkward dark comedy angle.

The best thing about the film is by far Jessica Chastain as Tammy Faye. She gives the role the sincerity and vigor such a figure deserves, portraying the religious icon who just wanted to make a difference. Everything from her emotional pleas for forgiveness to her loud-and-proud musical numbers is quite stunning. It’s just too bad the rest of the film doesn’t reflect Chastain’s appeal.

Consider how Andrew Garfield plays Tammy’s husband of Jim Baker. Garfield plays the character up with a mixture of southern drawl and exaggerated Fargo speak. Jim was a nut, sure, and such a portrayal feels warranted enough for a dark comedy. The problem is that the rest of the film wants to be a dark comedy where the majority of the jokes are based on the reaction of Tammy.

And, really, Tammy is probably the least toxic person in the televangelist scene. She looks the other way on a lot of Jim’s schemes for the good of her mission and family. That’s gross, sure, but she ultimately wants to do better and eventually does when breaking from the flock. It’s a little hard to take joy in the picture when it wants us to laugh at her overdosing on drugs after she found out Jim was cheating on her.

The rest of the performances create a much different film. Tammy’s mother is portrayed by Cherry Jones as a 100% Minnesota mom. She doesn’t play up the role for laughs and actually gives some understated dignity to this picture. Her presence brings some prestige. Vincent D'Onofrio, however, plays up Jerry Falwell too cartoonishly. He strains his voice to give this odd delivery that feels better suited for a skit than a representation of Falwell’s influence and hideous power. These polarizing performances make for a messy film that loses focus easily as it stews in the song and dance of it all.

The film covers a few highlights of Tammy’s life worth highlighting. Her love of gay people and her struggle to fight is present. Her dwindling relationship with Jim grows worse as the scheming and lying Jim goes further and further with his embezzlement. But all of these moments don’t really build. In the film’s quest to humanize Tammy Faye, it forgets to give her a certain arc and becomes a scattershot attempt to show some pity on Tammy and punch on the corrupt nature of Christianity on television.

The Eyes of Tammy Faye is based on a documentary of the same name. The documentary is quite revealing and paints an engrossing story of Tammy’s life. This just feels like the watered-down version that, better suited for a TV movie. Aside from Chastain’s strong performances, there’s little else to recommend in this all-over-the-place biopic.