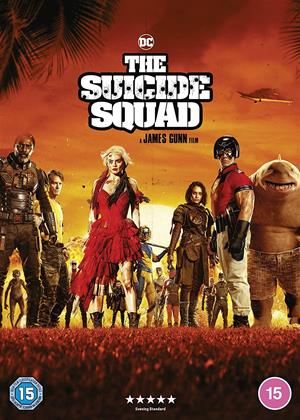 Reviews (1) of The Suicide Squad

This unwanted sequel is marginally better than the boring headache Birds of Prey. The Suicide Squad 2 is unimaginative, long, badly acted, nonsensical, unfunny and hell to sit through. The odd-one liner aside, this had zero going for it. It shows how much James Gunn's style gets smoothed out by Marvel, as this DC film is a director off the reins to the detriment of his honed-talents. This is the first James Gunn filmed that I have really, really disliked - Idris Elba looks lost, John Cena is never good in anything, and the rest of the cast get few opportunities to stand out from the ensuing hell of CGI mayhem. Pluses for me: The Rat was cool, and Sylvester Stallone's Sharks had limited appeal.

This is the last DC film I'm watching. All these superhero movies are the same - how many more films are going to end with the good guys flying around trying to take down a massive world eating/destroying machine/monster - I feel like I'm sitting through the same movie over and over again - didn't Black Widow do the same thing the other week? hahaha.

DC’s Suicide Squad soft-reboot is every bit the Dirty Dozen usage of the DC Comics rogue’s gallery it should have been. Whereas David Ayer’s attempt at a Suicide Squad movie tried to stage the black-ops task force as a gritty street picture that ultimately turned into a generic comic book movie, James Gunn takes a big swing with absurdity to sell the idea of villains working with governments. Not only is it a funny and brutal outing but also one that manages to be highly critical of the rampaging evil of power relations. Not exactly something I expected from a film where an anthropomorphic shark eats somebody whole.

It helps that this ensemble picture doesn’t waste too much time trying to explain the specifics or make you care too much about the characters from the start. Within minutes, we’re introduced to the misfit villains that serve the cold and calculated Amanda Waller (Viola Davis), committed to maintaining the secrecy and disavowing the actions of the prisoners she commissions for dangerous jobs. We learn about the deals made, the explosives in the villains’ skulls, and that the missions are not ones where survival is guaranteed. Remember how in the first film it took almost an hour of explanation to get through all the characters and watch what happens when one of them disobeys and dies? Gunn’s version trims down that reveal to 10 minutes in on heck of a violent opener.

I like how the central character of Bloodsport (Idris Elba) is built up. We don’t meet up with him until after the opener and even then there’s a big hurdle to cross in order to root for him. He has a daughter but, unlike in the last film with a father-daughter relationship, Bloodsport doesn’t like his daughter. He never wanted her and never wants to deal with her. It’s only once his child’s life is threatened by Waller that he considers joining the Suicide Squad because he doesn’t want to be responsible for her death at the hands of something as insidious as a broken prison system. His fatherly instincts are better developed over the course of a mission where he gets to know and love the young orphan of Ratcatcher 2, which isn’t easy considering he has a fear of rats, and controlling rats is kinda Ratcatcher’s thing.

There’s a surprising amount of arcs for a lot of characters as they take off for a fictional South American country to stop a giant starfish from destroying the world, which thankfully doesn’t become the central focus. Harley Quinn (Margot Robbie) returns to the squad and really showcases how desperate she is to avoid toxic relationships. Polka-Dot Man is a deeply depressed man who is still struggling to come to terms with his powers and isn’t sure if he can do anything good in the world when it seems so pointless.

Killer Shark (voiced by Sylvester Stallone) may just seem like the lovable dope of the group with his simple English and limited intelligence but he has a need to be accepted that he wants friends but never felt as though that were something an anthropomorphic shark could have in a land world that fears his kind. Sure, he eats people but he’s trying to improve. He even wants to read despite not knowing how to hold a book.

I dug how Bloodsport and the nationalistic Peacemaker (John Cena) seem to be in a dick-measuring competition with their similar professions of killing yet counter each other in their perspectives on justice. At one point, Peacemaker paints a foul mental picture of standing for liberty in an activity involving a beach and penises. It’s silly but it also tells a lot about the characters, where Bloodsport can spot that Peacemaker will use patriotism to justify any action, be it violent or sexual. This aspect of the characters is pretty unique when they eventually reach the climax and are given a choice of whether to obey Waller and let millions die or take it upon themselves to defy governmental powers. Of all the DC Comics movies, this one manages to be the most political.

The Suicide Squad is a fully-loaded experience of a gutsy comic book movie. It’s willing to not only tread into violent and absurd areas but also go the extra mile with the satire to present something as meaningful as it is fun. The DCEU may have been off to a dismal start but films like The Suicide Squad give hope for the future of this franchise, willing to veer off into postmodern territory that Marvel rarely treads.