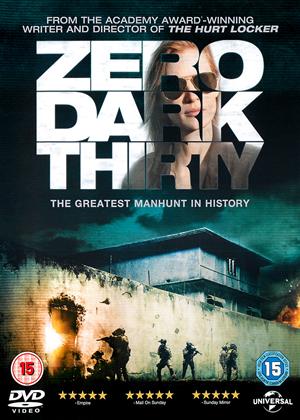 This film is not bad - it is watchable if very VERY long. More like 2 or 3 episodes of a TV drama stuck together though than one cohesive story. Maybe that's because it ranges over 12 years and several countries? Maybe the story would be better served by TV though if that is the case?

This is also one of those films that shows history which is not history, but rather wish fulfilment of Hollywood producers and writers. According to this script, a lone woman - who is of course utterly courageous, compassionate, and superior to all men present (who are against her initially) - is responsible for the talking out of Osama Bin Laden. Yeah right. Sadly, a lot of people will believe this hogwash as fact - and Bigelow really does not need to stoop to such feminist propaganda levels either.

But it's a competent if unexciting movie - and is perhaps best in its initial scenes (which unusually for a US movie show the US forces in a bad light) and its final scenes (which are exciting to watch). Some well-drawn characters (oddly, the men are much better drawn as characters than the heroin women), interesting scenes, and a sense of menace in Pakistan and Afghanistan which is certainly true to life.

Subtitles are recommended too even if you aren't hard of hearing, just to understand what everyone is saying over the noise!

The subject matter is ostensibly interesting but the film itself is boring and hugely overrated.

The main character is completely one-dimensional - after nearly 3 hours I knew nothing about her except that she worked for the CIA.

An excellent thriller, brimming with suspense, even though we know how it ended... - Zero Dark Thirty review by Philip in Paradiso

The film dramatizes the nearly decade-long international manhunt for Al-Qaeda leader Osama bin Laden after the September ‘11 attacks. This search, led by a stubborn and sharp female CIA officer (Jessica Chastain), leads to the discovery of bin Laden’s compound in Pakistan and the military raid that resulted in his death on 2 May 2011.

The film is long (2 1/2 hrs), but it should be pointed out that only the last 30 mins show the actual raid on the compound -- and in a highly realistic way. The first 2 hrs focus entirely on the search for bin Laden, showing how the CIA managed to track him down, also using torture in the process -- the early part of the movie, in this respect, is not pretty.

It is quite fascinating to see how the Americans succeeded in pinpointing the exact location of his residence, in Pakistan: this was no mean feat, considering the circumstances.

I thoroughly recommend this film, and the acting is good and convincing throughout. For the full facts: go to -- https://en.wikipedia.org/wiki/Death_of_Osama_bin_Laden

An uncompromising, gritty and realistic political thriller and a dramatisation of the CIA's hunt for Osama Bin Laden. This is first class modern film making and a serious attempt at unravelling the morals and complexities of the US' 'War on Terror' campaign following 9/11. The film gained controversy in its scenes of CIA torture of suspects at 'black sites' in that it was accused of condoning the use of waterboarding and similar methods. This is wrong, those scenes are highly impactive and shocking and Kathryn Bigelow, the director, meant them to be. The film opens the debate about the use of such methods especially by a western democracy in the 21st century and admittedly the narrative weaves a difficult and blurred line allowing the viewer to see the complexity around what is happening. But it is clear the film condemns these things and questions the political morality at play. Jessica Chastain as Maya, a CIA operative, who becomes dedicated to locating Bin Laden, is at first repulsed by the torture she witnesses but late comes to utilise it's power to get what she obsessively wants. The film mixes in real footage to make the story seem all the more potent and includes scenes of the London 7/7 bombings. Ultimately this is a riveting thriller about the dirty world of intelligence gathering against a highly dangerous enemy and the surveillance scenes and climactic special forces attack on a compound are action cinema at its best. This is a breath taking piece of modern cinema and definitely a film to see. If you've missed it then I urge you check it out you won't be disappointed.

Kathryn Bigelow has directed an Oscar-winning followup to her previous Oscar-winner 'The Hurt Locker'. Only this time the Oscar was not for 'Best Picture', but (bizarrely, given the fact you'll probably need to use the subtitles to hear what's going on) for 'Best Sound Editing'. And that gives a clue - it isn't 'best picture' quality.

The film is a lengthy (2½ hours) pseudo documentary on the 10 year hunt for Osama Bin Laden, starting in September 2001 and culminating in his shooting in a raid on his compound in Pakistan in May 2011. The first 2 hours of the film deals with the questioning and torture of assorted detainees to obtain information and the following of several dead end leads, with the lead character (Maya, well played by Jessica Chastain) focusing relentlessly on a single named but unidentified suspect, a courier for Bin Laden. The final ½ hour covers the raid.

The film is a drama - but I didn't find it very dramatic. Yes, bits of it were tense, but frankly I can't see what the excitement was about. The characterisation was shallow, the events shown were simple snapshots, there was no placing of the events into a wider context. The attack on the World Trade Center led to not only a manhunt for Bin Laden but to full scale wars in Afghanistan and Iraq. And an attempt in the film to place the July 2005 London bombings in that context is misguided as these were carried out by home-grown terrorists without help from al-Qaeda / Bin Laden. I found the focus on a few individual CIA operatives to be a very shallow device, and if I can spot errors in the film it makes me wonder what other errors there are. But hey, this is a Hollywood movie...

The film left me cold. It's an emotionally detached film whose central character is recruited out of high school by the CIA and the single assignment she has worked on is the hunt for Bin Laden, has no friends, no boyfriends. I didn't feel any involvement with the characters nor the subject matter, which was (perhaps understandably) relentlessly US-oriented. I wasn't moved by the waterboarding / torture scenes. I certainly didn't enjoy it - but then it's not the kind of film you 'enjoy'. And I didn't like it very much.

I did enjoy the appearance of the late James Gandolfini as the CIA Director - despite his f-ing and blinding, I understand that at least was true to life...

3/5 stars. Pretty average stuff for me.

An intense but captivating movie Kathryn Bigelow’s Zero Dark Thirty tells the story of how a CIA investigation lead to the location of the most wanted man in the world, Osama Bin Laden.

Starring Jessica Chastain (The Help) as Maya, a novice CIA agent recruited straight out of high school who believes that the key to locating Osama Bin Laden lies in locating one of his most high ranking officers, one of several brothers working for Al Qaeda. Doubted by many of her superiors most of Maya’s initial leads go nowhere and it appears that the man she is looking for may have been dead for many years; however as the film progresses the hunt for Bin Laden continues and, covering an entire decade, the film details the lengths to which the American forces go to in order to apprehend this mass murderer.

With detailed and first person experiences of incidents many of us witnessed on the news Zero Dark Thirty is both moving and mesmerising. The character development slow and intricate each event plays out as though entirely new and seen for the first time.

With some violent and genuinely unpleasant scenes Zero Dark Thirty is not an easy film to watch, Maya’s determined attitude sometimes causes her to seem rather unlikeable, whilst the interrogation tactic’s used by the American’s in the first half of the film certainly leave them appearing as a particularly unlovable bunch.

This once supposed “necessary evil” is stopped with a firm hand upon the inauguration of President Obama, yet Maya’s motivation does not waver. Interestingly there is not heart breaking back-story that explains Maya’s behaviour, Bigelow chooses to stick solely with the facts and events that directly affect the investigation; giving an edge to the patriotism shown by Maya that goes beyond the regular duties of state.

By the end both Maya and the audience are exhausted (which is unsurprising considering the film’s two and a half hour length); the tense and gripping ride ending in a tight but disorienting raid that realizes all of Maya’s hard work. Feeling put through the wringer Maya collapses on a plane, finally returning to America, whilst the audience sits back – finally able to let go of the edge of their seats and release their long held breath – revelling in the successful execution of a military operation so fascinating and powerful it seemed more real than watching the events unfold on the aforementioned news.