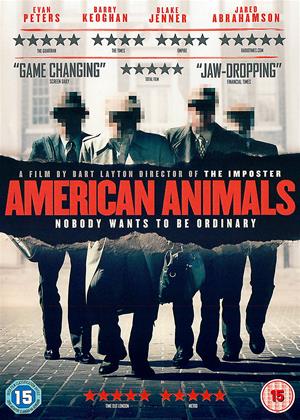 This is a fascinating true story, and to ram home that point, occasionally the real-life characters (the 4 young men who did the heist and their parents, and the librarian) give interviews to camera.

I'd never heard of this story so found it interesting, especially the psychology involved.

But those who like shoot-up-up movies won't like this - it's all about the theft of rare books from a library. No shots fired.

Interesting idea for a movie, based on a true story that I had not heard of before. Some of the actual criminals and a victim appear.

Sadly the movie is very poor, the storyline can not decide if the young criminals should be hero’s or villains.

They are vicious losers.

The acting is wooden, then suddenly bursts into rage, as if to make up for the poor script.

I hope the actual criminals did not get paid a penny for this movie, and that any fee went to the lady Librarian who was attacked and hurt in the robbery.

Crime did not pay - American Animals review by NC

Quite bizarre having the actual 4 guys in amongst the story telling.........could almost had them do the film anyway?

Good example of how the American dream can back fire.

Nice tweak of the genre - American Animals review by TE

Barry Keoghan is excellent and outshines everyone else here.

It's interesting to see and hear the actual men in the story of the heist, but there are times when pauses for interview segments interrupt the build-up of the narrative too much.

It's good to see such a different (and realistic) take on the whole heist genre.

Bart Layton's documentary 'The Impostor' was gripping in its tension and mystery, but this film is nowhere near as good.

It is a mix of the talking heads of the real criminals and dramatisation. But there is a triumph of style over substance with tricksy editing and unreliable narrator elements. The 'characters' are bored middle-class male university students who are entirely unlikeable, uninteresting and amoral - one of whom seems to be a psychopath.

The title sequence showing details from Audubon's 'Birds of America' depicting the blood and terror of the kills of birds of prey is really powerful and one of the best things in the film. Too bad the rest didn't live up to this early promise.

How unflattering to American youth is this film? Hard to believe 4 college students could be so stupid, drugs must have been involved surely. Didn't really like the juxtaposition between the real characters and the dramatic characters, would have preferred the (barely believable ) story to unfold on its own. Unlovely film with unlovely characters and rubbish F strewn dialogue but quite fascinating all the same!

This was an interesting way of telling a true story, by including the people themselves it offers a grounding in reality to what occurred. The way they covered the different version of the story given by those that took part is cleverly done, allowing the viewer to decide which they believe, Probably not as gripping as "The Imposter" but well worth a look if you want something different than the usual guns and car chases involved with heist films.

How not to carry out a robbery. A true story (well probably approximate) unfolding the ludicrous idea of stealing rare books from a library in the states. Basically the gang is a bunch of useless students with a grudge against authority. Believable all the way and if you just forget this isn't a daring heist movie with the usual guns and over the top characters you will enjoy it for what it is. Interviews with actual participants and parents in the farce are slotted in at intervals to add to the feeling of authenticity. I loved it as I always feel a true story is better than fiction and often weirder!

As with some of the others reviewers, I hadn’t heard of this story. Years ago I spent a few weeks at University if Kentucky & Transylvania University & remember the beauty of the campuses. Sadly I didn’t go to the library to see the books in the secure section. Amazing true story, not based on true story, but the real thing. It was interesting seeing the real men who committed the heist. Very well done.

What real crime is - American Animals review by Gwydion

As they say, it is a true story.

You see how crime is messy and cruel. Not romanticised as in most films.

American Animals attempts to take on a tricky picture that wants to both tell the truth of a college heist gone wrong and also play it up for stylish laughs. It’s this blurring of realities, however, when the film incorporates interviews from the true men behind the robbery in an oddly quirky manner, the film falters at trying to weave some Adam McKay style comedy out of the absurdity and frustrations. Despite a solid production, the film replicates the heist aspect by portraying itself more as a film with better planning than execution.

The criminals in question are Warren Lipka, Spencer Reinhard, Chas Allen, and Eric Borsuk, played by actors for the dramatization and playing themselves for interviews. When the heist goes down, they’re all enrolled at Transylvania University and find themselves in an aimless stupor. They mill about campus trying to find something to do and take some direction in their life. And then, after a tour of the campus library, one of them has a terrible idea to rob the archived paintings in the library valued at $12 million.

Most heist films meant to be slick and entertaining, as American Animals aims to be, is creating a relatable nature; a desire for the steal. But how much can we identify with these characters when their heist comes from little more than something to do. I can’t exactly say I enjoyed the precision editing of how they imagine the caper going off in their heads like an Edgar Wright film when their inspiration comes from watching a bunch of students light a grocery cart on fire.

I say this only because the one part of their plan that goes horribly wrong is their subduing of the librarian that opens the archive for viewing. In their heads, they imagine they’ll knock her out cold and they can go about their business. Instead, they hold her down as she is screaming and crying for her life. Most important to note is that this is not staged in a comical manner as though the heist has degraded into slapstick absurdity. It’s terrifying and the desire to see if these kids can successfully swipe the paintings out of the library becomes far less intriguing, despite the expert level of direction in how this scene goes down.

The film becomes so ingrained with tracking the story that varies from the criminals that the tone becomes vague. On one level, one might think we’re meant to identify with the despair of a nihilistic youth that leads to robberies such as these. But then in the bickering of interviews with how certain events went down, the film takes odd shifts between the bigger themes and the crazier aspects, ultimately leading to a film that just kind of shrugs at the crazy without saying much about it. Yeah, the art theft was pretty bizarre and very off-putting but, look, their first attempt involved terrible old people make-up! How wacky and not at all distracting compared to the rest of the film.

American Animals merely finds a handful of theatrical elements to exploit from such an unusual caper. It’s very much akin to if Adam McKay were to take a whack at the true story behind Masterminds, another true crime story with people making stupid mistakes. It’s as though the real people burst into the room while the director was telling this story and all the tonally sound segments are sacrificed more in the name of respectability towards these individuals who went onto somewhat successful lives. And there’s only so much clear-headed direction that can be mustered with so much input and no focused direction in what the film is trying to say. Somewhere between a documentary and a docudrama, the movie never lands proper on either.