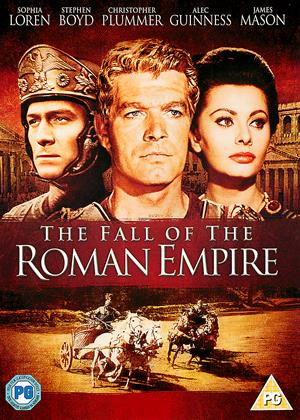 Rent other films like The Fall of the Roman Empire

Reviews (1) of The Fall of the Roman Empire

It's no coincidence that this DVD includes a trailer for "Gladiator". Both films are alternate versions of the events following the death of the last of the "Five Good Roman Emperors", Marcus Aurelias, and the accession of Commodus, the first of a long and ultimately fatal series of bloody awful rulers. Also, both films assume (for reasons based entirely on drama and not at all on history) that Marcus Aurelias knew his biological son was a bloodthirsty megalomaniac, wanted to nominate somebody else as his successor, but was assassinated before he could do so. Thus it's fair to say that "Gladiator" is a sort of remake.

Which is the better film? Undoubtedly "Gladiator". I'm a sucker for a good epic. I'd give "Lawrence Of Arabia" (which shares some of the cast of this movie) six stars if that was possible. But this epic is frankly overrated. I've given it three, after thinking about two, but ultimately it's a two-and-a-half-star film. Does the Roman Empire actually fall? No, not as such. It symbolically starts to in the last few minutes. Don't expect Rome to spectacularly burn before your very eyes. And the epic battle scenes aren't that wonderful either - bear in mind that this has a U certificate. "Spartacus" goes much, much further in every respect. And quite right too, because when you're telling this kind of story, it matters. Though full marks to second unit director Yakima Canutt - when you see the name of that legendary western stuntman in the credits, you can safely assume that any scenes involving horses will be spectacular. And he really pulls the stops out here.

What lets this film down isn't the pacing. "Lawrence Of Arabia" is much longer, and not much more actually happens. yet it never loses your attention for a moment. What it needs is better acting. James Mason gives it his all as a potentially one-dimensional good guy, but ultimately his character is completely irrelevant. Alec Guinness is as professional as he usually is as Marcus Aurelias, who dies early in the film, but if you've seen "Star Wars", you'll recognize his default performance in movies he doesn't truly connect with (compare his Prince Faisal in "Lawrence Of Arabia", who manages to be far more multi-faceted with even less screen-time). But Stephen Boyd is painfully wooden as the lead. What sane Emperor would have tried to nominate this pedantic moron as his successor? Christopher Plummer's Commodus is a far more sympathetic character (and a far better acted one) because it's not really this weak, flawed man's fault that he ended up with a job he's wildly unsuited for, and it's not until the final stages of the film, when his fragile sanity has totally crumbled under the pressure, that he's actually evil. And as for Sophia Loren... Well, just watch those. Strange. Early scenes where. She keeps. Pausing for no. Apparent. Reason. While gazing vacantly into the. Middle. Distance. You'd almost think, if she wasn't an A-list actress, that cue-cards might have been involved...

In short, a halfway decent second half of a double bill, if the other half is "Spartacus " or "El Cid". Though given the lengths of those films, they don't really need a B-feature. A rare case of the remake (or in the case of "Gladiator", unofficial semi-remake) being far better than the original. Not actually bad, but strictly for nostalgia buffs.