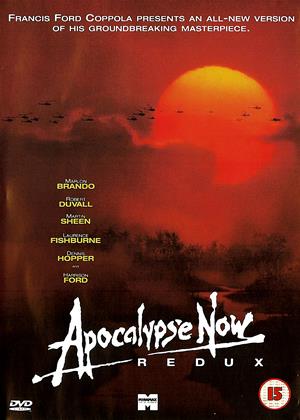 Release Date:
13/06/2011
Run Time:
439 minutes
Languages:
English DTS-HD Master Audio 5.1
Subtitles:
English Hard of Hearing
Formats:
Pal
Aspect Ratio:
Widescreen 2.35:1
Colour:
Colour
Bonus:
Disc 1:
This disc includes the following:
- Apocalypse Now – The 1979 Cut
- Apocalypse Now Redux
- Audio commentary by Director Francis Ford Coppola
Disc 2:
This disc includes the following:
- "A Conversation with Martin Sheen and Francis Ford Coppola" A fun chat with the star and Coppola.
- "An Interview with John Mlllus" by Francis Ford Coppola. ^ Another really interesting gabfest with Coppola and the talented screenwriter.
- "Fred Roos: Casting Apocalypse" Film's casting director talking about the hundreds of actors tested for various roles.
- "Apocalypse Then and Now" Some brief snippets of the Roger Ebert interview from Cannes with insight into both versions of the film. ¦ - -- "2001 Cannes Rim Festival" Complete Francis Ford Coppola interview with Roger Ebert at the 2001 Cannes Film Festival.
- "PBR Streetgang" Profiles the actors playing Willard's crew, including 14 year old Laurence Fishburne.
- "Monkey Sampan Deleted Scene" An unusual "lost scene" featuring the restless natives singing "Light My Fire" by the Doors.
- "Collection of Additional Scenes" A collection of 12 window and pillar-boxed curios with timecode captions.
« "Destruction of the Kurtz Compound" 777e rejected final credits sequence with audio commentary by Coppola.
- "The Birth of 5.1 Sound" A fascinating and way too brief look at how Apocalypse Now led to a revolution in film surround sound design.
- "Ghost Helicopter Flyover" An interesting look at the surround design for this one sequence.
- "The Music of Apocalypse Now" An overview of the different artists featured on the soundtrack.
- "The Synthesizer Soundtrack by Bob Moog" article by music synthesizer inventor Bob Moog.
- "Heard Any Good Movies Lately? The Sound Design of Apocalypse Now"
In-depth analysis of the work of sound designers.
- "A Million Feet of Film: The Editing of Apocalypse Now" Scenes with editor Walter Murch at work with his Moviola.
"The Final Mix" The process of editing that took almost 1 year. - "The Color Palette of Apocalypse Now" Technical aspects of the three strip dye transfer Technicolor process utilized on the film.
- 'The Hollow Men" Brando rec
Disc 3:
This disc includes the following:
- Hearts Of Darkness: A Filmmaker's Apocalypse the ultimate feature-length documentary on the making of Apocalypse Now directed by Eleanor Coppola
- John Milius complete script with notes by Francis Ford Coppola - Storyboard Gallery with more than 200 drawings
- Photo Archive including: more than 100 photos from behind-the-scenes, press kits, and Mary Ellen Mark photography
- Marketing Archive including: poster gallery, lobby cards, and theatrical trailers

Great... except for *that* scene. - Apocalypse Now review by MN

On the whole I'm a big fan of the redux. Adding a good hour of footage gives it an even more languid and meandering feel as it slowly edges its way up the Nung river and towards its inevitable conclusion, but the plantation scene, as numerous others have noticed proves a big exception. It's too long, boring and heavy-handed, and just feels completely superfluous, especially coming so late in the film when you feel it really ought to be moving towards the main event.

Otherwise, the bluray looks and sounds fantastic - stunning even, and without that one scene, I think this version could be near-as-damnit perfect.

'Apocalypse Now' is widely regarded as one of the finest films on the Vietnam war – but having seen it several times now, I am uncertain whether it is a pro- or anti-war film. This is the so-called 'redux' version released in 2001 which includes several scenes cut from the original 1979 version, principally a lengthy scene among a French-colonial plantation owning family. As far as the storyline goes, it is this: Captain Willard (played by Martin Sheen) is tasked with venturing far inland and across the Cambodian border to kill a mysterious Colonel Kurtz (played by an overweight Marlon Brando), a much decorated Special Forces officer who has gone rogue and is operating his own forces outside of any US control. He sails far up the Nung river in a small river patrol boat and on the way encounters a series of bizarre incidents and characters – random senseless killing of innocent civilians, airborne attacks to the music of Wagner, napalm attacks, surfing while under fire, water skiing behind the patrol boat, entertainment by Playboy Playmates etc. And at the end he accomplishes his mission, with Brando echoing the ending of Joseph Conrad's novella 'The Heart Of Darkness', his final words being 'The horror! The horror!'. Be advised that the film is *very* long at 3 hours 14 minutes (PAL DVD) - but it's definitely worth it. Highly recommended - 5/5 stars.

A quality film, cast, and Blu Ray transfer (stunning quality). A long film, but never boring. This type of film would not be made nowadays, but it is not all pretentious.

The Horror of War - Apocalypse Now review by CP Customer

A case study of the ‘surfing scene’ out of Apocalypse Now (1979), directed by the political liberal and dove Francis Ford Coppola, illustrates the ways in which the Vietnam War can be depicted through stylised ‘message films’. Captain Kilgore (Robert Duvall) of the Air Cavalry attacks a Vietcong held village while playing Wagner’s “Ride of the Valkyries” on the loud speakers of his helicopter. Once on the ground, Kilgore strips of his shirt and scarf and prepares to go surfing with explosions and gunshots all around. As fighter jets bomb the forest behind the Vietcong village, Kilgore says happily “I love the smell of napalm in the morning….smells like victory.” Applying exaggeration and artistic fantasy, Coppola creates an insane nightmare of brutality and horror – his metaphor for the phenomenon of warfare and individual understanding of the Vietnam War.

This is a LONG film - so make time for it, ensure you won't be disturbed, turn of the lights and press play.

Completely immersive experience - and the plantation scene added towards the end gives some much-needed historical background. People forget it was the FRENCH who had Viet Nam, Cambodia and Laos as colonies, and arguably all the problems in the region which led to the Viet Nam war were caused by their brutal rule and utter intransigence in refusing these countries independence in the 1950s. Britain willingly gave up its empire; France refused and caused the Viet Nam war.

This is supposedly based on Joseph Conrad's novel Heart of Darkness, but only in its theme of a boat going up a river into the dark interior of a continent. And you can't copyright an idea!

Light up and blow your mind. - Apocalypse Now review by NC

Old film now. Most people only know Vietnam as a great holls spot, but back then was a mind warp for the USA. Very powerfully made. Deerhunter only other Vietnam film that cracked it, along with the very heavy Killing Fields.

The whole music and photography moved this film into an opera of violence and destruction.

Like the Civil War, Korea, and the Indian Wars/annihilation, this is yet another part of US history they would like to forget ...............

Apocalypse Now remains one of the finest motion pictures I've ever seen. It provides an experience that is rare in film watching, a sense that you are watching something very special and a film that is much much more than what is on the surface. Set during the Vietnam War this is not really a war film although it has combat scenes, for example the helicopter attack on a small village which has reached iconic status in cinema annals, this is a a story that skirts along the edges of fantasy and mysticism questioning along the way humanity's need for war and conflict and the role of a man's soul. Based on Joseph Conrad's novella 'Heart of Darkness', which is set in Africa and not a war story, this is a story of a journey and concerns burned out special forces Captain Willard (Martin Sheen). Desperate for a mission he is sent on a small river patrol boat, with the four man crew, up a river through hostile territory illegally into Cambodia where he has to find and assassinate the rogue American Army Colonel Kurtz (Marlon Brando). The journey is hazardous in ways unexpected as the men involved have to deal with their inner demons as well as the enemy and the land. There are basically three distinct cuts of this film available, the original Theatrical release, a fuller cut called the Redux version in which all scenes removed for the former cut were reinserted and the Final Cut. It is this last one that is the one to watch. Director Francis Ford Coppola carefully re-edited the film into this cut and in doing so created the film he always intended. It is truly remarkable. As the boat journeys deeper up the river the film takes on elements of a surreal, fantastical story culminating in arriving at Kurtz' 'kingdom'. Coppola's use of light and shadow, colour and mood shakes you into not really knowing what sort of film you're watching. As a consequence it's highly rewarding as it challenges you to understand the themes going on here. In so many ways this is a masterpiece and leaves a deep impression. It's exciting, haunting, enigmatic and quite beautiful. The cast are impeccable. Sheen carries the film, it's his best performance and he's aided by Harrison Ford (in a small role), Albert Hall, Frederic Forrest, Sam Bottoms and a young Laurence Fishburne. But the stand outs are Robert Duvall as the crazy Colonel Kilgore, who leads the attack helicopters, with his love of Wagner, surfing and the smell of napalm; and Marlon Brando as Kurtz, a mesmerising performance and one that you'll not forget - "the horror, the horror". A cinematic masterpiece unequalled since it was first made. A film to savour time and time again and, if it affects you like it has me, a film you'll want to see again and again. It is truly a work of art.