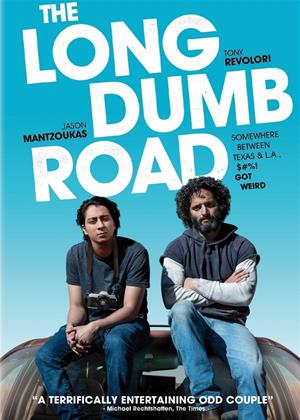 Not released
What They Had

Not released
A Teacher

Reviews of The Long Dumb Road

The Long Dumb Road is a road trip movie that is about as typical as the average title makes it sound. That being said, there’s a somewhat casual nature to its stroll down familiar territory. It’s a film with literal intentions to slow down, take in America, and stop to smell the flowers along the way. It’s a pleasing picture to be sure just nothing all that new, bringing light smiles.

We at least have two likable leads on the journey. Tony Revolori plays Nathan, a young student on his way to California to start his life in art. On the dusty road, he runs across Richard (Jason Mantzoukas), a mechanic who is fed up with his work and wants to head off on a trip as well to better find himself and deal with his past regrets. The two hit it off rather well with a cozy assurance that this will be an offbeat charmer. Their opening conversation about Fast and the Furious movies is incredibly amusing, the way Nathan talks about the current ensemble of the film franchise while Richard, who hasn’t seen any of the films past part three, is eccentrically blown away that the Rock is now in the cast.

Richard becomes more than just a goofy companion as he slips into the relatable drama rather early. He convinces Nathan to make a quick stop at the house of an old flame who he thinks he can rekindle a romance with. While Nathan has a bumbling encounter with the woman’s teenage daughter, Richard struggles to find the right words that he wants to start over and is bitter when realizing it’ll never happen. Jason Mantzoukas has always been skilled at being a goof on screen but seeing him mix that funny act with someone who is deeply troubled by his own shortcomings make for a unique performance.

And so the duo continues to mosey along the road, Nathan goes tries to come out of his shell in his own shy way while Richard’s extroverted energy becomes too much to handle. This creates an interesting dynamic as with the obligatory scene where the two of them will encounter two women that fancy them. Over breakfast, Richard opens up too much about how disgusting he finds the Rolling Stones still being considered sex objects. When his date says she’d still have sex with them, that’s the end of the relationship as far as he’s concerned, making it bitterly known this isn’t going to work out. It’s troubling to see him be so terrible at love, but also comically refreshing in his honesty.

As mentioned previously, the film follows the familiar format of every other road film with the many expected moments of partying and being without a car. The subgenre remains of a similar structure to the likes of a romantic comedy, where the formula is maintained and the characters are relied upon to make the film shine. To its credit, the likes of Revolori and Mantzoukas are likable enough actors working well within their strengths for such a film. They just don’t really break out further. I kept waiting for a moment of Mantzoukas fully exploding as his goofier side shrinks for a more true character, but perhaps that would rob the film of its somewhat gentle approach.

The Long Dumb Road has a few charming pitstops along the way of a road I’ve been down many times before. It won’t redefine the road movie formula, merely tinkering with a few little elements and letting the duo do their thing an easy manner, where the performances are more amusing than the story. There are far worse road trip movies of lesser comedy, but also many more that pep up enough to venture further out of their lane. This is just a pleasant Sunday drive with two best buddies and a somewhat theraputic break from the hustle and bustle of tired raunchy jokes. Sometimes you just have to stop and smell the roses, or at least appreciate how Mantzoukas is a stellar comedic talent.