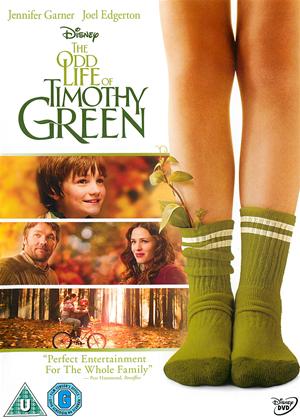 Rent other films like The Odd Life of Timothy Green

Reviews of The Odd Life of Timothy Green

Husband a wife Cindy (Jennifer Garner) and Jim (Joel Edgerton) desperately long for a child to complete their happy family; their inability to conceive is crushing until one stormy night, after writing down the attributes they would wish for in their perfect child, the couple bury their dreams in a box in the yard. The next morning however they awake to find something wonderful has finally grown from their love.

The Odd Life of Timothy Green is a surprisingly charming family fantasy, one which manages to capture the hardships of reality and balance them wonderfully against the beautiful whimsy of imagination. Blessed with their odd garden grown son Timothy, whose time with them is sadly limited, the Green’s spend the duration of The Odd Life exploring what it means to love and to be a family.

What makes The Odd Life of Timothy Green such a success with the younger audience (though I hesitate to say that the very young will take much pleasure from the film’s comedic whimsy) is the bold way in which is both accepts and plays on the stranger aspects of the story line. The idea of a leafy plant boy popping up in the back yard over night is undeniably strange and the way in which the film makers choose to use the bizarre-ness of the premise to their advantage is both courageous and triumphant.

Adult will be taken in by the adult performances in the film, Garner’s performance in particular is a strong and emotionally solid interpretation of a mother both grief stricken at her own inability to conceive and awed by the presence of Timothy that it manages to both sober and lift ones own emotional psyche. Edgerton’s stoic father is somewhat more of an obvious choice of character traits, yet the fear of loss that lurks behind his sometimes stand off-ish nature will be familiar to any adult who has experienced loss.

Overall The Odd Life of Timothy Green is a rather quiet but pleasantly entertaining movie, one that both occupies the attention of children and develops the emotional literacy of adults; though such phrases may lead to vast expectations of what is ultimately quite a small and intimate film, I believe that many an audience member will find themselves surprisingly contented with the film’s tone and hopeful finale.