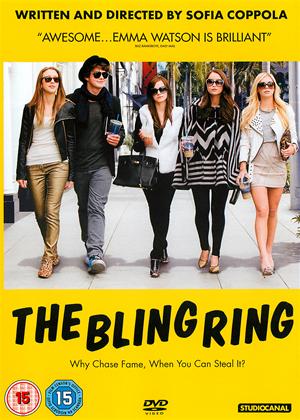 Reviews (1) of The Bling Ring

Once again Emma Watson shows that she was destined for stardom, Potter or not, as she shows that neurosis isn’t the only problem her characters can suffer with. Light fingered Nicki and her friends steal the show in Sofia Coppola’s film inspired by an article in Vanity Fair.

Nicki and her friend Marc (played by Israel Broussard who is also excellent) are part of a group of teenagers obsessed with celebrity culture; the clothes, the shoes, the drugs and the money are what draw these kids like moths to the limelight; unable to reach the heights of fame and fortune themselves they decide that they’ll borrow it from the stars they adore instead.

Following celebrities’ movements in and out of Los Angles Marc, Nicki and co break into the empty mansions of big names such as Paris Hilton and Lindsay Lohan in order to steal clothes, shoes, handbags, money and anything else that isn’t nailed down.

Thanks as much to director and actors alike the obsession the protagonists have with clothes becomes our own, as they preen themselves in front of glided mirrors we see ourselves and as they snort cocaine from extravagant coffee tables we experience the same glittering high.

Based on a true story Coppola creates a fantastic experience in The Bling Ring, tying viewer’s right in with the characters’ every moment, every motion and every desire. The film sparkles like the dresses in a certain Hollywood closet and the final consequences are both bitter and satisfying.

I will quickly end my review here, without giving too much of the ins and outs of the story away, and finish simply by saying that for Watson’s performance alone this is a must-watch feature.