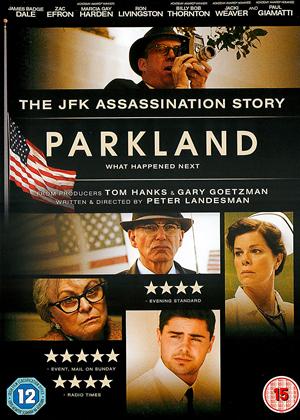 Highly recommend this to anyone who is interested in the historical aspect of the Kennedy assassination (rather than the conspiracy theory aspect). The film itself doesn't deal with Oswald's guilt or innocence but simply recreates the accepted sequence of events during those four days, i.e. the assassination, Oswald's subsequent arrest and murder, and the actions of the doctors, nurses and law enforcement agents in Dallas.

This film was excellently filmed and acted. The people who had been in the background when John Kennedy was assassinated were bought to the fore. These were people who tried to save his life, but have never been mentioned before. The events surrounding this sad event have been explored many times, but it was interesting to have a different viewpoint presented. This film is definitely worth viewing.

While the subject of the death of John F Kennedy has been done to death in movies and television (JFK, Mad Men, Killing Kennedy), Parkland seems oddly relevent considering its release on the 50th anniversary of his death. Despite that the film takes a different tack from the rest as it looks to the people surrounding the shooting and how their lives changed and were effected by what they saw that day.

The film mostly follows the men and women working at Parkland Memorial Hospital in Dallas as they get word of the shooting and rally to try and save Kennedy’s life. While they try desperately to revive him, Lee Harvey Oswald is tracked down and his family must come to terms with his actions and a moment of pride for an amateur cameraman turns into a turning point in the chase to find Oswald. All the while the secret service and everyone in the motorcade must move past what has happened quickly for the sake of the country.

While JFK was an endlessly ponderous film that tried (and failed) to get inside the heads of the perpetrator of the crime, Parkland is a tale told with urgency. Everything happens quickly as the film tries to keep you on the edge for as long as humanly possible. While it delicately handles showing the horrifying video and depicting Jackie Kennedy, the film captures every little moment, giving viewers enough time to form their own idea of the day and its many effects.

However the film really shines in its final moments, not just because it finally allows viewers to slow down and contemplate the films message but it also shows the character of America in general, the idea that the American people can survive any hardship as long as they face it together. It’s an incredibly moving feature by first time director Peter Landesman and it captures the spirit of everyone involved in a unique way.

Ultimately it tells a story told many times before but through the eyes of the people outside of the situation, the ones who cannot explain what has happened but can still feel grief regardless and watching these people come back from it is a joy even if the film itself is about the tragic death of a man.